Dinosaurs and other prehistoric animals, fossils, fossil-found locations, paleontologists and contributors to Paleontology and Paleoanthropology as well as Natural History Museums on stamps, postmarks and postal stationeries issued in 2019

If you know about any other Philatelic item related to Paleontology or Paleoanthropology, issued this year which is not mentioned below, please inform me.


Some Books about Dinosaurs and other prehistoric animals issued in 2019 and 2018.

More Paleophilately related books can be found on the Books page of this site.


Notes:
[1] On April 5th 2019, Post of Portugal issued a big set of 13 stamps dedicated to various museums in the country.
The stamp for the Geological museum of Lisbon shows a Jurassic Ammonite on the front.
Two more stamps of the set should be also considered by Paleontology stamps collectors: Natural History museum of Lisbon and Science Museum of the University of Coimbra.

More than 120 million years ago in this place, Enciso, lived dinosaurs.
They lived in a unique enclave, in the ancient Sea of ​​Tethys, where they left their mark.
Today we continue to be amazed with its habitat, its diet, its way of life, hunting ... that is, with the authentic nature of the great saurians.

[3] The US "Trex" stamps design based on original artwork by Julius T. Csotonyi, a scientist and paleoartist who also designed dinosaur stamps of Canada in 2015.

[5] Unlike in 2017, the FDC was issued together with stamps and both were cancelled at the First Day Ceremony. The Ceremony took place at the Armenian Geological Museum. In the background you can see the skeleton of an approximately 600,000 years old Mammuthus Trogontherii who was found in Armenia in 20th century.
For more details, please go here.

Note: This stamp was issued by an unrecognized, self-governed, or disputed territory. It can be used inside of the territory, and in some cases even for international mail.
However, according to the Federation Internationale de Philatélie (FIP) regulations, issues from countries that are not recognized by the Universal Postal Union are not allowed in exhibitions organized or sponsored by FIP. The FIP recommends that collectors avoid these stamps in their collections.

Notes:
[L1] On September 12th, the Ministry of Information of Abkhazia, issued a stamp depicting an ammonite among many other stamps. The Ammonite stamp has a face value of 10R, the domestic letter rate. It was issued as mini-sheets with both perforate and imperforate variants. The title of the issue as written in both Abkhazian and English was “Archeology of Abkhazia”. Unfortunately, it is not the first time that Postal Authorities around the world have mixed up Archaeology with Paleontology.

P.S. In 2017, Russian Post and Abkhazia signed a cooperation agreement, according to which the Russian company will provide forwarding of international shipments to Abkhazia.
However, I been told that Abkhazia Post considered their new stamps as collectible items only. So even when enough postage is affixed to the envelopes, the sender is still asked to pay enough cash to cover the full postage cost. Only after that, Abkhazia post will then mark the envelope “postage paid”.
The 2020 MICHEL stamps catalog added Abkhazian stamps to their list and started to assign issue numbers for each stamp.

[L2] On November 15th 2019, Postal Authority of Donetsk People Republic issued a stamp "95th anniversary of Donetsk regional museum of local history". The face value of 18 Russian rubles, equal to rate of domestic letter with weight up to 20gr. 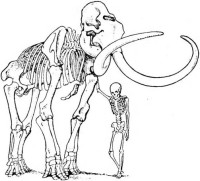 According to the official press release, the stamp shows the front of the Museum building and a sketch of a mammoth from the Museum’s collection.
The image of the mammoth is after a painting by the famous Soviet artist, A.P. Bystrov, who published it in a book “The Past, Present, Future of Man” in 1957.


The Donetsk People's Republic is a self-declared people's republic and proto-state in the Donetsk Oblast of Ukraine and is recognized only by similar self declared South Ossetia and Luhansk People's Republic (LPR).
Defacto DPR is fully controlled by Russia, who supports it militarily and financially. Russian rubles are used as the official currency of the territory.
Ukraine is at war with the DPR and LPR, these republics designated by Ukraine as terrorist organizations. Please think twice if you like to support authority of this territory by buying this stamp.


Notes:
[LN1] In 2019 local post company "Post Modern" who operate in Saxony (Sachsen) region of Germany, issued new definitive stamps with face values from 5 Euro-cent to 2.5 Euro that shows some major sightseeing sites of the region.
2.5 Euro is a price for Maximum letter, with weight between 501gr and 1kg.
One of these stamps shows a sauropod sculpture from the Dinosaur park at Bautzen.
The park contains over 200 life-size figures of dinosaurs and other prehistoric animals. Many of these animals are presented in scenes that help visitors envisage how these animals lived and fought for survival in primeval times.

[LN2] The Bison and Triceratops stamps from "125th anniversary of Natural History Museum of Muenster (NHMM)" set of 6, that issued in 2017, reprinted with new value of 70cent in November 2019.

Some personalized stamps directly related to Paleontology or Paleoanthropology: prehistoric animals, human ancestors and its fossils


Notes:
[SP1] On celebration of its 25th anniversary Mufomi Fossils and Minerals Museum of Elgoibar issued two personalized stamps.
One stamp shows a mineral, the other shows an ichthyosaur, one of the species of the genus Mixosaurus. For details please go here.
[SP2] It shows the two Neanderthal Man skeletons found in 1886 in the cave of Spy in Belgium.

[SP3] Issued by the Society of Friends of the Museum of Natural Sciences of the University of Zaragoza (SAMPUZ) and Philatelic Association Zaragozana (ASFIZA), with the purpose to promote fossils of Aragon in different locations of Spain and even abroad.

[SP4] The National Museum of Teheran issued a set with a number of personalized stamps showing artefacts of their huge collection in 2019. Three stamps are related to the stone age. The stamps themselves are ornamental tablets, with big personalized tabs attached to them.
For details please go here.


Notes:
[A1] The Natural History Museum (Museo de Historia Natural) in Lima, is Peru's most important museum of natural history.
Similar stamp issued in 2013 at 95th anniversary of the museum.
For details please go here. 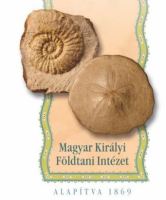 [A2] 150th anniversary of the Hungarian Royal Geological Institute.
The Hungarian Royal Geological Institute was the first state center for geological research in Hungary, whose foundation was approved by the Emperor Francis Joseph.
During the one hundred and fifty years of its existence, the institute has undergone numerous transformations and currently it operates under the name of the Mining and Geological Survey of Hungary.
The first day cover shows palaeontological finds (Ammonite and Sand Dollar) and the postmark has a stylized drawing of the building’s facade.

[A3] Mammoth and its bones shown on a cachet and postmarks of FDC with "Mezyn National Nature Park" stamps set.
For details please go here.

[A4] 250th anniversary of Alexander von Humbolt - great German naturalist.
Some collectors might consider this stamp as Charles Darwin made frequent reference to Humboldt's work in his Voyage of the Beagle, where Darwin described his own scientific exploration of the Americas. [R1]

[A5] Niah Caves, shown on the block, is the limestone cave and archeological site.
The cave is an important prehistorical site where human remains from 40,000 years ago have been found. For details please go here.

[A6] Painting from Lascaux Cave. The stamp was issued in sheets of 30 as well as a souvenir block.
For details please go here.

[A7] Milutin Milanković, who did important paleoclimate research, is shown on one of the stamps in this set.
For details please go here.

An illegal stamp is defined by the Universal Postal Union (UPU) as a stamp that carries the name of a legitimate country or territory but was not produced or printed by the postal administration of that country and is not valid for postage anywhere in the world.
Notes: 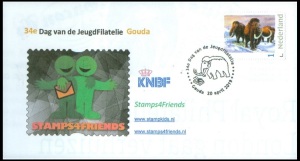 [C3] Personalized stamp with walking group of mammoths at domestic rate, postmark with one of them and commemorative cover issued for the "34thYouth Stamps Collectors Day".
The cover, unfortunately, has nothing in common with mammoths.

[C6] Over three dozen of commemorative postmarks were issued by USPS few days after release of Tyrannosaurus rex stamps set. Some postmarks look like child painting, comics or fairy tale. 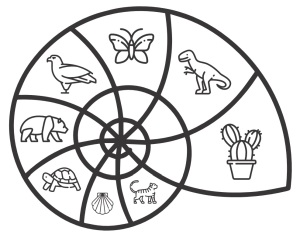 [CA1] Registered label with postmark of Czech's "Flora and Fauna" philatelic club. The postmark in the shape of an ammonite shows a stylized dinosaur, perhaps a T Rex, inside the chambers of the ammonite.
The text above the postmark: "Resumption of Fauna-Flora Expert Section at Union of Czech Philatelists." Similar postmarks issued in Prague, Plzen and Kladno cities.

[CA2] Postmark memorializes the 135 years since the designation of the Barrande Rocks in the region around Prague – named after Joachim Barrande. Barrendov is a suburb of Prague where these Devonian-aged rocks outcrop.

[PSO1] "130th anniversary of National Museum of Ethnography and Natural History". The postmarks shows the building of the museum.
One of the most famous artifacts of the museum is almost complete skeleton of Deinotherium giganteum, which is shown on stamp in 1995 and on the tab between two museum stamps in 2014.