Fossils, dinosaurs and other prehistoric animals, Charles Darwin on stamps and postmarks of Portugal


Contents: Portugal, officially the Portuguese Republic, is a country on the Iberian Peninsula, in Southwestern Europe.
It is the westernmost country of mainland Europe. To the west and south it is bordered by the Atlantic Ocean and to the east and north by Spain.
The republic also includes the Atlantic archipelagos of the Azores and Madeira, both autonomous regions with their own regional governments. The territory of modern Portugal has been continuously settled, invaded and fought over since prehistoric times.
Following its heyday as a global maritime power during the 15th and 16th centuries, Portugal lost much of its wealth and status with the destruction of Lisbon in a 1755 earthquake, occupation during the Napoleonic Wars, and the independence of its wealthiest colony of Brazil in 1822. A 1910 revolution deposed the monarchy; for most of the next six decades, repressive governments ran the country. In 1974, a left-wing military coup installed broad democratic reforms. The following year, Portugal granted independence to all of its African colonies. Portugal is a founding member of NATO and entered the EC (now the EU) in 1986. [R1]

The early issues from 1853 had the monarch's head, white and featureless, embossed on a coloured background. The most valuable stamps from this period are Gibbons catalogue nos 8 and 9 from the 1853 issue: the 100 reis lilacs.
The first pictorial issue in 1894 commemorated the 500th anniversary of Henry the Navigator's birth.
[R2] 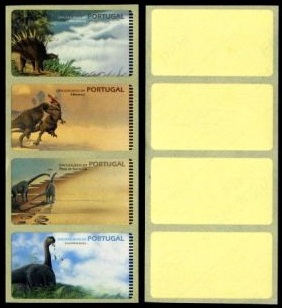 [1] In November 1999 Post Authority of Portugal introduce new set of machine (ATM) stamps with title "Dinosaurs of Portugal" (Dinossurios em Portugal).
Four different stamp templates were produced – each template depicts some dinosaurs and their footprints. Fossilized remains of all dinosaurs depicted on the stamps as well as their footprints are found in Portugal.


These dinosaur ATM stamps were issued with 7 predefined values from PTE (Portuguese Escudo) 50 to PTE 350 and were are sold in two different machines: Amiel and SMD that printed stamp values in different fonts.

Amiel stamps have big and bold font.
SMD stamps have small, regular, not bold, font.
In 2014, both Amiel and SMD machines were replaced by "NewVision E-post".

These dinosaur ATM stamps were on sale less than half a year, then machines were reprogrammed to print out stamps with values at both currencies: Escudos and Euro.
Stamp with face values in Euro currency only were issued for a short time between January and March of 2002 and are very difficult to find.

[2] On March 1st 2002, Post Administration of Portugal replaced dinosaur labels at ATM machines with self-adhesive labels with symbols of new European currency ("Símbolo do Euro") - EURO.
However, some rolls with dinosaur stamps were left in some ATM machines much longer and were issued even in the year 2003.
Note: stamps with face values of 2003 are not listed in major stamp catalogs.

[3] On May 4 of 2015, Post Authority of Portugal introduced 3 new self-adhesive "Dinosaur" ATM stamps. Similar to stamps from 1999-2002 they are sold with predefined values. 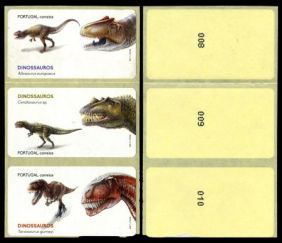 Distinguished from stamps from 1999-2002, the backsides of these stamps are numbered.


Since 2014, Portugal uses only one type of ATM machine - Newvision E-Post 2000.
Amiel and SMD machines were taken out of operation.

However, it was possible to obtain stamps with other values from the E-Post 2000M stamp machine.
These machines are fitted with a scale, and users can buy stamps according to weight, destination, and type of shipping required.

During September and October of the same year, the dinosaur rolls were replaced by rolls of "50 years of Portuguese National Vaccination Programme" design.
Due to this reason, there are not many circulated letters with these stamps in existence.

[4] On April 5th 2019, Post of Portugal issued a big set of 13 stamps dedicated to various museums in the country.
The stamp for the Geological museum of Lisbon shows a Jurassic Ammonite on the front.
Two more stamps of the set can be also considered by Paleontology stamps collectors: Natural History museum of Lisbon and Science Museum of the University of Coimbra.


Some personalized stamps of Portugal related to Paleontology: dinosaurs


Other stamps of Portugal to consider: fossil found places, pieces of fossils


Notes:
[A1] Fossil bivalve Jurassic in age depicted on one of the stamps "Protected Areas In Portugal", with landscape of Serras de Aire e Candeeiros Nature Park.

Serras de Aire e Candeeiros Nature Park covers a significant part of the Estremenho Limestone Massif (MCE). The dryness, heightened by the lack of surface watercourses, marks a landscape to which faults, escarpments and rocky outcrops add a robust and rugged outline.
Water runs through an intricate subterranean network. In turn, karst erosion produced characteristic formations – polje, limestone pavements, caves and pits, uvalas and dolines – in a rare profusion of forms.
The cavities are often fertile with speleothems such as stalactites and stalagmites. As for the fauna, more than a hundred species of birds nest here, and constitute the most sizeable group of vertebrates in the park. Some species are of national significance, such as the Eurasian eagle owl (Bubo bubo) and the red-billed chough (Pyrrhocorax pyrrhocorax) which nests in cavities.

The bivalves are a large class of molluscs, also known as pelecypods. They have a hard calcareous shell made of two parts or 'valves'. The soft parts are inside the shell. The shell is usually bilaterally symmetrical.
The species of the fossil bivalve on the stamp is unfortunately not recognizable.

Commemorative postmarks of Portugal related to Paleontology: fossils, dinosaurs and other prehistoric animals