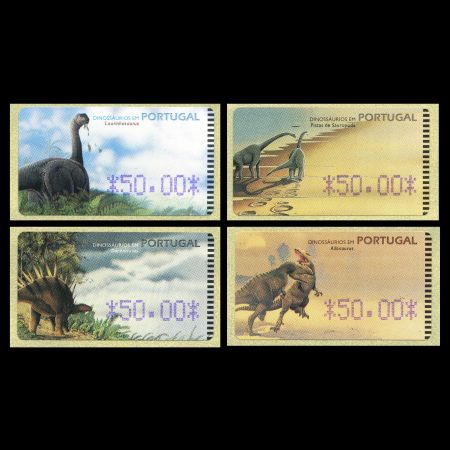 In November 1999 Post Authority of Portugal introduce new set of machine (ATM) stamps with title "Dinosaurs of Portugal" (Dinossurios em Portugal). Four different stamp-template depicting some dinosaurs and some of their footprints. Fossilized remains of all dinosaurs depicting on the stamps as well as their footprints are found in Portugal. This issue was design by Jos Projecto and Mariana Santos . The ATM's were printed by the Ovelar spanish firm that is known to print the first Epelsa ATM's for Spain . These dinosaur ATM stamps issued with 7 predefined values from PTE (Portuguese Escudo) 5o to PTE 350, see a table below for more details. Like in the other ATM issues it was possible to obtain some errors and varieties like double printings , missing numbers , and many others .

Note: Escudo 85 stamps was available at ATM machines, but not sold at philatelic desks of Portuguese Post, therefore its more difficult to find.
.
Here are some examples of ATM and SMD stamps. Stamps issued by Amiel machine made bold and large text. Stamps are issued by SMD machine had smaller and thin text on it.

These dinosaur ATM stamps were on sale less than half an year, till 22.03.2000. Since 21.02.2000 ATM machines print out stamps with values at both currencies: Escudos and Euro and later on between January and March of 2002 in Euro currency only.

The area of Lourinh is known by the Late Jurassic findings of dinosaurs and other fossils, and give the name for Lourinh Formation. Fossilized remains of all three dinosaurs depicting on the stamps are found there.

The museum has very complete exhibits of archaeology and ethnology, but the main focus of the museum is the palaeontology hall, which presents casts of famous dinosaurs, as well as fossils recovered from the Late Jurassic Lourinh Formation. Among these is the famous theropod nest found at the beach of Paimogo, which contains eggs with embryos inside, probably belonging to Lourinhanosaurus.

Some 150 million years ago, Western Portugal was a great coastal basin with plentiful supplies of water and vegetation that made it an ideal habitat for dinosaurs. At one site of particular interest, a group of female dinosaurs once gathered to lay their eggs in the calm waters of the lagoon. The youngest stood 6 metres tall, with the eldest some 8 metres. Each laid 20 eggs, measuring 12 cm each.

Today, visitors can see the fossilized remains of the eggs of 180 carnivorous dinosaurs making it the largest such nest in the world - and uniquely the eggs contained embryos. This is how Portugal stamped its mark on the map of palaeontology.

Acknowledgment: Many thanks to fellow stamp collector Vitor Vieira from Portugal, for his help to find some information about these stamps and who share scans of some stamps and covers.