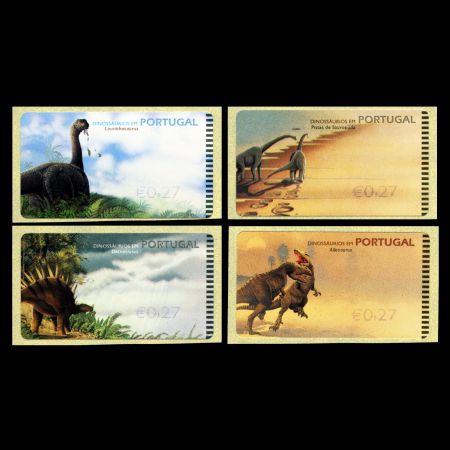 On January 1st of 2002 15 Europenean countries replace their local currency with a common one - EURO (€). This make more easier travel for citizens of these countries and make much more easier trade for corporations and private persons - all prices on every thing sales in those countries are written in EURO. The same changes are done for ATM stamps too. Only Euro (€) currency are written on ATM stamps of Portugal since 01.01.2002

In 2002 the dinosaur ATM stamps were on sale in four different machines. AMIEL, SMD and ePost NEWVISION 2000 ( Newvision machine introduced in December 2000) printed stamps with 7 predefined values as in the table below. Stamps issued by Amiel machine made bold and large text, some stamps are in black. Stamps of are issued by SMD machine had medium size text on it. Stamps of are issued by epost-Newvision machine had small size text on it. ePost NEWVISION M (Modular) machine, has more than 30 pre-programmed rates for various weight categories. Dinosaur stamps with ePost NEWVISION M values are very rare.

Notes: In 2002 some ATM machines used various ink colors, either blue or black (dinosaur stamps with text written in black color are very difficult to find), to print a text on stamps.

Here are some examples of the dinosaur stamps variations: