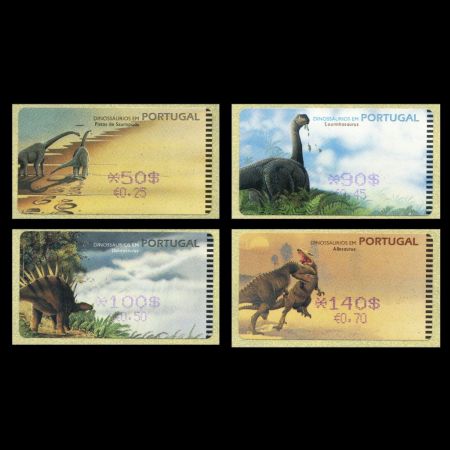 In 2000 Portugal as well as another 15 European countries start some preparation to use a common currency -EURO. As part of the preparations all prices on every thing are written in both local and EURO currencies till the EURO money replace local currencies in Jan. 2002. The same changes are done for the dinosaur ATM stamps too. First stamps with double currency issued on Feb. 21 at Amiel machines and on March 13 at SMD one.

Notes:
Similar to 1999, these stamps were on sale in two different ATM machine: AMIEL and SMD. The printing looks very similar in both machines , but the Euro symbol is different. The Euro symbol on the SMD stamps it is more round than on AMIEL stamps. Moreover, stamps issued by Amiel machine uses bold and larger text. (Compare to stamps from 1999, text on dinosaur ATM stamps of Amiel machine from 2000 is bit smaller). Stamps of are issued by SMD machine had smaller and thin text on it


Here are some examples:

Many thanks to fellow stamp collectors Vitor Vieira and José Lalanda Jorge from Portugal, for his help to find some information about these stamps and who share scans of some stamps and covers.