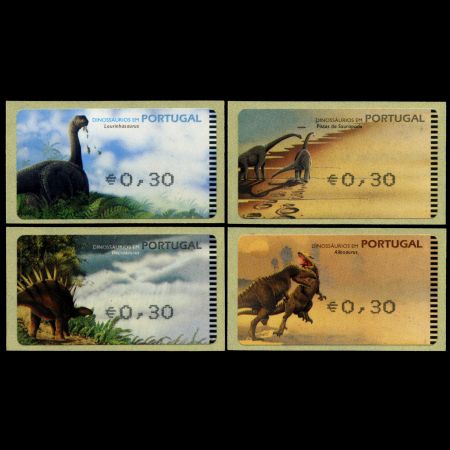 Om March 1st 2002 Post Administration of Portugal (CTT Correios de Portugal) replaced dinosaur labels at ATM machines by self adhesive labels with symbols of new European currency EURO. However, some roles with dinosaur stamps are left in some ATM machines much longer and was issued even in the year 2003. The stamps from 2003 distinguished from stamps of 2002 by face value of two stamps - domestic mail up to 20 gr., €0.30 instead €0.27 and letter to Spain up to 20gr., €0.55 instead €0.54. These stamps, are very rare and even not mentiioned in major stamps catalogues such as Michel or Scott, but described in national catalogue - Afinsa 2011 or later.

These stamps are printed with 7 predefined values:

Here are some examples of the dinosaur ATM stamps: