Contents:
Madagascar, officially the Republic of Madagascar, and previously known as the Malagasy Republic, is an island country in the Indian Ocean, off the coast of Southeast Africa.
The nation comprises the island of Madagascar (the fourth-largest island in the world), and numerous smaller peripheral islands.
Estimated population of the country is 28.5 million.
The Malagasy Republic was proclaimed on 14 October 1958, as an autonomous state within the French Community.
In 1975 the country was renamed the Democratic Republic of Madagascar.
Following the prehistoric breakup of the supercontinent Gondwana, Madagascar split from the Indian peninsula around 88 million years ago, allowing native plants and animals to evolve in relative isolation.
Consequently, Madagascar is a biodiversity hotspot; over 90% of its wildlife is found nowhere else on Earth. The island's diverse ecosystems and unique wildlife are threatened by the encroachment of the rapidly growing human population and other environmental threats. [R1]

The first stamps used in Madagascar were general issues for the French Colonies. In 1889 the French colonial general issues were overprinted with new face values. [R2]
The first stamps of the republic, after it proclaimed its independence from France, were issued in December 1958.
According to Michel-online catalog, the post of Madagascar issue up to 50 stamps a year. However, in some years amount of annual issued was double or even five times more.
1987-1990, 1994 when 100-170 stamps were issued a year.
1993, 1998-1999 were the busies time for Madagascar's Post when almost 250 stamps were issued per year.


Notes:
[1] Petrified wood shown on "Minerals", 1976 and "Mineral and Fossil", 1989 stamps.
Stamps from 1989 were issued in three formats - single in big sheet, individual Souvenir block, Souvenir block with the second stamp of the set.

A petrified wood forest in found near Madagascar’s northwestern coast. This petrified wood dates from the Triassic Period, 250 to 200 million years ago.
The wood is generally soft wood from the family Araucaria. Araucarians include the Gingko and the Monkey Puzzle tree.
Petrified wood from Madagascar is particularly beautiful after polishing – as the internal structure of the original tree can be clearly seen. Madagascar produces by far the largest commercial quantity of brown petrified wood sold on the world market. [R4] 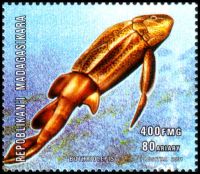 Prehistoric fish Bothriolepis is depicted on the second row of the mini-sheet
Bothriolepis (Greek; meaning "pitted scale" or "trench scale") is a widespread, abundant and diverse genus of antiarch placoderms, that was present during the Middle to Late Devonian period of the Paleozoic Era.
Historically, Bothriolepis resided in an array of paleo-environments spread across every continent including near shore marine and freshwater settings.
Most species of Bothriolepis were characterized as relatively small, benthic, freshwater detritivores (organisms that obtain nutrients by consuming decomposing plant/animal material), averaging around 30 centimetres in length. However, the largest species, Bothriolepis maxima, had a carapace about 100 centimetres in length.
Although expansive with over 70 species found worldwide, Bothriolepis is not unusually more diverse than most modern bottom dwelling species around today. [R3]

[4] Imperforated stamps of this set are offered on the Internet, but not listed in MICHEL and Scott. Very likely these are forgeries.