The French Territory of Afars and Issas (French: Territoire français des Afars et des Issas) was the name given to present-day Djibouti between 1967 and 1977, while it was still a colony of France.
In antiquity, the territory was part of the Land of Punt. Nearby Zeila (now in Somalia) was the seat of the medieval Adal and Ifat Sultanates. In the late 19th century, the colony of French Somaliland was established following treaties signed by the ruling Somali and Afar sultans with the French. The railroad from the city of Djibouti to Dire Dawa (and later Addis Ababa) allowed French Somaliland to quickly supersede Zeila as the port for southern Ethiopia and the Ogaden. It was subsequently renamed to the French Territory of the Afars and the Issas in 1967.
A decade later, the Djiboutian people voted for independence. This officially marked the establishment of the Republic of Djibouti, named after its capital city. [R1]

There are no stamps of Afars and Issas that directly feet to Paleontology thematic, but the following three issues might be of interest for some collectors. The first two sets are archaeology-themed and show some flint tools. The third set shows some modern shells. Stylized Trilobite and Ammonite are shown on stamp with face value of 10F (top-right stamp). [R2]

Some stamps of Afars and Issas to consider: flint tools, stylized fossils

Notes:
[1] Stylized ammonite and trilobite are depicting on stamp with face value of 10F 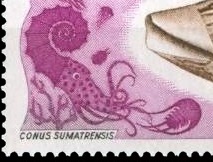 Official stamps of Djibouti related to Paleontology: fossils, dinosaurs and other prehistoric animals


Other stamps to consider: cave painting

Acknowledgements:
Many thanks to Dr. Peter Voice from Department of Geological and Environmental Sciences, Western Michigan University, for the draft page review.