Contents:
Belgium, officially the Kingdom of Belgium, is a sovereign state in Western Europe. It is a founding member of the European Union and hosts several of the EU's official seats and as well as the headquarters of many major international organizations such as NATO.
Belgium covers an area of 30,528 square kilometers and has a population of about 11 million people.
Straddling the cultural boundary between Germanic and Latin Europe, Belgium is home to two main linguistic groups: the Dutch-speaking, mostly Flemish community, which constitutes about 59% of the population, and the French-speaking, mostly Walloon population, which comprises 41% of all Belgians. Additionally, there is a small group of German-speakers who live in the East Cantons located around the High Fens area, and bordering Germany.
Belgium is a federal constitutional monarchy with a parliamentary system of governance. Its two largest regions are the Dutch-speaking region of Flanders in the north and the French-speaking southern region of Wallonia.
The Brussels-Capital Region, officially bilingual, is a mostly French-speaking enclave within the Flemish Region. A German-speaking Community exists in eastern Wallonia. Belgium's linguistic diversity and related political conflicts are reflected in its political history and complex system of government. [R1]

Distinguished from most of worldwide Post Authorities, the Post of Belgium issues three commemorative postmarks for every new stamp.
One postmark is used for the stamp presentation ceremony that takes place a day or two before the official release in the language of the town where the ceremony is held (either French or Dutch). The other two postmarks are used on the first day of issue, with one in French and the other in Dutch. For example dinosaur postmarks from 2015.   [R2]


Notes:
[1] Fossil of Iguanodon dinosaur is depicted on green stamp with face value of 1f.
[2] Pierre Teilhard de Chardin, a paleontologist who took part in the discovery of Peking Man, depicted on the third stamp in the second row from top. [R4]


Some personalized stamps of Belgium related to Paleontology: fossils


Notes:
[SP1] It shows the two Neanderthal skeletons found 1886 in the cave of Spy in Belgium


Notes:
[A1] On occasion of "the 150th Anniversary of the Institute of Science", post of Belgium issued a booklet with six insect stamps. The building of the museum and stylized Iguanodon depicting on the reverse side.
Thirty relatively complete iguanodon skeletons were discovered 322m underground in a coal mine in Bernissart, Belgium at the end of the 19th century. Since the bones were still in their original position, it was possible to present the skeletons in ‘lifelike’ poses.
One of the Iguanodons was depicting on stamp of Belgium 1966. [R5]

[A2] The Africa Museum is recognized worldwide for its rich, varied and scientifically valuable collections. The majority of its visitors are unaware of the size of this heritage as the permanent exhibition only has about 1% on display. The museum is known for its ethnographic objects, but its natural science collections, archives and photos are equally remarkable.
The vast majority of the objects come from the DR Congo and were collected during the colonial period. However, the museum's collections contain specimens from around the world, dating back 650 million years (for some of the fossils) to the present day.
The fossil collection has more than 18,000 specimens from Central Africa, collected through fieldwork or acquired through donations.
The collection is very diverse in terms of types of specimen (from the remains of large reptiles to microscopic skeletons of unicellular organisms) and in terms of age (approximately 650 million years to a few thousand years old).
Examples of large specimen series include: stromatolites from the Neoproterozoic (Lower Congo, Katanga, Kasaï) ; plant fossils from the Carboniferous-Permian (Katanga) ; fish fossils from the Jurassic-Cretaceous of the Congo Basin ; a diverse fauna from the Cretaceous-Cenozoic of the Atlantic coastal region (Lower Congo, Angola, Congo-Brazzaville, Gabon). [R6]

[A3] The Ishango bone shown at the bottom side of the stamp (white vertical lines) and correspondent post mark that used on FDC. It can be even better recognized on stamps from the bottom side of a sheet.
The Ishango bone was found in 1960 by Belgian Jean de Heinzelin de Braucourt while exploring what was then the Belgian Congo. It was discovered in the area of Ishango near the Semliki River. It is a bone tool and possible mathematical object, dated to the Upper Paleolithic era. It is a dark brown length of bone, the fibula of a baboon, with a sharp piece of quartz affixed to one end, perhaps for engraving. It is thought by some to be a tally stick, as it has a series of what has been interpreted as tally marks carved in three columns running the length of the tool, though it has also been suggested that the scratches might have been to create a better grip on the handle or for some other non-mathematical reason. It has also been argued that the marks on the object are non-random and that it was likely a kind of counting tool and used to perform simple mathematical procedures.  [R3]

[A4] The stamp with the face value of 6fr is dedicated to Neolithic mining and archaeological discoveries of Spiennes; around 4500 BC.
The hand ax shown on the top, following by the hoe.


Spiennes (Walloon: Spiene) is a town of Wallonia and a district of the municipality of Mons, located in the province of Hainaut, Belgium.
The locality is well known for its Neolithic flint mines, which are on the list of UNESCO World Heritage Sites since 2000.


The Neolithic flint mines of Spiennes are among the largest and earliest Neolithic flint mines which survive in north-western Europe.
The mines were active during the mid and late Neolithic between 4,300 and 2,200 BC.
The mines were discovered in 1843, the first excavations were undertaken by the mining engineer Alphonse Briart.
The Mines of Spiennes cover some 100 ha (250 acres), where thousands of shafts were bored by the Neolithic settlers. The flint layers are extracted by digging short galleries, from 2 to 5 metres long, which go off from the shaft that gives access to the mines.
The flint axes were used initially for forest clearance during the Neolithic period, and for shaping wood for structural applications, such as timber for huts and canoes.  [R7]


Other Commemorative postmarks and meter franking of Belgium to consider: primitive tools


Notes:
[COV1] Iguanodon is a symbol of Royal Belgian Institute of Natural Sciences (RBINS), fossil of this dinosaurs depicting on covers of the institute in the 1970’s, as well, as well as on stamp in 1966 and a booklet cover in 1996.
Reconstruction of the dinosaur depicted on their logo. [R5] Royal Belgian Institute of Natural Sciences is also very creative in production of their entrance tickets. Fossils and reconstruction of many dinosaurs and other prehistoric animals can be seen on it, as shown on some examples below. 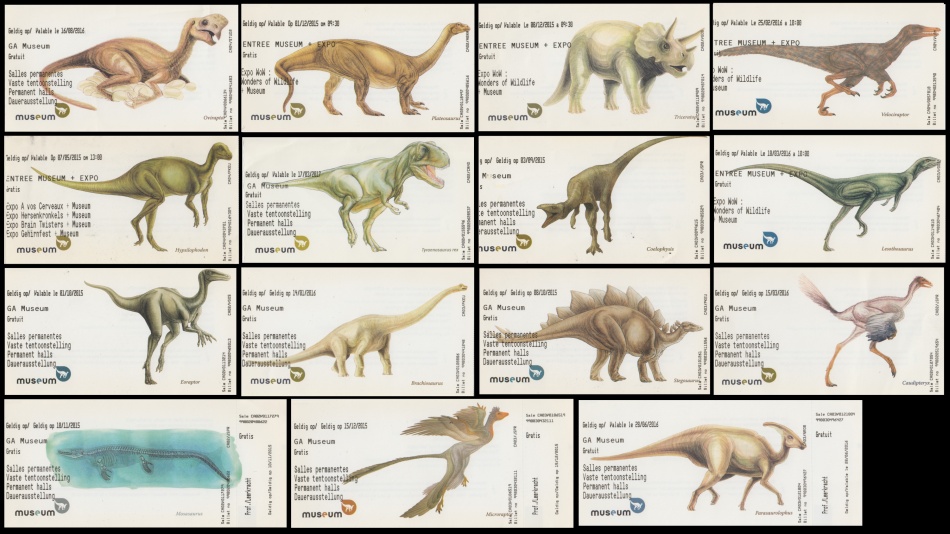