Italy, officially the Italian Republic is a unitary parliamentary republic in Europe. with population of 61 million. Located in the heart of the Mediterranean Sea, Italy shares open land borders with France, Switzerland, Austria, Slovenia, San Marino and Vatican City. Italy covers an area of 301,338 km2 and has a largely temperate seasonal climate or Mediterranean climate; due to its shape, it is often referred to in Italy as lo Stivale (the Boot). [R1]

As Italy was not unified until 1861, its early postal history is tied to the various kingdoms and smaller realms that ruled in the peninsula.
Following the unification of Italy during 1860 and 1861, stamps in use in each of the territories that joined Italy were withdrawn from circulation and replaced with the stamps of the Sardinian kingdom. The transition took place in Modena, Parma and Romagna on February 1, 1860, in Naples on September 15, 1862 (although local authorities had previously printed stamps depicting the coat of arms of Savoy), and in the Papal States - only in 1870. Matraire's stamps were reprinted several times, and those printed after 17 March 1861 are usually considered the first stamps of the Kingdom of Italy. [R2]

[2] One of the stamps shows petrified tree stumps from the fossilized forest of Dunarobba.
The Petrified Forest is located in the village of Dunarobba, 2.5 km from the walls of Avigliano. Considered one of the most unique paleontological sites in the world, the trees remaining in this petrified forest are more than two million years old. The fossilization phenomenon that can be observed at this site is different from all other petrified forests because the trunks here were able to maintain their original consistency and erect position. The particular characteristics of this paleontological site make it a unique natural monument of great scientific importance. [R10]


Notes:
[A1] Oetzi is a nickname given to the well-preserved natural mummy of a man, Homo sapiens sapiens, who lived around 3,300 BCE, (more precisely between 3359 and 3105 BCE), with a 66% chance that he died between 3239 and 3105 BCE. The mummy was found in September 1991 in the Oetztal Alps, hence the nickname "Oetzi", near the mountain of Similaun and Hauslabjoch on the border between Austria and Italy. He is Europe's oldest known natural human mummy, and has offered an unprecedented view of Chalcolithic Europeans. His body and belongings are displayed in the South Tyrol Museum of Archaeology in Bolzano, South Tyrol, Italy. [R6] 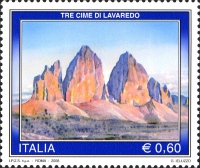 [A2] The Dolomites comprises a mountain range located in the northern Italian Alps.
A serial property of nine areas that present a diversity of spectacular landscapes of international significance for geomorphology marked by steeples, pinnacles and rock walls, the site also contains glacial landforms and karst systems.
It is characterized by dynamic processes with frequent landslides, floods and avalanches. The property also features one of the best examples of the preservation of Mesozoic carbonate platform systems, with fossil records. In August 2009, the Dolomites were declared a UNESCO World Heritage Site.

[C1] From the nineteen thirties until the fifties, the Sinclair Oil Company depicted dinosaurs on their meter franking, as well as regular advertisements to advertise their motor oil. They chose a dinosaur for a company logo as a symbol of the great length of time their oil spent in the ground.
The address of the company changed in 1957 – on the meter franking, the company replaced the street and house number with a post box number.:

[C2] Giuseppe Scarabelli (1820 - 1905) was a geologist, paleoethnologist and political Italian; he is remembered as the founder of Italian prehistoric archeology and was the first archaeologist to perform a stratigraphic excavation in Italy.
Scarabelli undertook systematic investigations concerning the position and age of the bones of some large mammals that inhabited the Imola Apennines in prehistoric times. Another innovative line of research, which gave him a leading role in the affirmation of geology and paleontology in Italy, was represented by the study of stone weapons collected there.
In 1850 he published the results of his research in the study Observations on ancient hard stone weapons that were collected in the Imola area, considered one of the first scientific contributions on Italian prehistory, with particular reference to objects of the Paleolithic and Neolithic. [R3]

[C3] Antonio Stoppani (1824 – 1891) was an Italian Catholic priest, patriot, geologist and palaeontologist. He was among the first to propose a geological epoch dominated by human activities that altered the shape of the land. He became professor of geology in the Royal Technical Institute of Milan and was distinguished for his research on the Triassic and Liassic formations of northern Italy.
Stoppani described several species of fossil molluscs while other fossil species have been named in his honour, including Fedaiella stoppanii Marini 1896 (a snail). Most of his collections are in the Museo di Storia Naturale, Milano, where he was responsible for constructing the building while he served as Director from 1882 to 1891. [R4]

[C4] Many stamps and postmarks issued by Postal Authorities around the world in 2009 to commemorate both the 200th Anniversary or bicentenary of the birth of the greatest naturalist in history, Charles Robert Darwin, and the 150th Anniversary of the publication of his most famous work On the Origin of Species by Means of Natural Selection.

Other commemorative postmarks of Italy to consider

[Co1] The Ciampate del Diavolo (Neapolitan: "Devil's Footprints" or "Devil's Trails") is a locality near the extinct Roccamonfina volcano in northern Campania, Italy. It is named after a set of fossilised hominid footprints preserved in pyroclastic flow deposits that have been dated to around 350,000 years ago. They have been attributed to bipedal hominids, possibly Homo heidelbergensis, which is known to have inhabited the region at the time. [R7]