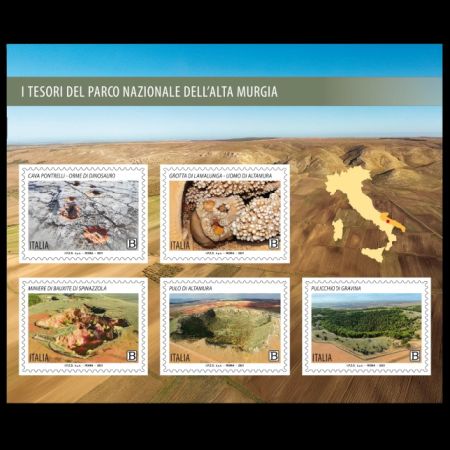 On May 24, 2021, the Post Authority of Italy issued a Mini-Sheet of 5 self-adhesive stamps - "Treasures of the Alta Murgia National Park". These stamps show some landscapes of the park. The location of the park on the map of Italy is shown on the margin.
One of these stamps shows some Dinosaurs footprints, another one shows the fossilized skull of the famous Altamura Man.

The Dinosaur Quarry of Altamura, also known as cava dei dinosauri or cava Pontrelli, is an area of scientific interest located in the countryside near the city of Altamura, Italy.


It was originally an abandoned quarry located in an area named Pontrelli located on "Via Santeramo", where a kind of carbonate rock known as calcare di Altamura used to be extracted. It originally belonged to the De Lucia family and, after a few changes of ownership, in 2016 it was expropriated. Now it belongs to the Municipality of Altamura due to the remarkable scientific relevance of the discovery.

The dinosaur tracks were accidentally discovered on May 10, 1999 by two marine geologists of the University of Ancona, Michele Claps and Massimo Sarti, while they were carrying out research on behalf of the company Tamoil.
Italian paleontologist and ichnologist Umberto Nicosia who studied the footprints short after their discovery named them Apulosauripus federicianus.

These footprints vary in size from 5-6 cm to 40-45 cm. The tracks were left behind by approximately 200 individual dinosaurs, representing most major groups of dinosaurs. Apulosauripus federicianus, for example, was left by an ornithopod. Ornithopods include the iguanodontids and hadrosaurs. In addition, footprints have been assigned to sauropods (the gigantic, long-necked dinosaurs), the ceratopsids (quadrupeds with large frills and horns on the skulls), and ankylosaurs (squat-bodied, extensively armored quadrupeds). Some tracks have even been assigned to the carnivorous theropods.

In many impressions it is even possible to see the folds of the skin. This exceptional state of preservation of the footprints is most likely due to the presence of a marshy ground with a muddy bottom, with carpets of algae that preserved the impression of the foot (holding the shape) and likely assisted the early cementation that preserved these tracks.
In fact, in numerous footprints the small wave of mud generated when the animal placed its paw on the ground is still visible.
The limestone rock, on which the entire city rests, belongs to the Altamura Limestone, which was deposited in the upper Cretaceous period, between 65 and 90 million years ago.
This sedimentary succession was part of the Apula Carbonate Platform, which constituted a promontory of the African continent comparable in climate and environment to the present Bahamas. During the emergence, the areas previously below sea level recorded the passage of dinosaurs who have imprinted their footprints on the soft sediment.
The footprints were then hardened by the phenomenon of early diagenesis and, with the return of the water, they were covered with carbonate rocks (formed from fragments of shells and microorganisms). The carbonate sediment filled in the footprints forming a cast of the footprint.


Altamura Man is a fossil of the genus Homo discovered in 1993 in a karst sinkhole in the Lamalunga Cave near the city of Altamura, Italy.


Altamura Man’s skull was remarkably well preserved. It is encased in a thick layer of calcite, where the calcite was precipitated as “cave popcorn”. The sample was left in situ in order to avoid damaging it. Research on the skull was done during the following 20 years based on documenting the specimen on-site. Without access to techniques available in the lab, the experts who studied the specimen were reluctant to agree on a conclusive age or even what species it belong to.

After a fragment of the right scapula (shoulder blade) was retrieved, it was taken into the lab where a variety of analyses were done on it. The calcite cements were age dated, suggesting an age between 128,000 and 187,000 years ago. DNA was sampled from the scapula and paleogenetic analyses was done – this work confirmed that the bone had neanderthal genetic markers. This work which was published in 2015 in the Journal of Human Evolution records what is still the oldest known sample of neanderthal DNA to have been successfully sequenced. The skull is also one of the most complete skulls known from the Paleolithic of Europe – as “even the bones inside the nose are still there”.

Altamura Man is one of the most complete Paleolithic skeletons ever to be discovered in Europe as "even the bones inside the nose are still there" and as of 2016 it represents the oldest sample of Neanderthal DNA to have been sequenced successfully.