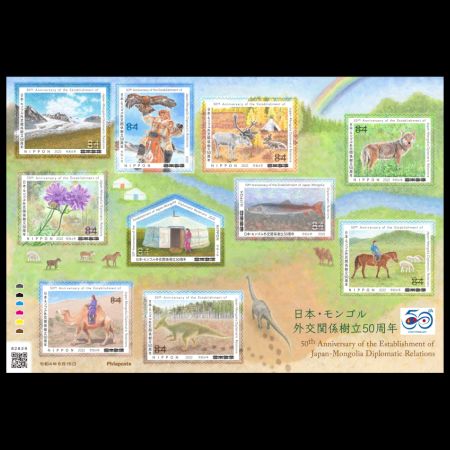 On June 16th 2022, Post Authority of Japan issued a Mini-Sheet with 10 self-adhesive stamps "50th anniversary of the establishment of Japan - Mongolia diplomatic relations".
The Mini-Sheet contain stamps of slightly different sizes with motifs of the scenery, culture, and creatures that are symbols of Mongolia.

Selvage: Sauropod dinosaur and its footprints. It depicts the world's largest ichnofossil (trace fossils) found in Mongolia and the sauropod dinosaurs that are believed to have made those footprints: described below. 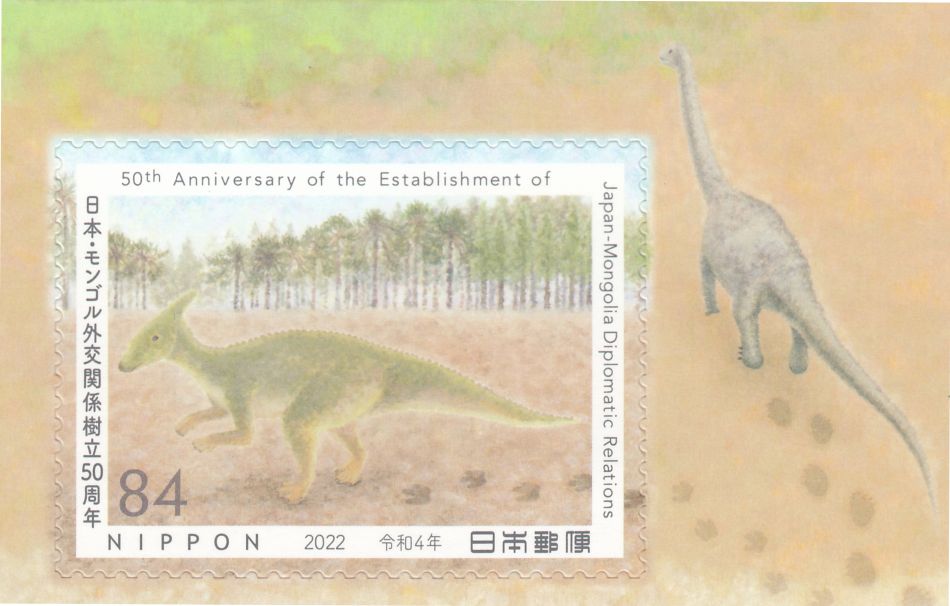 Saurolophus [R3]
Saurolophus is a genus of large hadrosaurid dinosaur from the Late Cretaceous period of Asia and North America, that lived approximately 70 million to 68 million years ago.
It is one of the few genera of dinosaurs known from multiple continents. Saurolophus is distinguished by a spike-like crest which projects up and back from the skull. The crest has been interpreted as a marker for sexual identification. Unlike lambeosaurines, the crests are made up completely of the nasal bone.
It was an herbivorous dinosaur which could move about either bipedally or quadrupedally. Its teeth were continually replaced and packed into dental batteries that contained hundreds of teeth.

The first species, Saurolophus osborni, was described by American paleontologist, Barnum Brown in 1912 from Canadian fossils. The estimated length of the adult dinosaur was about 8 meters long, including 1 meter long skull and has estimated weight of around 3 tonnes.
The fossil is on display in the American Museum of Natural History

The Mongolian species is larger the American one, had a longer skull and the front of the snout (the premaxillary bones) was more upwardly directed. The length of the dinosaur was about was about 13 meters long, including 1.2 meter long skull and has estimated weight of around 11 tonnes. Aside from size, the two species are virtually identical.

In 1998, some fossils and footprint of Saurolophus were discovered by Japanese-Mongolian paleontological expedition.

The Hayashibara Museum of Natural Sciences, from Okayama - Mongolian Paleontological Center Joint Paleontological Expedition performed its fieldwork in the Gobi desert during the period from the mid of June to beginning of September of 1998. The main goal of the expedition was observation and acquisition of geological, geographical and paleontological data for the reconstruction of the paleoenvironments of the several dinosaur localities in the central and western part of the Gobi Desert and search for fossils of prehistoric animals.
By the 2008 field season, the HMNS-MPC Expedition had discovered 18 new dinosaur tracksites and more than 20 000 dinosaur footprints from the Upper Cretaceous of Mongolia, including some footprints of Saurolophus.

Sauropod's footprint [R4]
According to the press release the dinosaur and its footprints on the selvage of the sheet, represents the world's largest ichnofossil (trace fossils) found in Mongolia and the Sauropod dinosaurs that are believed to have made those footprints.

The largest dinosaur's footprint (106cm by 77cm) discovered in Mongolia to date is the footprint discovered in August 2016, by the joint paleontological expedition of Okayama University of Japan and the Mongolian Academy of Sciences.
It was discovered in a geological layer formed 70 to 90 million years ago. Based on the size of the footprint, the researchers inferred that it belongs to Titanosaurus.


Titanosaur refers to a group of Sauropods (family level - Titanosauroidea) which includes the genus Titanosaurus amongst other genera (Patagotitan from Argentina for example).
These dinosaurs lived from the Late Jurassic Epoch (163.5 million to 145 million years ago) to the end of the Cretaceous Period (145 million to 66 million years ago). Titanosaurus, literally meaning 'titanic lizard', was named after the mythological Titans, first described by Richard Lydekker in 1877, based on fossil found in India. Titanosaur fossils have been found on all continents except Antarctica and include some 40 species. The group contains the largest terrestrial animals known. They are thought to have been more than 30 meters long and 20 meters tall. [R5]

The footprint, with three clear claw marks of the left hind limb, was discovered in Gobi Desert at "Khavirgiin Zoo" paleontological site in the Khanbogd district (soum), Umnugobi province (aimag), in southern Mongolia (marked by red on the map on the right side).


In June 2021, "Khavirgiin Zoo" paleontological site was added to the list of historical and cultural monuments under state protection.


“The footprint is one of the biggest known footprints in the world,” said Shinobu Ishigaki, a researcher at the Okayama University of Science in Japan and a member of the joint Mongolian-Japanese expedition to the Gobi.

During the next year, the expedition continued to dig at the same site and discovered another 3 large footprints. Two of these four casts are 106 cm in length and well preserved.
These footprints probably belong to to different individuals as their direction is not parallel, some are even perpendicular to others.
The step length is 220 cm. The estimated movement speed by the formula is 1.6 km/h to 1.9 km/h.
They were formed in red muddy fine-grained sandstone when the dinosaur walked in what was once soft ground.
What makes the discovery even more exciting is that the footprint is a natural cast, created by sand and silt that filled the dent left by creature’s left foot as it stomped the muddy ground. Previous dinosaur footprints have all been indentations, and therefore, not as well-defined. Hence, for the first time, researchers will be able to study the shape of the entire foot, including the three claws, and learn more about how the massive animals walked the earth.

The first dinosaur's footprints from Mongolia where discovered in 1957, when a researcher stumbled upon dozens of tracks in the cold, dry desert.
Since then many thousands of dinosaurs footprints were discovered in Mongolian desert.
Between 1995 and 2008, paleontologists found more than 20,000 preserved tracks belonging to a variety of dinosaur species.

Fossils of Sauropods from Mongolia have been known for more than 50 years before the discovery of these footprints.
In 1965, the Polish-Mongolian Palaeontological Expeditions discovered two sauropods from the Nemegt Formation of the Nemegt Basin, Mongolia.
One specimen, a nicely preserved, complete skull that in 1971 became the holotype of Nemegtosaurus mongoliensis, was found in Central Sayr at the Nemegt Locality.
The other was found at Altan Uul IV and is a nearly complete postcranial skeleton lacking only the skull and neck.
In 1977, this skeleton became the holotype of Opisthocoelicaudia skarzynskii.
Nemegtosaurus and Opisthocoelicaudia were initially assigned to diﬀerent sauropod higher taxa, Dicraeosaurinae and Camarasauridae respectively.
However, since the late 1990s, both genera have been recognized as members of the Titanosauria.


Notes:
[1] Japanese Post Authority didn't produce any official FDC. The cover above was canceled by of one of two commemorative postmarks associated with the stamps set, then posted to Germany on the First Day of the Stamp Issue.