Contents:
Austria officially the Republic of Austria (German: Republik Österreich), is a federal republic and a landlocked country of over 8.5 million people in Central Europe. It is bordered by the Czech Republic and Germany to the north, Hungary and Slovakia to the east, Slovenia and Italy to the south, and Switzerland and Liechtenstein to the west. The territory of Austria covers 83,879 square kilometres . Austria's terrain is highly mountainous, lying within the Alps. The majority of the population speak local Bavarian dialects of German as their native language, and Austrian German in its standard form is the country's official language. Other local official languages are Hungarian, Burgenland Croatian, and Slovene. Austria, with its well-developed market economy, skilled labor force, and high standard of living, is closely tied to other EU economies, especially Germany's. [R1]

Since 1946, the standard set of stamp-related philatelic products issued by the Austrian Post include stamps, an information page or brochure, FDC, but also a Black Print. The information page or brochure includes a brief description of the issue and some technical details. The Black Print is an ungummed, imperforate proof printed in black from the original printing plates. Black prints are distributed by the Austrian Post, but are not valid postage. Limited numbers (about 500) of these philatelic souvenirs are printed.


Notes:
[1] Eduard Suess (1831-1914) - geologist who "discovered" prehistoric Gondwana continent. He proposed the land bridge model for the distribution of fossil organisms.
He suggested that Gondwana was a supercontinent where land bridges had risen up out of the oceans to connect the modern continents together – so the animals could just walk across the bridge.
(He was influenced by the Bering Sea Land bridge between Eurasia and North America that had been described by that point).
He thought the continents were fixed in place – so the bridges had to pop up and then sink back down later on – but had no mechanism to explain how it worked nor had any idea what oceanic crust was made of. [R10]

It is less known, Eduard Suess discovered some dinosaur bones and some dinosaur species named after him.
In 1859, a young professor Eduard Suess (appointed professor of paleontology at the University of Vienna in 1856) and his student Ferdinand Stoliczka, who became a prominent geologist and paleontologist later on, came to explore the "Gute Hoffnung" mine at Muthmannsdorf in Austria.

The team discovered a thin marl layer, intersected by an obliquely sloping mine shaft. The marl was a freshwater deposit, now considered part of the Grünbach Formation.


The Grünbach Formation is an Austrian geological formation that dates to the lower Campanian age of the Late Cretaceous. It forms part of the Gosau Group, and represents a marine regression event, representing a coastal/brackish environment, being underlain by the marine carbonate Maiersdorf Formation and overlain by the deep marine siliciclastic Piesting Formation. [R15]

Suess and Stoliczka subsequently uncovered numerous bones of several species, such as Megalosaurus, a turtles, crocodiles, dinosaurs and a pterosaur.
All these fossils were stored in the museum of the University of Vienna but received little attention until 1870, when Austrian paleontologist Emanuel Bunzel came to study them.

Bunzel published result of his study in the following year in monograph "Die Reptilfauna der Gosauformation in der Neuen Welt bei Wiener Neustadt".
The English translation of the title is "The reptile fauna of the Gosau Formation in the New World near Wiener Neustadt".

One of the prehistoric animals described by Bunzel is a new genus and species of dinosaur Struthiosaurus austriacus.


Struthiosaurus is one of the smallest known and most basal genera of nodosaurid dinosaurs, with estimated length of 2.2 meters only. The dinosaur lived in the Late Cretaceous period (Santonian-Maastrichtian) on the territory of Austria, Romania, France and Hungary. [R13]


Mochlodon is a genus of iguanodontian ornithopod dinosaurs (Rhabdodontidae) who lived during the Late Cretaceous (85-80 million years ago) on the territory of Austria and Hungary. [R14]

In the summary of his monograph (page 17) Bunzel wrote: "Of the great interest is therefore not only the occurrence of such diverse forms in a single locality, but also the fact that these dinosaur remains are the first to be found in the Austrian empire and even in all of Europe in such Late Cretaceous strata."


Notes:
[A1] Alfred Wegener - German polar researcher, geophysicist, meteorologist and the originator of the theory of continental drift. [R8] 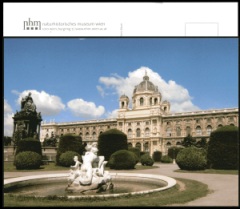 [A3] Legend has it that Klagenfurt was founded after a couple of brave men had slain the abominable "Lindwurm", a winged dragon in the moors adjoining the lake, the staple diet of which is said to have been virgins, but which did not spurn the fat bull on a chain that the men had mounted on a strong tower.
The feat is commemorated by a grandiose 9-ton Renaissance monument in the city centre. Although it represents a dragon, it can be regarded as the first palaeontological reconstruction. The head of the statue is modeled on the skull of Woolly Rhinoceros. In 1335 the cranium of a wooly rhinoceros from the ice-age was found in a gravel pit near Klagenfurt. It was instantly interpreted as the skull of a dragon or Lindwurm. This fossil, which is still on exhibit at the Landesmuseum für Kärnten, served as a model for the head of the Lindwurm. [R11]

[A4] Joint issue with Sloevenia.

Postojna Cave is a 24,340 m long karst cave system near Postojna, southwestern Slovenia. It is the second-longest cave system in the country (following the Migovec System) as well as one of its top tourism sites. Postojna Cave was carved by the Pivka River over millions of years.
Some fossils of Cave Lion depicted on Slovenian stamps in 2017 are found in the cave.
The cave was first described in the 17th century when Slovenia was part of Austro-Hungarian Empire.
In 1899 August 15th, Austria opened the first underground cave post office in the world, near Kongresna Dvorana 500m inside the cave from the entrance.
In 1927, another cave post office was opened – in the Concert Hall. This post office is in operation till today and is world’s only underground post office. [R16]

Personalized stamps of Austria related to Paleontology: dinosaurs and other prehistoric animals


Notes:
[P1] HMS Beagle was a Cherokee-class 10-gun brig-sloop of the Royal Navy, one of more than 100 ships of this class. On the second voyage a young naturalist named Charles Darwin was on board; the pivotal role this round the world voyage played in forming his scientific theories made the HMS Beagle one of the most famous ships in history. Darwin had kept a diary of his experiences, and rewrote this as the book titled Journal and Remarks, published in 1839 as the third volume of the official account of the expedition. This travelogue and scientific journal was widely popular, and was reprinted many times with various titles, becoming known as The Voyage of the Beagle. This diary is where Darwin drew most of the ideas for his publications. Darwin attributes his first real training in natural history to his voyage on the Beagle. [R12]

Legend is here
Notes:
[C1] Paleolithic hunters lived in the Stillfried area about 25,000 years ago. In a grassy landscape with few bushes and trees they hunted mammoth, rhinoceros, wild horse, reindeer, ice fox and mountain hare. Many remains of prehistoric animals and stone edge tools found in Stillfried can be seen in the local museum. [R3]

[C3] The oldest fossil in the Krahuletz Museum date back to the Permian age, 300 million years ago, and were found in Kamptal.
Fossil animals such as the Eggenburg crocodile or the sea cow Metaxytherium krahuletzi (depicting on the postmark) are among the highlights of their collection and established their worldwide fame.
The scientific name of our manatees is "Metaxytherium krahuletzi", they were named after Johann Krahuletz, who had found the first bones. They lived about 20 million years ago on the coast of the tropical Eggenburg Sea.
In the community sand pit of Kuehnring seven almost complete skeletons of manatees were discovered, which had probably died together during a storm surge and debris avalanche. [R4] 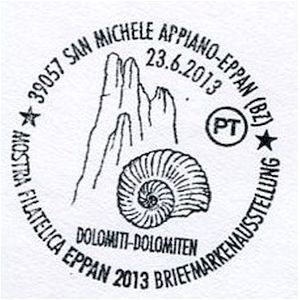 [C4] Franz Ritter von Hauer, or Franz von Hauer (1822-1899), was an Austrian geologist and paleontologist. Among his special geological works are those on the Cephalopoda of the Triassic and Jurassic formations of Alpine regions (1855-1856). He recognized and discovered 89 species and established the Middle and Late Triassic stratigraphical units of deep shelf environments. [R5]

[C6] In the 1960 a tusk of a Gomphotherium angustidens was found in a pit near the town of Mettmach in Austria. They put this prehistoric elephant on their coat of arms. [R6]

[C7] The animal on the coat of arms looks like a modern a elephant and it is very hard to recognize it as Gomphotherium. Gomphotherium is an extinct genus of proboscids (elephant) from the Neogene and early Pleistocene of Eurasia, Africa, and North America.
It had four tusks, two on the upper jaw and two on the elongated lower jaw. The lower tusks are parallel and shaped like a shovel and were probably used for digging up food from mud. Unlike modern elephants, the upper tusks were covered by a layer of enamel. Compared to elephants, the skull was more elongated and low, indicating that the animal had a short trunk. These animals probably lived in swamps or near lakes, using their tusks to dig or scrape up aquatic vegetation. [R7]


Other Commemorative postmarks and meter franking of Austria to consider