Austria 2009 "200th anniversary of the birth of Charles Darwin" 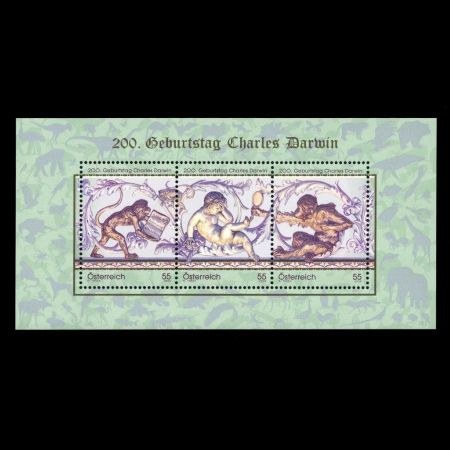 As the founder of modern evolutionary theory, Charles Darwin (1809-1882) is without doubt one of the most important scientists of all times. His work had a fundamental influence on biology and geology 8include paleontology), and was of major importance for subsequent ideas.
After an averagely successful school career and the abandonment of his university studies, the life of the young Charles Darwin was to change
fundamentally on December 27, 1831. It was on this day that he became a member of a voyage of discovery that he later referred to as “by far the most important event in my life”. On HMS Beagle under Captain Robert FitzRoy, Darwin spent five years travelling and exploring the world: the Cape Verde Islands, the Falkland Islands, the coast of South America, the Galapagos Islands, Patagonia, South Africa, Mauritius, etc. On his return he not only brought a Galapagos turtle with him (which incidentally only died in November 2006 at the age of 176), but a mass of drawings and findings that were to form the basis for his most important work, “The Origin of the Species". This book was published in 1859, and sold out almost immediately. Sceptics criticised his theory (and still do) as blasphemous, since, contrary to the Christian story of creation, Darwin argued that the various species were the consequence of adjustments to their habitat (“survival of the fittest”) and had thus developedin different directions. The scientific world, however, quickly acknowledged the sensational and well founded conclusions.

Charles Darwin, who later became a member of the Royal Society, published around 20 further works in the course of the years, ranging from studies on coral reefs, meat-eating plants and orchids to the origin of mankind, his no doubt most disputed scientific theory.
There is no doubt that his revolutionary discoveries (and his often caricatured ideas) give Charles Darwin a strong presence even today; they are still deeply rooted in public awareness. Thus in 1982, Darwin took 16th place in the list ofthe most influential persons in history, while in Great Britain, he was placed fourth of the "100 greatest Britons”. 200 years after Darwin's birth, the theory of evolution he founded and that has since been continuously further developed, forms the fundamental paradigm for biology. Thanks to it, all the biological subdisciplines such as zoology, botany, behavioural research, embryology and genetics are brought under one roof- according to the oft
quoted sentence “Nothing in biology makes sense except in the light of evolution”. This new commemorative block is a tribute to one of the greatest researchers of all times.