Contents:
Guinea, officially the Republic of Guinea (French: République de Guinée), is a country in West Africa.
Formerly known as French Guinea (French: Guinée française), the modern country is sometimes referred to as Guinea-Conakry in order to distinguish it from other country of the wider region with similar names, such as Guinea-Bissau and Equatorial Guinea. Guinea has a population of 10.5 million and an area of 245,860 km2.
Guinea's economy is largely dependent on agriculture and mineral production. It is the world's second largest producer of bauxite and has rich deposits of diamonds and gold. [R1]

The first stamps of independent Guinea were issued on 5 January 1959. Before that, Guinea used general French Colonies stamps, the stamps of Senegal and stamps of French West Africa.
During the first few years after gaining independence, the Post Authority of Guinea issued about 40 stamps a year with designs directly connected to the country: local fauna, famous personalities, landscapes etc.


Beginning in the 1980s and lasting until the end of the 1990s, Guinea authorized Swiss-based security printing company Impressor SA to produce and distribute stamps on the country’s behalf.
Even though the annual number of stamps produced remained in the reasonable range between 30 and 100 issues, many stamps exhibit general, popular topics such as mushrooms, butterflies, dinosaurs, American Presidents, etc. Many of these sets were issued in many varieties – single stamps, mini-sheets, souvenir sheets, etc.
Since 2002, Guinea has been a client of Stamperija. The number of stamp issues per year has dramatically increased – 500 stamps in 1998 and over a 1000 stamps in 2008!
Stamperija issues on behalf of Guinea stamps showing every possible popular topic. [R2]


Due to the facts above most stamps of Guinea should be avoided from serious collections and philatelic exhibition, therefore all all of them are marked with a gray background.


Notes:
[1] Within 1991 many stamps issued previously were reused: new values are surcharged. One of these stamps is Smilodon stamp from "Prehistoric Animals" set from 1987. 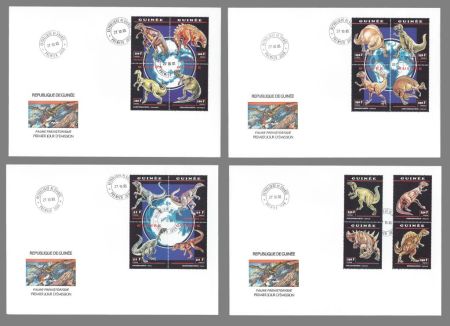 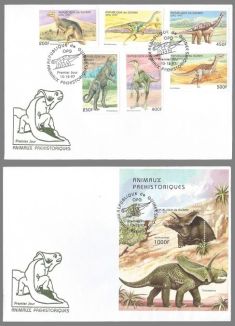 [2] The only set with commemorative postmark on FDC, other FDC are canceled by regular postmark with date of the "issue". Worth to mention, FDC are produced together with the stamp and usually appears on the market, even at Stamperija online shop, much after the date of a postmark used on FDC - actually FDCs of Guinea are not First Day Covers, but just commemorative covers. It is impossible to get really used FDC of the country.
Example of typical "FDC" of Guinea is on the right side. Even though special cover with correspondent illustration is used, it is cancelled with regular postmark.

[3] Some dinosaurs are depicted on the margins of "Minerals" Blocks.

[4] Within 2009 many dinosaur and prehistoric animal stamps issued previously were reused: new values and in most of the cases also a text "200e Anniversaire De Charles Darwin" (200 anniversary of Charles Darwin) are are surcharged and overprinted. 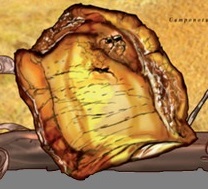 [6] Ant in Amber is shown on margin of "Ants" Mini-Sheet.

Ambulocetus natans shown on the margin of "Whales" Mini-Sheet.
Ambulocetus was an amphibious, early cetacean that had reduced limbs that could support it on land and large feet used for paddling in water. It lacked the tail fluke, present in later early whales, and had a pelvis attached to the spine, in contrast to later whales and hence, it could walk as well as swim. Along with other members of Ambulocetidae, it is a transitional fossil that shows how whales evolved from land-living mammals. It is also named the walking whale because of this.

[7] Latimeria (Coelacanth), "living fossil" fish is shown on the margin of a block belongs to "Fishes of the World" set.
Until 1938 Latimeria was known to scientist from fossil record only. Stamps of South Africa issued in 1989 are dedicated to the discovery. Since than several species are found off the coasts of South Africa, Comoros Islands (many stamps dedicated to Latimeria are issued by the country. "Searching for African Coelacanths" exhibit of Susan Bahnick Jones explain the story of the "living fossil" discovery.

[9] "Prehistoric and Present Marine Animals" set contain four Mini-Sheets, each one shows many present and one prehistoric marine animal: skull of some seal, perhaps fossil of prehistoric specie, on the margin, Trilobite, Liopleurodon ferox (carnivorous marine reptile belonging to the Pliosauroidea, a clade of short-necked plesiosaurs) on stamp and margin, Archelon ischyros (prehistoric giant sea turtle) on stamp and margin.

[10] Charles Darwin is on margin of a Block of "TRANSPORTS: Ernest Orlando Lawrence, Sonde Solar B" set

[11] Cave paintings of Lascaux cave and a caveman, most likely Cro-Magnon man (Homo sapiens), on margin of a Block of "XII Games Cancelled 1940"

[15] One of the stamps from set "Stamp on stamp" shows a stamp of Vietnam 1991 with Deinotherium giganteum on it.

Moreover "Homo naledi" on margin of the Souvenir Sheet was called "Homo erectus".

Later on, Stamperija reprinted the set with corrected title "135th memorial anniversary of Charles Darwin (1809–1882)" and corrected name of "Homo naledi" on the Souvenir Sheet margin, but made another mistake when by renaming "Homo erectus" on stamp to "Homo naledi". One issue fixed, another one was introduced.

[18] "Flying dinosaurs" is not a correct term to apply to the animals shown on these stamps. The animals pictured are pterosaurs. Pterosaurs are a group of flying reptiles in the Archosauria. Reptiles in the archosaurs include crocodiles, dinosaurs, and pterosaurs.

Some other stamps of Guinea to consider: contributors to Paleontology science