Contents:
Guinea-Bissau officially the Republic of Guinea-Bissau is a country in West Africa. It covers 36,125 square kilometres with an estimated population of 2 million.
In the 19th century, it was it was the colony of Portuguese Guinea. Upon independence, declared in 1973 and recognized in 1974, the name of its capital, Bissau, was added to the country's name to prevent confusion with Guinea (formerly French Guinea).
Guinea-Bissau has a history of political instability since independence. The country's per-capita gross domestic product is one of the lowest in the world. More than two-thirds of the population lives below the poverty line and depends mainly on agriculture and fishing. [R1]

The first stamps of independent Guinea-Bissau were issued in 1974. Before that, Guinea-Bissau used the stamps of Portuguese Guinea.
After gaining independence, the Post Authority of Guinea issued issued about 40 stamps a year with designs directly connected to the country: local fauna, famous personalities, landscapes etc.
Later on, the number of stamps produced per year increased rapidly, especially after 2001 when Guinea-Bissau became a client of Stamperija. Stamperija produces hundreds of stamps on every popular topic, such as dinosaurs for Guinea Bissau. Almost none of the stamps are related to the country.
For example: only in 2015 Stamperija produced over 370 Block and Mini-Sheets, that contain over 900 (!) stamps, on behalf of Guinea-Bissau. This is about the same number of stamps issued by Guinea-Bissau in the first 30 years since their gained an independence from Portugal in 1974. [R2]

Due to the facts above most stamps of Guinea-Bissau should be avoided from serious collections and philatelic exhibition, therefore all of them are marked with a gray background. 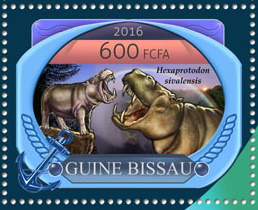 [N2] "Flying dinosaurs" is not a correct term to apply to the animals shown on these stamps.
The animals pictured are pterosaurs.
Pterosaurs are a group of flying reptiles in the Archosauria. Reptiles in the archosaurs include crocodiles, dinosaurs, and pterosaurs.

Some other stamps of Guinea Bissau: prehistoric animals on margins 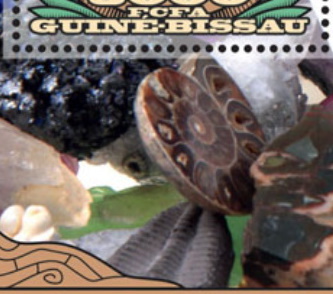 [O1] Ammonite and piece of Trilobite shown on margin of the Souvenir Sheet of the Mineral stamps, just below the stamp.

[O2] Georgius Agricola and Alexandre Brongniart shown among other scientists on the stamps.