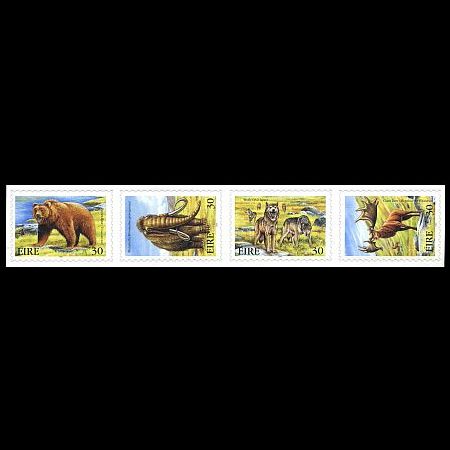 On October 11, 1999, Post Authority of Ireland issued set of four stamps "Extinct Irish Animals" that shows two extinct and two prehistoric animals: Mammoth and Giant Deer. These stamps issued in mint sheet of 16 and mini sheet of 4 stamps, as well as box of 100 self adhesive stamps, where all stamps are printed in a stripe.
Following on from 1998 years Endangered Animals issue, stamp artist, Finbarr O'Connor has this year produced an equally exciting and colorful series of stamps featuring four animals which are now extinct in Ireland - the Wolf, the Brown Bear, the Mammoth and the Giant Irish Deer.
Distinguished from mint stamps, self-adhesive once issued in stripe rather than two se-tenant pairs. Another difference, all self-adhesive stamps have the same face value of 30p.

References: Inside text of FDC