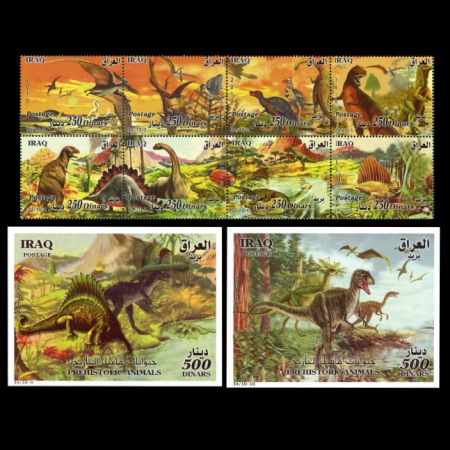 In the end of June 2010 Post Authority of Iraq issued set of 10 stamps depicting many prehistoric animals on it. There are a stripe of two rows with four stamps each and two big imperforated stamps in the set. Very colorfull stamps are printed in Lebanon, have very chaotic mix of animals who leaved at different locations and in different geologic times. Stamps cut (perforation) is strange, some animals are cut in the middle. Most of reconstruction of prehistoric animals depicting are quite outdated, based on old illustrations of famous paleo-artists as Zdenek Burian and Rudolpd Zallinger
Zdenek Michael František Burian (February 11, 1905, Koprivnice, Moravia - July 1, 1981 Prague) was a Czech painter and book illustrator whose work played a central role in the development of palaeontological reconstructions during a remarkable career spanning five decades. Originally recognised only in his native Czechoslovakia, Burian's fame later spread to an international audience, and a number of artists later attempted to emulate his style. He is regarded by many as the most influential palaeo-artist of the modern era.
Rudolph Franz Zallinger (November 12, 1919 - August 1, 1995) was an American-based artist notable for his mural The Age of Reptiles (1947) at Yale's Peabody Museum of Natural History. One row of these stamps is just a modifiication of the mural:

Many thanks to fellow stamp collector Jon Noad , from Calgary Canada, who share some scan FDCs from his collection