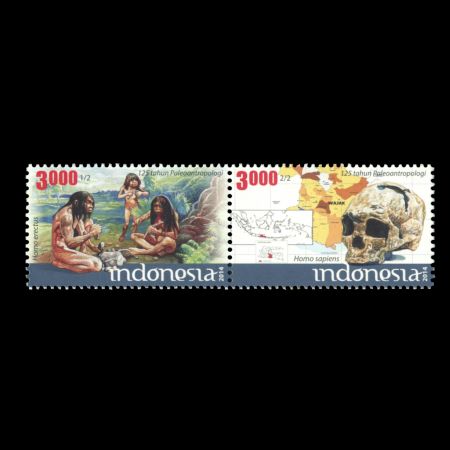 Indonesian Post planed to issue set of stamps in order to commemorate 125 anniversary Paleoanthropological Institute of Indonesia exactly on the same date as for 25 years, on August 31. However, for some reasons, the issue was delayed. These stamps arrived post office almost two weeks later, on September 12, 2014

Paleoanthropology (English: Palaeoanthropology; from Greek: παλαιός (palaeos) "old, ancient"), anthrōpos (ἄνθρωπος), "man", understood to mean humanity, and -logia (-λογία), "discourse" or "study"), which combines the disciplines of paleontology and physical anthropology, is the study of ancient humans as found in fossil hominid evidence such as petrifacted bones and footprints.