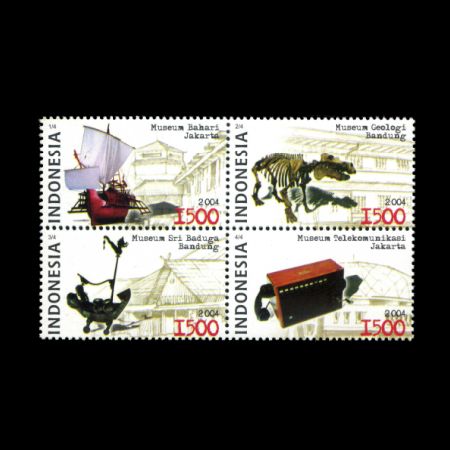 These stamps shows some exponats from various museums of Indonesia. One of them is the Bandung Geology museum.
The Bandung Geology museum is the biggest and most complete museum in Indonesia of its kind. This Museum is founded on 16 May 1928 as a geological center, by the Dutch. Renovated with relief fund of JICA (Japan International Cooperation Agency). The museum is divided into three exhibitions, Geology of Indonesia in the West wing, History of life in the East wing and Geology for human life on the top floor. Middle-Room Room Room Room Geology for Human Life
shows Fossils, stones, minerals and volcanoes. The museum has a large collection of fossils, of which about 6000 are on display and the other 250.000 are kept in a safe.Mammal (elephant, rhinoceros, buffalo, hippopotamus) fossils:
Tertiary Era (6, 5-1, 7 million year) and Quarter (1, 7 million year);
Corps Fossil (human being skull) - Homo erectus P. VIII ancient;
Snake ,fish fossil; Quarter area of Sangira, Trinil and of Mojokerto (East Java) -express human being evolution and history - ancient model in the form of and panel of maket.
Museum Geologi obtains various information related to problem of
geology. First human being skull fossil in world, lots of historical animal framework fossils. A long history of saving and manage galore geology items, like fossil, rock, mineral, collected during field activity in Indonesia since 1850.