More information about the UK are on Wikipedia WikiTravel

Philately:
he postal history of the United Kingdom is notable in at least two respects- first, for the introduction of postage stamps in 1840, and secondly for the establishment of an efficient postal system throughout the British Empire, laying the foundation of many national systems still in existence today.
Beginning in 1958, regional issues were introduced in the Channel Islands, the Isle of Man, Northern Ireland, Scotland, Wales. While these issues are only sold at post offices in the respective countries, the Northern Irish, Scottish and Welsh issues are valid throughout the United Kingdom. The Channel Islands (since 1969) and Isle of Man (since 1973) now issue their own stamps which are not valid anywhere else.

More information about postal history of UK on: Wikipedia

Click on image for detail description. Click on year number to see all Paleontology and Paleoanthropology related stamps issued in the year. 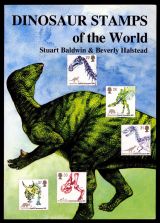 [1] In August 2008 Royal Mail issued a set of 5 stamps: "150th Anniversary of Dinosaurs' Identification by Sir Richard Owens" in order to commemorate great British paleontologist Sir Richard Owen who entered the world "Dinosaur" in English language in 1841.He coined the name for a lecture to the British Association Advancement of Science on Friday 30th July 1841. Dinosaur fossils had been disicovered many centuries earlier, but it took the genius of Richard, the best comparative anatomist of the time, to unlock some of the mysteries of these early finds, which consisted only of odd teeth and bones.
Unfortunately, Sir Rihard Owen not appeared on the stamps but on illustration of official FDC.
In the same year "Dinosaur stamps of the World" (ISBN 095080634X) book was issued in UK. The book tell a story about Dinosaurs and its discovery but ans shows all stamps, miniature and souvenir sheets issued to date. In 1991 it was still possible to include it all in relative small book of 128 pages.

[2] The achievements of Britain's greatest scientists are being commemorated by a set of stamps issues in August 1999. Isaac Newton, Michael Faraday, Charles Darwin and the biologists Crick and Watson are the inspiration for the Scientists' Tale collection part of the Royal Mail's Millennium Collection marking 1,000 years of British achievements.
The 26p First Class stamp, "Darwin's theory", was designed by the wildlife artist Ray Harris Ching. "Darwin's finch" stay next to a limestone fossil of Archaeopteryx.
Darwin's finches (also known as the Galápagos finches) are a group of about fifteen species of passerine birds.They are well known for their remarkable diversity in beak form and function. Two of them depicting on stamp of UK 1982: Cactus Ground Finch and Large Ground Finch

They were first collected by Charles Darwin on the Galápagos Islands during the second voyage of the Beagle. These small sparrow-like birds have a bewildering variety of beak shapes and sizes, and a
confusing similarity of plumage. The explanation for this variety may be that the Galapagos Islands were originally colonized by a finch species from nearby South America. As with the tortoises and the iguanas, island races or species eveloped in the isolated populations. In the finches things seem to have gone a stage further as the various island finches seem to have reinvaded each other's islands leading to competition and further modification to different feeding methods to allow co-existence.
Archaeopteryx is a genus of bird-like dinosaurs that is transitional between non-avian feathered dinosaurs and modern birds. Archaeopteryx lived in the Late Jurassic around 150 million years ago, in what is now southern Germany during a time when Europe was an archipelago of islands in a shallow warm tropical sea, much closer to the equator than it is now. The initial discovery, a single feather, was unearthed in 1860 or 1861 and described in 1861 by Hermann von Meyer, just two years after publication of " On the Origin of Species by Means of Natural Selection" by Charles Darwin (many stamps acroos the world issued in 2009 to commemorate 150 anniversary of the book) and was very strong argument to support his theory. The fossil shown on the stamps is. The fossil depicting on the stamp is well known the Berlin Specimen that was discovered in 1874 or 1875 on the Blumenberg near Eichstätt, Germany and is on show in Natural History Museum in Berlin. The fossil appeared on stamp of Germany(GDR) in 1973 for the first time and in 2011 on stamp of Germany(FDR) in 2011 again.

[3] Charles Darwin shown on stamp on the bottom-right corner.
This portrait of Charles Darwin, the great scientist and author of On the Origin of Species, is a copy by the artist of a portrait undertaken by John Collier for the Linnaean Society. Collier was himself the son-in-law of another prominent late Victorian scientist, Thomas Henry Huxley. The portrait was presented to the Gallery by Darwin's eldest son, William Erasmus Darwin, who wrote to Lionel Cust in 1896: 'The picture is a replica of the one in the rooms in the Linnaean Society and was made by Collier after the original. I took some trouble about it and as a likeness it is an improvement on the original.' It shows Darwin as an old man in the year before his death. According to Darwin's third son, Francis, 'The portrait represents him standing facing the observer in the loose cloak so familiar to those who knew him and with his slouch hat in his hand. Many of those who knew his face most intimately, think that Mr Collier's picture is the best of the portraits and in this judgement the sitter himself was inclined to agree.'

[4] Marie Charlotte Carmichael Stopes (15 October 1880 – 2 October 1958) was a British author, palaeobotanist and campaigner for eugenics and women's rights. She made significant contributions to plant palaeontology and coal classification, and was the first female academic on the faculty of the University of Manchester. With her second husband, Humphrey Verdon Roe, Stopes founded the first birth control clinic in Britain. Stopes edited the newsletter Birth Control News, which gave explicit practical advice.

[5] 2010was the year of the 350th anniversary of The Royal Society, the worlds oldest scientific academy in continuous existence. In celebration, Royal Mail has today released ten 1st class commemoratives featuring significant Royal Society figures whose portraits are paired with dramatic and colourful imagery representing their achievements. Two personalities anong ten depicting on these stamps are realted to subject of this website:

Evolution: Alfred Russel Wallace,
Wallace (1823 1913) was a British naturalist, explorer, geographer, anthropologist and biologist. He is best known for independently proposing a theory of natural selection which prompted the joint reading of his and Charles Darwins papers on evolution in 1858, and spurred Darwin to publish his own theory the following year. Wallace was one of the leading evolutionary thinkers of the 19th century and made a number of other contributions to the development of evolutionary theory besides being co-discoverer of natural selection. These included the concept of warning colouration in animals, and the Wallace effect, a hypothesis on how natural selection could contribute to speciation by encouraging the development of barriers against hybridization.

Earth Sciences: Sir Nicholas Shackleton,
ir Nicholas John Shackleton was a British geologist and climatologist who specialised in the Quaternary Period. He was the son of the distinguished field geologist Robert Millner Shackleton and great-nephew of the explorer Ernest Shackleton. In 1967 Cambridge awarded him a PhD degree, for his thesis entitled 'The Measurement of Paleotemperatures in the Quaternary Era'. Shackleton was a key figure in the field of palaeoceanography, publishing over two hundred scientific papers. He was a pioneer in the use of mass spectrometry to determine changes in climate as recorded in the oxygen isotope composition of calcareous microfossils. He also found evidence that the Earth's last magnetic field reversal was 780,000 years ago.

Following in the distinguished footsteps of Eminent Britons in 2009 and Britons of Distinction in 2012, the Royal Mail is delighted to introduce the Great Britons Special issue, celebrating the anniversaries of ten more people who not only achieved greatness in their lifetimes, but also left behind a lasting legacy.
One of the persons who is commemorated on these stamps is Mary Leakey (6 February 1913 9 December 1996) - an eminent archaeologist and anthropologist, Leakeys discoveries were so significant that they forced scientists to radically change many long-held views about human evolution.
She was the one who discovered the first fossilized Proconsul skull, an extinct ape now believed to be ancestral to humans. She also discovered the robust Zinjanthropus skull at Olduvai Gorge. For much of her career she worked together with her husband, Louis Leakey, in Olduvai Gorge, uncovering the tools and fossils of ancient hominines. She developed a system for classifying the stone tools found at Olduvai. She also discovered the Laetoli footprints. It was here, at the Laetoli site, that she discovered Hominin fossils that were more than 3.75 million-years-old. She also discovered fifteen new species of other animals, and one new genus.
In 1960 she became director of excavation at Olduvai and subsequently took it over, building her own staff. After the death of her husband, she became a leading palaeoanthropologist, helping to establish the Leakey tradition in the field.
Mary died on 9 December 1996 at the age of 83, a renowned paleoanthropologist, who had not only conducted significant research of her own, but had been invaluable to the research careers of her husband, Louis Leakey, and their sons, Richard, Philip, and Jonathan.