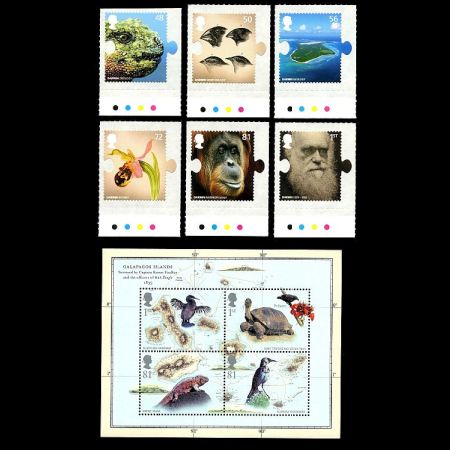 Ten colourful Philately celebrates the 200th anniversary of Charles Darwin's birth and the 150th anniversary of On the Origin of Species.
Julietta Edgar, head of special stamps, Royal Mail, said: "Charles Darwin's ideas triggered a revolution in the understanding of how species evolve. The brilliance of his thinking is symbolised in the unique design of the stamps the jigsaw shape suggests how Darwin was able to draw on his different areas of study to formulate groundbreaking new ideas."
Royal Mail also issued a separate set of tamper-proof stamps today, which have improved security features to stop users peeling used stamps from envelopes which have not been franked and reusing them.
Part of a sticky film covering the stamp will remain on the envelope and thwart fraudsters. The new stamps will also be printed on the same tamper-proof paper used for currency. They are called the Machin stamps, named in honour of the (late) artist Arnold Machin, who created the classic image of the Queen which features on British stamps and coins. 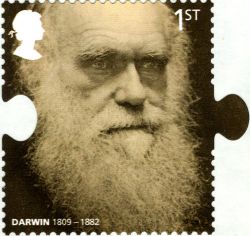 The Royal Mail's stamps commemorate Darwin and the areas of study which inspired his ideas on evolution: zoology, botany, geology, ornithology and anthropology. The six "jigsaw" shape stamps symbolise how his studies of different disciplines came together to form new ideas on evolution.

1st class shows a portrait of the man himself while the others show Darwin's areas of study that helped to contribute to his ideas on evolution: Zoology, Ornithology, Geology, Botany and Anthropology through a mixture of present day photography and relevant archive material from Darwin's time.
Born at the Mount, Shrewsbury on 12 February 1809, Darwin studied at both Edinburgh and Christ's College, Cambridge before in 1831, aged just 22, he embarked on a five year journey to south America, and beyond, aboard the HMS Beagle. He died on 19 April 1882 at Down House, Downe, Kent. More than two decades after his return he eventually published On the Origin of Species by Means of Natural Selection in 1859. Darwin wanted to unravel 'the mystery of mysteries - the first appearance of new beings on Earth', and his book immediately challenged the established beliefs concerning evolution that were commonly held at the time, triggering a scientific revolution that still causes debate today.

Royal Mail has also produced a special sheet of four stamps illustrating the unique wildlife of the Galpagos Islands that includes the Flightless Cormorant, Giant Tortoise, Floreana Mockingbird and Marine Iguana, and which builds up into a contemporary map of the Galpagos Islands with the key species Darwin studied in the 1830s during his voyage as Ship's Naturalist on the hydrographic survey ship HMS Beagle. The animals of these isolated islands and how they showed evidence of variation and evolution had a profound influence upon Darwin's theory of natural selection. The animals are shown against the background of the map produced on the mission by Captain Robert Fitzroy.