Fossils, dinosaurs and other prehistoric animals, paleontologists, Natural History Museums and fossil found places on stamps and postmarks of Argentina

Contents:
Argentina, officially the Argentine Republic, is a federal republic located in southeastern South America. Sharing the bulk of the Southern Cone with its neighbour Chile, it is bordered by Bolivia and Paraguay to the north; Brazil to the northeast; Uruguay and the South Atlantic Ocean to the east; Chile to the west and the Drake Passage to the south.
The country is the second-largest in Latin America, and the largest Spanish-speaking one. Argentina claims sovereignty over part of Antarctica, the Falkland Islands, South Georgia and the South Sandwich Islands. [R1]

Since the discovery of dinosaur remains in the Neuquen basin in 1882, Argentina has gained the title of Land of the Giants.
The tittle was reinforced by the discoveries of titanosaurs like Argentinosaurus, Dreadnoughtus, Notocolossus, Puertasaurus, and Patagotitan.
The study of this diverse group of sauropod dinosaurs embrace an extensive list of important contributions, which started with Richard Lydekker’s pioneering work on Patagonian dinosaurs. [R11]
Some of these giants can be seen on Argentinian stamps and postmarks.

Argentine postage stamps were first issued in 1858. [R2]
The first Paleontology related stamp issued almost a century later and shows most famous paleontologist of the country: Mr. Florentino Ameghino who formed one of the largest collections of fossils of the world at the time, which served him as the basis for numerous geological and paleontological studies.
The La Plata Museum is a Natural History Museum in La Plata, houses 3 million fossils and relics, building of the museum depicted on many stamps Argentina since 1933, these stamps should be considered by Paleophilatelic collectors for their collections.

Official stamps of Argentina that related to Paleontology: fossils, dinosaurs and other prehistoric animals, paleontologists


Notes:
[1] Florentino Ameghino (1854 -1911) was an Argentine naturalist, paleontologist, anthropologist and zoologist. He formed one of the largest collections of fossils of the world at the time, which served him as the basis fornumerous geological and paleontological studies.
He also investigated the possible presence of prehistoric man in the Pampas and made several controversial claims about human origins in South America.
In 1902 Florentine Ameghino became the first Argentine director of the “Bernardino Rivadavia" Argentine Natural Sciences Museum. The Museum (MACN — CONICET) is the oldest Natural History Museum in the Argentine Republic, which celebrated its 200th anniversary in 2012.
The paleontology section of the Museum is notable for its dinosaur collection that includes Carnotaurus, Eoraptor, Herrerasaurus and Patagosaurus as well as some a Cenozoic animals such as Glyptodon, Macrauchenia, Megatherium and Smilodon.

Florentino Ameghino s shown on the following Argentinian stamps and postmarks:
[2] One stamp of the set shows a landscape of the Monumento natural Bosques Petrificados (the Natural monument Petrified Forest).

This park is a protected area located in the northeast of the province of Santa Cruz, in the Argentinean Patagonia. It was created in 1952 with the purpose of preserving an area with a significant number of remarkably preserved petrified trees. The region that currently occupies the petrified forest is part of a geological formation whose antiquity corresponds to the upper Jurassic, approximately 150 million years ago. About 150 million years ago, during the late Jurassic period, the area occupied by this national park had a stable climate with abundant moisture. Dense forests with giant trees grew here, among which were Araucaria mirabilis, an ancient relative of modern species of Araucaria, a kind of evergreen conifer.
This changed at the start of the Cretaceous period, when volcanic eruptions, which coincided with the start of upthrusting of the Andes mountains, buried some of the Patagonian territory in ash and lava. Part of the forests covered by ash were subjected to the processes of petrification.
Some of the fossil trees are up to 30 m long and have a diameter of 2 meter. [R5] One of these trees depicting on the right side of the stamp (see on the right). 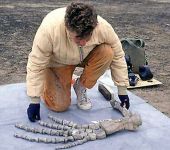 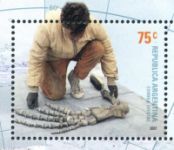 [3] The stamp at the top-right corner of the “Antarctic Institute” block shows a scientist with a fossil of a fin from a Plesiosaurs. A similar figure is drawn in the middle of the “Research Antarctica” block from 2014. Both issues are based on a famous photo that can be found in many articles in the internet.

Plesiosaurs lived for millions of years in the then-warm southern ocean surrounding Antarctica, with adults growing as large as 10 meter long. With diamond-shaped fins they could "fly" through the water much as penguins do now, as shown on Argentinian stamp in 2014. [R3]


Notes:
[O1] The Museum of La Plata is the Natural History Museum in La Plata, Argentina.
The museum, connected with the National University of La Plata, houses one of the most important paleontological and anthropological collections in South America.
The first collections were donated by the naturalist Francisco Pascasio Moreno, founder and first director of the Museum.
The current collection of the museum contains around 4 million items, mostly from Argentina and other South American countries. The permanent exhibits is organized in 20 rooms located over two floors. The exhibits display the entire natural history of the Earth from the formation of the universe and planet Earth through life development to the origin of the human being and its cultures. [R9]
Two Smilodons sculptures srand at the entrance of the museum.
The building of the Museum of La Plata shown on the following stamps of Argentina (the Smilodon statues can even be seen on some of the stamps!):


[O2a] Ischigualasto and Talampaya National Parks are on the list a heritage site by UNESCO for its paleontological and archeological values.
These two contiguous parks, Ischigualasto / Talampaya Natural Parks, extending over 275,300 ha in the desert region on the western border of the Sierra Pampeanas of central Argentina, contain the most complete continental fossil record known from the Triassic Period (245-208 million years ago).
The oldest dinosaur fossils, known to date, were discovered in the Upper Triassic Ischigualasto Formation. Thes fossils include several basal (primitive) dinosaurs, including Eoraptor (depicted on stamp of Argentina in 1998) and Herrerasaurus (depicted on stamp of South Korea in 2010). Six geological formations in the parks contain fossils of a wide range of ancestors of mammals, dinosaurs and plants revealing the evolution of vertebrates and the nature of paleo-environments in the Triassic Period. [R4]

[O3] University of La Plata holds one of the most important paleontological and anthropological collections in South America. [R6]
The University shown on the following stamps:
[O4] Juan Bautista Ambrosetti was an Argentine archaeologist and naturalist.
He was a pioneer in the study of national folklore and is considered the initiator of scientific archeology in Argentina. He founded and fully organized the Ethnographic Museum, found prehistoric cities such as La Paya, in Salta.

In 1890 he published "Observations on the Oligocene fossil reptiles of the Tertiary lands of the ancient Paraná" (original name: “Observaciones sobre los reptiles fósiles oligocenos de los terrenos terciarios antiguos del Paraná” ) in the bulletin of the National Academy of Sciences of Córdoba. In this article he described some fossils from collection of Entre Ríos Museum in Paraná City, such as prehistoric lizard Propodinema from late Miocene (9.0 - 6.8 million year ago) (nowadays Propodinema is a synonym of Tupinambis). Some prehistoric crocodiles of genus Oxysdonsaurus and Proalligator.
Ambrosetti published a second article a few years later in the bulletin of the Argentinian Geographic Institute. “Contributions to the study of Oligocene fluvial tortoises in the old tertiary land in the Paraná” (original name: “Contribución al estudio de las tortugas fluviales oligocenas de los terrenos terciarios antiguos del Paraná”). In this article he described some prehistoric tortoises of Platemys genus from collection of Parana Museum. [R8]

[O5] Francisco Pascasio Moreno (May 31, 1852 – November 22, 1919) was a prominent explorer and academic in Argentina and famous collector of fossils of Argentina.
Already at a young age, with help of his brother and support of his farther, he established "Moreno Museum". The museum was opened in house of his parents. Nowadays, many fossils of Moreno Museum can be seen in "the Museum of La Plata".
In 1880, Moreno went to France, where he spoke at a meeting of the Anthropology Society of Paris, discussing two prehistoric skulls he had unearthed in Río Negro territory. He believed one was from the Quaternary period, and the other had ritual deformation in a manner similar to the skulls of the Aymara people of the Andes and Altiplano. In 1888, he founded the La Plata Museum of Natural History (building of the museum can be seen on many Argentine stamps), the most important of its kind in South America, that houses 3 million fossils and relics. [R7]

[O6] Francisco Javier Muniz (21 December 1795 – 8 April 1871) was an Argentine colonel, legislator, medical doctor, fossil collector and amateur paleontologist.
Muniz worked as a physician at Lujan. Lujan was already a famous area due to the discovery of the immense ground sloth Megatherium in 1788. He developed a collection that he intended to be used to create a natural history museum. He donated his artifacts (some sources say he was forced to donate them) to Juan Manuel de Rosas, who was a politician, army officer and who ruled Buenos Aires Province and briefly the Argentine Confederation at this time.
Muniz stayed in contact with Charles Darwin, with whom he exchanged some letters and articles. It was Darwin who convinced Muniz in 1845, to send fossil of a sabertooth cat which Muniz described and named as Muni-felus bonaerensis, in Gaceta Mercantil (local newspaper) to Natural History Museum for investigation. Experts of the museum ascribed the fossil to Smilodon bonaerensis species. [R10]


Other postal stationery to consider: contributors to Paleontology and Paleoanthropology science


Postmarks of Argentina that related to Paleontology: dinosaurs and other prehistoric animals, their fossils, paleontologist, Charles Darwin


Acknowledgements:
Many thanks to