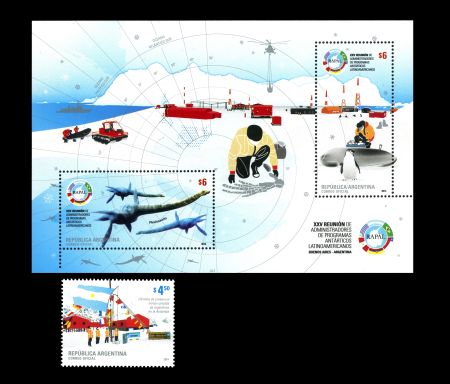 On 25th of March 2014, Post Authority of Argentina (Correo Oficial de la Republica Argentina SA) issued a aset of one stamp and one souvenir shet with two stamp in order to commemorate 110 years of uninterrupted presence of Argentines in the white continent.
Every year, the national administrators of the Antarctic programs from Brazil, Chile, Uruguay, Ecuador, Peru and Argentina get together at the RAPAL (Meeting of Administrators of Latin American Antarctic Programs). Thus, the Meeting stands as a Latin American forum for relevant issues concerning the Antarctic area, such as the environment, logistics, science, technology, education and culture. The first RAPAL was held in the Autonomous City of Buenos Aires in June 1990. In March 2014 the meeting will take place in this city again, which gives the event special relevance. One of the characteristics of these meetings is that they are spaces where the spirit of cooperation between the Latin American countries comes ﬁrst, and where the participants work with the clear aim of strengthening ties and planning joint actions concerning the Antarctic territory. The forum makes it possible to coordinate work on scientific, logistical and environmental issues with the aim of adapting and responding to the changing demands of the Antarctic work.

The Orcadas Base (the oldest scientific station of Argentina in Antarctica) opened on February 22nd 1904 and ever since then the Argentine flag has been flapping on Laurie Island. This year we celebrate 110 years of uninterrupted Argentine presence in the white continent. Base Orcadas is an Argentine scientific station in Antarctica, and the oldest of the stations in Antarctica still in operation. It is located on Laurie Island, one of the South Orkney Islands (Spanish: Islas Orcadas del Sur), at 4 meters above sea level and 170 meters from the coastline. Since 1904 Argentina has kept the base permanently populated, being one of six Argentine permanent bases in Argentina's claim to Antarctica, and the first permanently inhabited base in Antarctica. The base has 11 buildings and four main topics of research: continental glaciology, seismology, sea-ice-zone glaciology (since 1985) and meteorological observations (since 1903).
Orcadas was the only station on the islands for 40 years until the British established a small summer base, Cape Geddes Station in Laurie Island in 1946, replaced by Signy Research Station in Signy Island in 1947. It also had the first radiotelegraph in the continent in 1927. The 11 buildings of the station house up to 45 people during the summer, and an average of 14 during winter.

"Orcadas del Sud’, the first postal office in the Antarctic, was set up in 1904 under the charge of Hugo A. Acuﬁa. It remained open for just seven years. The postmark, which has been used since January 20nd 1904, indisputably established Argentina's presence in the Antarctic region. Some years later, in 1941, a Postal Office was created under the name of “Isles Orcadas del Sud“ (South Orkney Islands). It was inaugurated the following year and has been working ever since. In 1949 it became a radiopostal office.

In the background, an illustration of the Orcadas Base in Antarctica, the oldest Argentine scientiﬁc station, making reference to the 110th anniversary of uninterrupted Argentine presence in Antarctica. On the left side, base staff doing research. In the centre, a scientist working with fossils (the ﬁn of a Plesiosaurus). Bicontinental map of Antarctica. In metal ink, silhouettes of sea wolves and plesiosaurus (marine reptile).
Stamp on the bottom left side of the block shows complete reconstruction of a young plesiosaurus preserved in Antarctica for 70 million years. Illustration by the DNA (National Direction of Antarctica).
Another stamp on top-right side shows scientist collecting samples and analyzing the fauna of the region. In the foreground, Chinstrap Penguin (PygosceIis antarcticus).
In both stamps, logo of the RAPAL XXV (Meeting of Administrators of Latin
American Antarctic Programs), which will take place in Buenos Aires in
March 2014.

First fossil of plesiosaurus of Antarctica found by geologists of Argentine Antarctic Institute (AAI, IAA on Spanish ) during summer of 1975/76.
30 years later, during the Antarctic Campaign in Summer of 2005, complete fossil of a young plesiosaur, possibly killed and preserved by a volcanic eruption in antarctic territory 70 million years ago, found in the middle of hurricane winds and extremely low temperatures by group of scientists of the AAI.
The remains of the fossil represent one of the more complete plesiosaur skeletons ever found and undoubtedly the most of all the skeletons found in the Antarctic territory. The creature habited in Antarctic waters during a period in which the continents The scientific evidence shows that the long neck plesiosaurs became extinct over 65 millions years ago, along with the dinosaurs. However, reconstructions of these animals attained from the findings as the ones quoted here have allowed to know that, when alive, their fins as paddles had allowed them to "fly in the water" in a nowaday’s penguin-like movement.
The discovery was the result of an expedition of Argentine and U.S. after Lamb, southwest of Vega Island (northern Antarctic Peninsula) researchers and about 60 kilometers from the Argentina Marambio Base, said in a press conference the Argentine National Director of Antarctic Instutute Mariano Memolli
The expedition consisted of scientists from the School of Mines and Technology Museum of Geology South Dakota, Eastern Washington University, the Museo de la Plata and the Argentine Antarctic Institute.
According to Memolli, this group has been working since 1998 on Vega Island, where they found other fossils, and it was in 2005 when extracted remains discovered about 200 meters above sea level and transferred to the Museum of South Dakota for their preparation plesiosaur replica and study.
Scientists says "The fossil remains represent one of the most complete plesiosaur skeletons ever found and no doubt is the best articulated-that is, their bones together-all found in Antarctica".


Many thanks to fellow stamp collector Romina Aimar from Argentina , for her help to find some information about these stamps