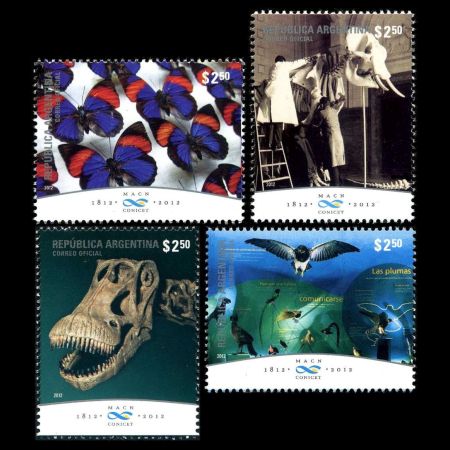 The “Bernardino Rivadavia" Argentine Natural Sciences Museum (MACN — CONICET) is the oldest in the Argentine Republic. It was founded only two years alter the May Revolution in 1810; thus its birth should be interpreted with regard to a national identity construction project as well as with the development of scientific history in the early Modern Age. The early years of the Museum coincide with a time when collectors gathered pieces of natural history and bright objects in what they called "curios cabinets”. These private collections originated herbaria and the zoological series that would later on be part of the museum's exhibits. During all those years, different personalities that lead the Museum gave their own particular style and vision to its management.
When Hermann Burmeister was named director in 1862 began a 30-year management that became the most significant in the Museum's history, due the magnitude of the implemented changes. During this stage the institution had a strictly scientific orientation and became an internationally renowned paleontological centre. In 1892 Burmeister was followed by Karl Berg, who had in mind a much more open museum. He therefore worked intensely to give the public greater access to all exhibits.
In 1902 palaeontologist Florentine Ameghino became the first Argentine director of the Museum. In those times material started to saturate the buildings capacity up to a point that it became necessary to close its doors for lack of space. The Museum reopened in 1916. Under the direction ol Martin Doallo-Jurado (1923-1946) the new building in Parque Centenario was built and the Museum moved in there. This innovative management centred on increasing collections, gave impulse to research and intense disclosure of knowledge.
In 1999 Dr. Edgardo Juan Romero assumed as director. In 2011 Doctor Pablo Tubaro its present director, started his management. New in 2012, the Museum's Bicentenary, the institution is working hard to achieve a new balance between research and museology. Collections are preserved and studied by specialized researchers and technicians. Research jobs are not only performed at the lab, but the researchers also hold study and material collection campaigns and advice other entities in Argentina.

The museum, the most important of its kind in Buenos Aires and second only to the La Plata Museum of Natural Sciences, nationwide. Besides the Natural Sciences Institute, the museum houses thirteen permanent exhibition halls, including an aquarium, a display with specimens collected from Argentina's numerous research stations in Antarctica, a geological collection centered around meteorites found in Argentina, a paleontology section notable for its carnotaurus, eoraptor, herrerasaurus and patagosaurus fossils, among others, and a cenozoic paleontology display featuring glyptodon, macrauchenia, megatherium and smilodon fossils. The height of some dinosaur fossils can be pretty impressive. The tallest dinosaur skeleton ever mounted was a Brachiosaurus that was over 43ft high. At that height it must have taken either a small home elevator or a great deal of scaffolding to assemble the very top of the skeleton.

Academics and the general public can also avail themselves of a science auditorium, an art gallery, library and a cafe. This museum is the best place to entertain travel weary kids. They can let their imagination run wild here.There is something about seeing an 18 metre reconstructed Patagosaurus that concentrates the mind and ignites the imagination. The museum is a two floored building in the centennial park which houses dozens of our Jurassic friends on display as well as an impressive collection of stuffed animals (everything from Kangaroos and seals to monkeys and sharks) and a geology room filled with all manner of rocks.

Acknowledge:
Many thanks to fellow stamp collector Jon Noad, from Calgary Canada, who shar some scan of the booklet with detailed description about these stamps