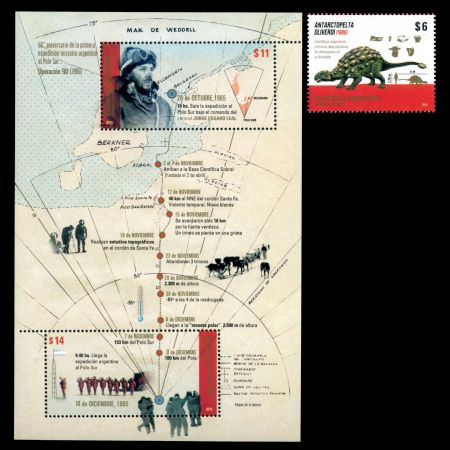 On March& 9, 2015 Argentinian Post released a set of 3 stamps: one Mini sheet with two stamps and one more single stamp. Distingushed from stamps from 2014, this time prehistoric animal is depicting on a single stamps rather than part of a mini-sheet.

The single stamp shows Antarctopelta oliverois dinosuars, found by Argentinian scientists in Argentina.
In 1986, an expedition from Argentine Antarctic Institute to James Ross island found remains of unknown dinosaur specie. It is a genus of Ankylosauria dinosaur represented by a single species, oliveroi, which lived at the end of the Cretaceous period (about 75 million years ago) in the Campanian, nowadays Antarctica. The Earth’s climate was then warmer, and even the Antarctica was already in the South Pole it was probable that it would have been without ice at least part of the year, partially covered with coniferous forests and deciduous trees with high seasonality, a similar environment to southern Patagonian Andes nowadays. The sediments where the remains were found belong to the Santa Marta Formation (along Kirpatrick formation, one of the only two geological formations in Antarctica where there are dinosaur remains).Teeth, parts of the lower jaw, fragments of a skull, vertebrae, limb and toe bones, posterior part of a tail and hip and numerous pieces of the shield of the Antarctopelta were found. The material was collected in a 6 m2 area during several seasons, and all of it is considered to be part of a single individual. Among Ankylosauria the Antarctopelta was medium sized, about 4 mts long. It was a solid herbivorous, quadruped, protected by armor plates inserted in the skin and with small but well ossified skull. From the found vertebrae, belonging to several parts of the tail, ossified tendons at the superior and inferior sides of that organ can be assumed. In Ankylosauria this tendons helped to keep straight the end of the tail, topped with a big bonny club. It is probable for the Antarctopelta to have had a similar club. These fossils are the only ones known of this Ankylosauria, which despite being the first dinosaur discovered in Antarctica was the second one to be formally named, next to the Crylophosaurus in 1994. Antarctopelta was named in 2006 by argentine paleonthologists Salgado and Gasparini. Its name refers to the antarctic continent and its armoured nature (pelta means “shield” in greek). The only named specie (oliveroi) honours argentine geologist Eduardo Olivero, who discovered it. The Antarctopelta oliveroi’s remains are on show in La Plata Natural Sciences Museum, ceded by the Antarctic National Management for its care and exposure. This museum, built in 1884, is one of the oldest Natural History Museums in South America. The collection of the Vertebrates Paleontological Division (DPV) was created in 1877, when Dr. Francisco Pascasio Moreno. who was a director of the museum later on, donated 15.000 pieces. Beside this original bone, several argentine and Antarctic dinosaur materials has been collected, acquired during more than a century and kept in the collection of the DVP. These contain thirteen types of materials and other important specimens of dinosaur, including ornithischians (ornithopods, ankylosaurs), saurischians (theropod, saurophodomorpha) and three ichnospecies.

Background of souvenir sheet, map indicating Antarctic section's zone where in 1965, Operation 90 (First Argentine Land Expedition to the South Pole) took place. On the map, the course (from Base Belgrano to South Pole) is marked and in orange, the expedition's places and signiﬁcant dates. Further, there is also a picture of the three researchers performing topographic studies, a thermometer indicating record temperature during that course and a picture of sledges and polar dogs.
In 1965. Argentine Army men decided to reach for the first time the South Pole, via land from the General Belgrano Base, located at 77° 46' South latitude and -38° 11‘ West longitude, on the Filchner Barrier. The expedition began on October 26"‘ going on a very difficult road. where the deep crevasses and sastrugis (furrows that the wind digs on the ice surface) thus forcing them to a slow, difficult and very risky march. At 83° South latitude they required a two-day pause to repair the sledges. That was the most difficult time of the trip, to which men referred as ‘Desolation camp‘. On December 10"‘ -after a 4 days march and doing the last trek without sleeping for 28 hours- the expeditionaries set foot on the Pole‘s hardened snow and on the last day of the year, December 31" 1965, after working their way for approximately 2900 km on the polar ice cap for 66 days, climbing to heights of over 3.000 metres at temperatures below -40°, the group returned to Belgrano base. The feat had been accomplished. More details about Operation 90 expedition is here.

Acknowledgement: Many thanks to fellow stamp collector Romina Aimar (Argentina) and her husband , for their help in translation of stamp booklet