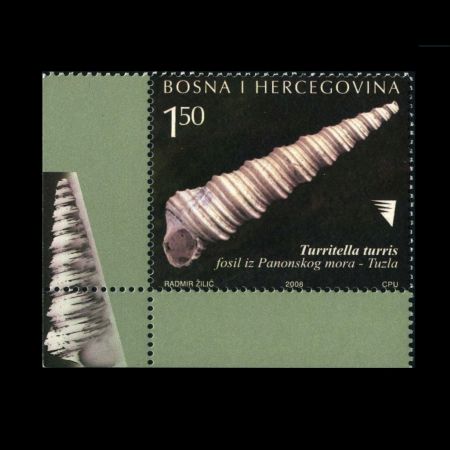 The Pannonian Sea is popular name for a part of the Parathetys which covered areas of today's Pannonian lowlands during Miocene era. This sea flooded the areas of Austria, Czech Republic, Slovakia, Hungary, Romania, Slovenia, Croatia, Serbia and Bosnia and Herzegovina. One of the most important sedimentary areas within Pannonian Sea was the Tuzla Basin. Here, sea sedimentation started before about 16 million years, and ended before 5 millions years. In these 11 millions years, sediments thick around 300 m were left in thr Tuzla area,including deposits of the rock salt and coal. Therefore Tuzla is a unique town in the world, considering that

in the geologically short time in the town area, in the Pannonian sea two minerals sediments were left, with the deposits that require rather different conditions to be created.

Rock salt had a decisive influence on the development of Tuzla. The name of this town changed as well as it rulers, but they always denoted the salt: Catron de Salenas, Ad Salinas, Salenas, Solina, Soli, Memlehatejn, Memleha-I-zir, Tuz....Tuzla.

Salt lake "Pannonica" (Latin Pannonicus - Pannonian) has been built in Tuzla in remembrance of the Pannonian Sea. Adding of cascades to the lake in underway, as well as building of the geological museum of Pannonian Sea. In the museum, fossils will be exhibited, beside other things, proving that the Pannonian Sea used to be in the Tuzla area. One of these fossils is Turritella turris Basterot represented on the postal stamp. This gastropod lived in the "sublithoral" in the depth of 70m. It is a "stenohalin" species that lived in the Pannonian Sea of Tuzla during Badenian time (16 to 13 milions years ago) when sea salinity was between 30 and 40 pairs mils. The fossil was named Turtnitella turis due to the fact that with its turbospiral morphology the fossil resembles the tower. (Lat. Turristower).

Dr. Sejfudin Vrabac, professor of geology of the Faculity of Mining, Geology and Civil Engineering of the Tuzla University.

Acknowledgement : Many thanks to fellow stamp collector Zeljko Vasilik from Croatia, for his help to find some information about these stamps.