Serbia officially the Republic of Serbia , is a sovereign state situated at the crossroads between Central and Southeast Europe, covering the southern part of the Pannonian Plain and the central Balkans. Serbia is landlocked and borders Hungary to the north; Romania and Bulgaria to the east; Macedonia to the south; and Croatia, Bosnia, and Montenegro to the west; it also claims a border with Albania through the disputed territory of Kosovo. The capital of Serbia, Belgrade, is one of the largest cities in Southeast Europe. As of a 2011 census, Serbia (excluding Kosovo) had a total population of 7.2 million.

The Kingdom of Serbs, Croats, and Slovenes was formed in 1918; its name was changed to Yugoslavia in 1929.
Following disastrous casualties in World War I, and the subsequent unification of the former Habsburg crownland of Vojvodina (and other lands) with Serbia, the country co-founded Yugoslavia with other South Slavic nations, which would exist in various political formations until the Yugoslav Wars of the 1990s.
During the breakup of Yugoslavia, Serbia formed a union with Montenegro, which was peacefully dissolved in 2006, restoring Serbia's independence as a sovereign state for the first time since 1918. [R1]

The Principality of Serbia (Kingdom in 1881) began to issue its own stamps in 1866. This continued until 1920, when its postal system was merged with the postal system of the former Austro-Hungarian territories with which it formed the Kingdom of Serbs, Croats and Slovenes. After the Germans established the Government of National Salvation in 1941 it issued its own stamps until 1944. Initially, Yugoslavian stamps were simply overprinted in German with the word Serbien. Later regular issues were inscribed both Serbien and Србија (Serbia). From 1944 onwards, Serbia was again part of Yugoslavia. Upon the dissolution of the union of Serbia and Montenegro in 2006, Serbia began issuing its own stamps once more. The Post of Serbia issues the country's stamps. [R2]


Notes:
[1] One of the stamps is dedicated to 200 anniversary of Charles Darwin

[2] PETAR STEVANOVIC (1914–1999), professor of geology at the University of Belgrade, member of the Serbian Academy of Sciences and Arts, president of the Serbian Geological Society, who also made some paleontologic researches.
Two fossilized shells of shellfish Lymnocardium sp. can be seen on the top-right side of the stamps. These shells are from fossil collection of Petar Stevanovic, which is on display at Geology Department of the Natural History Museum in Belgrade. 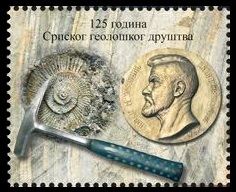 The stamp issued in Mini-Sheet of 8 with Ammonite fossil on the label in the middle.

[4] Mini-Sheet with 4 stamps of some famous scientists of Serbia. Vladimir D. Laskarev and Antan Koch were geologists and paleontologists.


Notes:
[O1]  Milutin Milankovitch (Milanković)
Milankovitch was a mathematician and climatologist, who showed how the Earth's surface temperature was sensitive to changes in the Earth's orbit (and tied it to several orbital parameters - the tilt of the Earth's axis, the eccentricity of the Earth's orbit, and the precession of the Earth's axis. Each of these three parameters change over set frequencies - and geologists have used his model to look at paleoclimate through time.
Milanković's works on astronomical explanations of ice ages, especially his curve of insolation for the past 130,000 years, received support from the climatologist Wladimir Köppen and from the geophysicist Alfred Wegener. Köppen noted the usefulness of Milanković's theory for paleoclimatological researchers. Milanković received a letter on 22 September 1922 from Köppen, who asked him to expand his studies from 130,000 years to 600,000 years. [R3]


Human evolution sequence is the famous "March of Progress" image, properly called "The Road to Homo Sapiens", that also appeared on many postal stamps are painted by famous paleo-artist Rudolph Zallinger who also painted huge mural "The Age of Reptiles" 34 m mural depicting the period of ancient history when reptiles were the dominant creatures on the earth, painted by Rudolph F. Zallinger. The fresco sits in the Yale Peabody Museum in New Haven, Connecticut and was completed in 1947 after five years of work. The piece of the mural is shown on US stamp from 1970