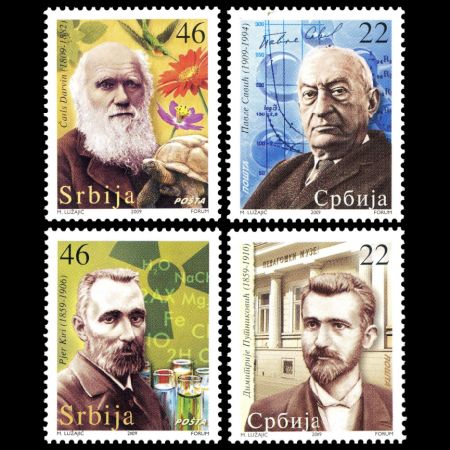 On June 22 2009, Post Authority of Serbia, Jugomarka, issued a set of 4 stamps "Science", depicting four scientists., with Charles Darwin among them 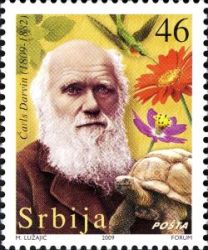 200th annivrsary of the birth of Charles Darwin (1809-1882)
The English naturalist, Charles Robert Darwin (February 12th, 1809 - April 19th, 1882.) is considered to be one of the greatest scientists of all times. In the book The Origin of Species, which was published 150 years ago (on November 24th, 1859.), Darwin didn't just give many convincing evidences about the possible mutations of biological species, but he also pointed at the mechanisms which enable those changes. Darwin has shown that the natural world of the organisms is submitted to the in uence of natural laws, which was the solution of the problem many past generations of scientists and philosophers have been unsuccessiuly occupied with. The value of a theory is measured according to its in uence on the development of various scientific disciplines, but only the greatest of them have an effect on the forming of the opinion and behaviour of the people who are just a little, or not at all, in touch with science. Although Darwin in The Origin of Species has never mentioned man, everybody understood implications of his idea that every species comes as a result of longlasting-evolution in which happens the transformation of one species into another and that is the reason why all living beings are close or distant relatives. Consequently, with man who is not the "purpose of the creation of the world" but just one of a million biological species, in the mind of the ordinary people ended the scientific revolution which began with the pointing of Nicolaus Copernicus (1543) at the unpleasant fact for many people that the Earth isn't the center of the Universe. 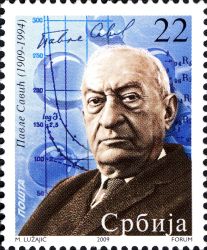 100 years since the birth of Paul Savic, (1909-1994.)
Pavle Savic (Thessaloniki, 10. January 1909 - Belgrade, 30. May 1994) physicist / chemist, professor at the University of Belgrade, director of the Institute of Nuclear Sciences "Boris Kidri" in Vinca, from its founding until 1960. Member of the Serbian Academy of Sciences from 1946. and president of SANU in the period from 1971 - 1981. From 1935 - 1939, at the Radium Institute in Paris, Pavle Savic was working with Irene Joliot Curie on the identification of elements which appear during the process of bombarding of uranium with neutrons. They discovered that one of the izolated products had not the expected characteristics of transuranic elements but those that belonged to rare earth. This discovery led directly to the discovery of nuclear fission. In collaboration with Halban and Kowarski, Savic determined the effective cross section of uranium for the absorption of thermal and resonance neutrons, which was later on the base for the estimation of chain reactions in nuclear reactors. At the beginning of World War ll, Savi came back to Belgrade and joined the partisans in 1941. Since April 1944, he worked in Moskow at the Institute for Physical Problems where he researched the behavior of liquid helium.When he retumed to Belgrade, in 1947, he conducted the construction of the nuclear institute (nowadays INN "Vinca"). In the newly founded institute,
Pavle Savic and his colleagues introduced and worked out the method of direct uorimetric determination of uranium, developed the method for catalytic production of heavy water, and the process for separation of radium by the method - paper chromatography. Pavle Savic in collaboration with the mathematician, Radivoje Kasanin, proposed a theory of behaviour of materials under high pressure, also known as the Savi - Kasanin theory. For his scientific research work, Savic was awarded with highest Yugoslav and international recognitions, the order of the Legion of Honor (officer degree), the Rutherford medal, the Lomonosov Gold Medal and the honorary doctorate from the University of Belgrade. He was the member of many academies in the country and abroad. 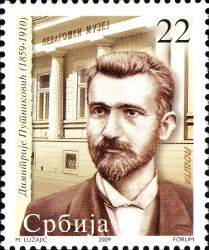 150 years after the birth of French physicists and chemists Pierre Curie (1859-1906).
French physician and chemist, born on May 15th, in 1859. He started his education at home (where he was educated by his father) and afterwards enrolled at the Sorbonne University of Science. Pierre graduated physics in 1878 and got his doctorate in 1895 when he was also appointed professor of physics. In 1880, Pierre and his brother Jacques discovered piezoelectricity (electric potential generated with compressed crystals) and made an electrometer. He proved the effect of temperature on ferromagnetic behavior of some substances. This temperature is nowadays known as the "Curie point". Pierre and Marie Curie, his wife, investigated the radiation emissions of radioactive substances, which correspond to alpha, beta and gamma radiation. On January 19th, in 1898, they announced their discovery of radium and polonium.

They were the first to use the term "radioactivity", and were pioneers in its study. Their scientific works proved that radioactivity in general doesn't depend on extemal circumstances. For their great accomplishments, Pierre and Marie, were awarded half a Nobel prize in physics, while Henri Becquerel was awarded the other half. That same year, in London, the couple Curie was also awarded the Davy Medal of the Royal Society. Pierre died on April 19", in 1906, in a car accident. In 1910, in honor of Pierre Curie, the unit of radioactivity was named "curie" by the Radiology Congress.

150th birth anniversary Demetrius Putnikovic (1859-1910.)
Born in Kasidol, in a priests family. He finished his primary education in Smoljinac (Pozarevac) and the grammar school and college of Forestry and Agriculture in Pozarevac. In 1880, he graduated at the Teacher Training School in Belgrade. He was a teacher and pedagogue. He proved himself to be an educator in society, education and pedagogy by widening the horizons of others. He was awarded the decoration of St. Sava (5th degree). Putnikovic wrote a great number of articles, dissertations and debates, He published a line of works of children's and youth literature, as well as auxiliary school books, which were in use until 1936. ln the period from 1894 - 1895, the government of that time sent him to Prague to study the Czech school system. According to his recommendation, the state accepted and founded civil schools in Belgrade, Jagodina and other towns in spite of the opposition of one part of the community. The School Museum, nowadays Pedagogical Museum, was founded in 1896, during the Xlll Teachers Assembly, when the "Serbian Teachers" Association confided the founding of the School Museum to Dimitrije J. Putnikovic who was its first headmaster .. Putnikovics educational work was appreciated by the intellectual public of those days. That fact is confirmed with 14 obituaries printed in the year 1910, in magazines and daily press.

Acknowledgement: Many thanks to Serbian Stamps Shop and Janos Vida from Senta, Serbia for help to find an information about these stamps.