Serbia 2020 "125th anniversary of the Natural History Museum in Belgrade" 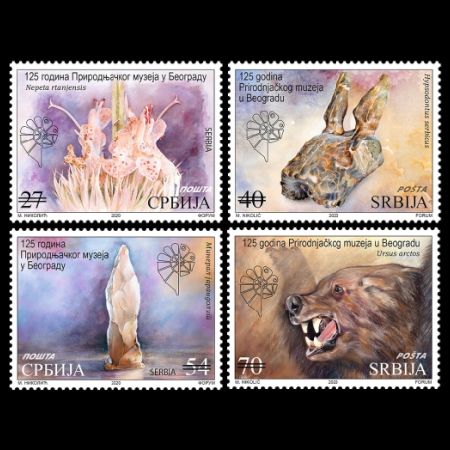 On November 3rd 2020, Serbian Post Authority issued a set of 4 stamps with title "125th anniversary of the Natural History Museum in Belgrade".


The Natural History Museum was founded on 19 December, 1895 as Jestastvenički muzej srpske zemlje (Natural Science Museum of Serbian Land) and is one of the oldest scientific and cultural institutions in Serbia.
The Natural History Museum has also one of the oldest and richest expert libraries in the Balkans, containing over 27.000 books, manuscripts, scientific periodicals, geographic and geological maps. The museum is also the first specialized institution whose three main and inseparable activities are scientific study, protection and presentation of national natural heritage.


Prior to the foundation of the Museum, in the first half of the 19th century, in the former Principality of Serbia, there was a large number of natural history collections, predominantly kept in the Natural History Cabinet of the Great Lyceum (Great School).
Josif Pancic, who is commemorated on stamp of Serbia in 2014, is considered to be the founder of the Natural History Museum who, accompanied by his associates and students, systematically collected, studied and extracted specimens from nature to be exhibited.
Thoroughly investigating the flora of Serbia during his era, he discovered and described about 50, scientifically valid, plant species. He was the first president of the Serbian Royal Academy and the Great Lyceum professor and became the first manager of the Museum.
The first exhibition of the Museum was held in 1904 in Belgrade, in the presence of King Peter I and his officials.

Nowadays, the Museum has 120 collections containing more than 2 million objects, which ranks the Museum amongst the leading Natural History Museums of South-East Europe. These collections span the history of the Earth from 4.5 billion years ago to the present, ranging from meteorites from the time of formation of the solar system, hundreds of millions of years old fossils, to specimens of Serbian spruce and flower Ramonda serbica (discovered and described by Josif Pancic) as well as a lot of unique HOLOTYPES — type specimens by which newly discovered species were described for the first time.
The museum is the only one of its kind in Serbia, however even today the museum does not have permanent exhibits. Instead a variety of activities including temporary exhibits, promotions, presentations and conferences are organized at the museum’s secondary site, the Gallery at Kalemegdan. Due to the fact that the area of the gallery is only about 200m2 (much to small to show even a fraction of all of the significant objects in their collection), the Museum prepares and mounts 3 to 4 temporary exhibitions a year.
Many Serbian scientists wish to have a bigger, more modern building, which is actually constructed for the purpose of being a museum with ample space for both permanent and temporary exhibits and more space for storage of the collections.

Nevertheless the lack of space, the Museum is very active in Serbia.
The Museum’s staff participate in local and international conferences and seminars, maintain a prolific production and publication of scientific papers in periodicals, and are often involved in projects in the country and abroad.
The Museum cooperates with other museums in Serbia and abroad, governmental and nongovernmental organizations, and various faculties of the University and the Serbian Academy of Sciences and Arts.
In 2009, as result of cooperation between the Natural History Museum and GGPCLA Grupo Cultural from Argentina, Serbian people were able to see many of Argentinian Dinosaurs in the Impulse hall of the hotel "Continental" in Belgrade.
The exhibition "Dinosaurs of Argentina - Giants of Patagonia", which includes original skeletons and reconstruction of many dinosaurs and other Mesozoic reptiles. It was a very significant culture event in Serbia in 2009 and attracted many visitors.

Argentinian Dinosaurs on stamps of Serbia 2009


The Museum maintains fruitful cooperation with the media, involved in the filming of specialized TV programs and films, participates in the preparation of TV and radio contributions and newspaper articles, and prepares media releases, as well as supports publishing houses that produce specialized editions and monographs.
One of the stamps from "125th anniversary of the Natural History Museum in Belgrade" set shows a fossil from paleontological collection of the Museum.

EXTINCT CROOKED HORNED ANTELOPE (Hypsodontus serbicus)
During a 1969 excavation in Prebreza, experts from the Natural History Museum found a fossilized skull of a hitherto unknown representative of early bovids, species of extinct Hypsodontus genus.
To show its significance to Serbian science, it was named Hypsodontus serbicus. 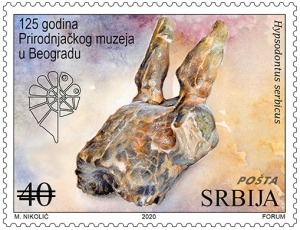 The paleontological site of Prebreza in southern Serbia is an important European mammalian site of Middle Miocene age (about 15 - 12 million years ago). The presence of various species shows the migration routes of various taxa in an intercontinental exchange that occurred between Europe, Asia and Africa.

Hypsodontus serbicus is the only known representative of the group west of Belomechetskaia, Georgia, while this genus has an Asian origin, and may have been present in Arabia as well.
Hypsodontus was a medium, slender, long-legged bovid with estimated weight of about 110kg with relatively short but curved and twisted outward horns.
The shape of the body must have resembled that of some current antelopes, and the legs were particularly elongated.
Hypsodontus's long legs indicate that this animal was well adapted to an open environment, and was likely a good runner. The high-crowned teeth indicate that Hypsodontus was able to feed on grass and other particularly tough and fibrous plants, in a way very similar to that of today's horses.

The other three stamps of the set show the domestic plant (RTANJSKA METVICA), mineral (JARANDOLITE MINERAL) and the recently extinct animal (The BEAR OF JASTREBAC MOUNTAIN).


Acknowledgements:
Many thanks to Dr. Peter Voice from Department of Geological and Environmental Sciences, Western Michigan University, for his draft page review and his valuable comments.