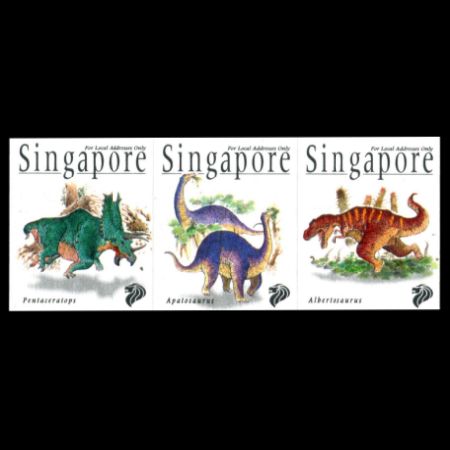 Dinosaurs are probably the best-known prehistoric life. Their dynasty
started 230 million years ago, in the Mesozoic Era, from the Late Triassic until the end of Cretaceous, a total of 165 million years.
Two groups of dinosaurs existed, the saurischian (or lizard-hipped
dinosaurs) and the ornithischiun (or bird-hipped dinosaurs), and they can be plant or meat-eaters. Many myths and legends have been told about the dinosaurs. Some are based on facts, others no more than guess work. The three dinosaurs featured here are from different family groups and lived in different periods. Fossil findings shows that all existed in North America during the Mesozoic.
The sheet 15 stamps was sold exclusively via OCBC (Oversea Chinese Banking Corporation) ATMs for limited period of time. Within that period, two different designs(back of the sheet) were issued. They were designed with exactly the same dimensions(156mmx74mm) as the currency note of SGD 50 and very thin (less than 0.13mm ) so that they can be issued through the same aperture. (New notes with a different dimensions were issued in 1999)


There were only 2 such issues, the other was Palm Tree issued in 1993. They were issued through arrangement by the bank with Singapore Post.

Acknowledgement: Many thanks to fellow stamp collector Ai Lyn Lim from Singapore, for her help to find some additional information about these stamps.

References: Inside text of and FDC