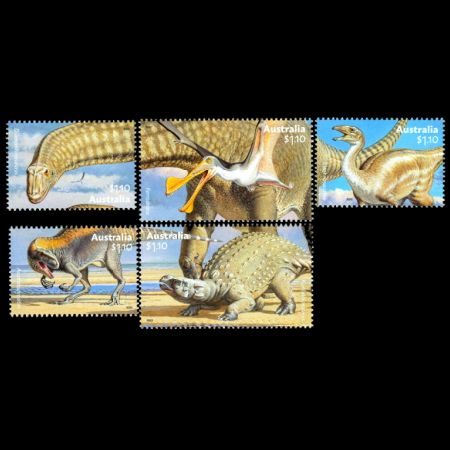 On September 5th, 2022, the Post Authority of Australia issued the set of 5 stamps "Australian Dinosaurs". However, not all prehistoric animals shown on the stamps are dinosaurs - Ferrodraco is pterosaur.
These stamps were issued in several formats: individuals Sheets of 50, Mini-Sheet of 5, self-adhesive booklets of 10.
The Mini-Sheet recall the Mini-Sheet from 1993 (see below), both were based on Illustrations of Peter Trustler.


These stamps shows some prehistoric animals of the Mesozoic, with four dinosaurs and a pterosaur (winged reptile) from the Cretaceous Period (145–66 million years ago).
During the Cretaceous Period, present-day Australia was joined to Antarctica, New Zealand and South America, and close to Africa, forming the supercontinent Gondwana.
Around 80 million years ago, New Zealand drifted away from the rest of Gondwana. The Australian part of Gondwana was located close to the South Pole and had a cool, wet climate.
A shallow inland sea, the Eromanga Sea, covered nearly a third of what is now Central Australia. These vast floodplains between Antarctica and southern Australia provided an ideal habitat for dinosaurs and pterosaurs.
Forests made of araucarians and podocarps covered much of the land, with small and large ferns, gingkoes, cycads, clubmosses and horsetails making up an understorey, with just the beginnings of the flowering plants.

The titanosaurian sauropod (meaning lizard-footed) Diamantinasaurus matildae lived during the Mid-Cretaceous Period, around 100 million to 95 million years ago, in what is now southern central Queensland.
This solidly-built animal was about 15 metres in length, 3 metres tall at the hip, with estimated weight of 15 to 20 tonnes and would have been comparatively small for a titanosaur.
The first fossilised bones were found in 2005 near Winton, Queensland. The dinosaur was described and named in 2009 (after four seasons of excavations) by Australian paleontologist Scott Hocknull et al., from Queensland Museum in Brisbane. The find was apparently the largest dinosaur discovery in Australia that was documented since that of Muttaburrasaurus in 1981. (Muttaburrasaurus was depicted on one of the stamps in 1993 (third from the left on the Mini-Sheet above) and on a commemorative postmark in 2014.)
The name Diamantinasaurus matildae is derived from the location of the nearby Diamantina River and the Greek word sauros, "lizard". The species name matildae honours a national song of Australia, "Waltzing Matilda" penned by poet and writer A.B. "Banjo" Patterson whilst visiting near the town of Winton in 1885.
Around 30% of the skeleton has been recovered, making it the most complete Cretaceous sauropod ever found in Australia.
The known skeleton (nicknamed “Matilda”) includes most of the forelimb, shoulder girdle, pelvis, hindlimb and ribs, one shoulder bone, a radius and some vertebrae.

This theropod (three-toed) dinosaur lived during the Mid-Cretaceous Period and was discovered near Winton, Queensland.
Nicknamed “Banjo” (after the Australian poet, Banjo Paterson), its skeleton was found intermingled with the bones of Diamantinasaurus matildae.
The dinosaur was described and named in 2009 (after four seasons of excavations) by Australian paleontologist Scott Hocknull et al., from Queensland Museum in Brisbane.
Around 40% of its skeleton has been excavated to date, making it the most complete carnivorous dinosaur known from Australia.
Like all carnivorous dinosaurs, Australovenator was two-legged with smaller forelimbs.
It was also equipped with three scimitar-shaped claws and sharp teeth. A swift predator, Australovenator was about one-and-a-half metres high at the hip and five to six metres in length.
It has been suggested that Australovenator is a sister taxon to Fukuiraptor (shown on stamp of Japan in 2010 and several postmarks). Australovenator was about 6 meters long, with a body mass of 500 kilograms. Because it was a relatively lightweight predator, it was coined as the "cheetah of its time".

Note: According to an official press release of Australian Post "A claw of this dinosaur has also been found in Early Cretaceous rocks in Victoria and in Lightning Ridge, New South Wales." This is not correct.
The claw belongs to Australia’s largest carnivorous dinosaur, nicknamed “Lightning Claw” for its impressive size.
The hand claw would have been approximately 25cm in length and would have been used like a grappling hook to catch its prey.
"Lightning Claw", who lived around 100 million years ago, is estimated at 7 meters long, larger than Australovenator wintonensis.
This dinosaur has not been assigned to a species yet. While there is enough fossil material to assign it to the Megaraptorids, it is still to fragmentary to assign to a specific genus or species. Megaraptorids were large predatory dinosaurs that bore extra-long claws on their hands.

The near-complete, fossilised skeleton of Kunbarrasaurus dinosaur was discovered in 1989 near Richmond in north-western Queensland.
The genus contains only one species Kunbarrasaurus ieversi. The genus name is derived from Kunbarra - the word for 'shield' in the Mayi language of the local Wunumara people. The specific name ieversi honours Mr. Ian Ivers, the property manager who originally found the fossil.
This small, squat, armoured ankylosaur (“fused lizard”) is the most complete skeleton ever discovered from Eastern Gondwana (Australia, Antarctica, Madagascar and India) and the most complete ankylosaurian skeleton from the entirety of the Gondwanan continents and the most complete non-avian dinosaur skeleton ever found in Australia.
Even the stomach contents of Kunbarrasaurus were preserved—an exceptionally rare circumstance which has given us an unprecedented insight of the feeding preferences of this dinosaur.
It lived around the Eromanga Sea 103 million to 101 million years ago, in the Early Cretaceous Period.
It was a plant eater, and remains of this individual’s last meal were found in its stomach region. Kunbarrasaurus was quadrupedal and covered in bony armour on the head, back, abdomen, legs and along its long tail.
Around the size of a modern sheep, it had a parrot-like beak and an inner ear similar to that of a turtle.
In 1993, another small Australian ankylosaur dinosaur was shown on the stamp - Minmi paravertebra.
The holotype fossil was found in 1964 by Dr. Alan Bartholomai, a collaborator of the Queensland Museum, along the Injun Road, one kilometre south of Mack Gulley, north of Roma, south-east Queensland.
In 1996, Dr. Ralph Molnar from Queensland Museum published a brief description of the specimen, designating the fossil as a member of the genus Minmi: he thought it was the same genus as Minmi paravertebra, but a different species or subspecies. Since that time, additional preparation with acid and CT scans of the skull have facilitated further study by Lucy Leahey and others; in 2015 they suggested that the Richmond's ankylosaur was a completely different genus and species from the Roma Minmi.

Fossils from Ferrodraco pterosaur ("Iron Dragon" after the ironstone the fossil was found in), were found in the Winton region of central western Queensland in April 2017.
Ferrodraco genus contains the single species Ferrodraco lentoni. The species was named after the former mayor of Winton, Graham Thomas ‘Butch’ Lenton. The holotype specimen was nicknamed 'Butch'. It is the most complete pterosaur fossil from Australia.
The holotype specimen was initially discovered in April 2017 when cattle farmer Robert A. Elliott was spraying herbicide near Belmont Station. It was excavated by a team led by Adele H. Pentland.
Pentland and colleagues placed Ferrodraco into a phylogenetic analysis and found that it was an ornithocheirid most closely related to thw Australian genus Mythunga, the English genera Ornithocheirus and Coloborhynchus, and the South American genus Tropeognathus. They found that it was more distantly related to the anhanguerids, and several other ornithocheiroids.
Ferrodraco is the only pterosaur fossil known from the Winton Formation, and in 2019, it was the most complete pterosaur ever found in Australia.
This flying reptile had a wingspan of about four metres and lived around 96 million years ago, in the Late Cretaceous Period.
Until this discovery, only two species of Australian pterosaurs had been described, both based on fossil skull fragments.
This new species, a fully grown adult, includes a partial skull, five partial neck vertebrae and bones from both the left and right wings.
It is likely that it ate mainly fish and lived around lake and river systems.

In 2015 volunteer Jessica Parker discovered a 5-centimetre-long neck vertebra bone whilst helping out at the annual Dinosaur Dreaming excavation near Cape Otway, Victoria.
The sediments at the site date from the Early Cretaceous around 110 million to 107 million years ago. During this period, the climate of the Cape Otway region was cold, indicating that this animal could tolerate near-polar temperatures, which were warmer than that area today, as there were no ice caps. At first, the bone identified as a cervical vertebra (neck bone), was thought to have come from a pterosaur. Intriguingly for Swinburne University palaeontologist Dr Stephen Poropat and PhD student Adele Pentland, once the fossil specimen had been prepared it became clear that this was not a bone from the middle portion of the neck of a flying reptile.
Later on, the bone was assigned to Elaphrosaurus, a toothless theropod dinosaur species. It is not yet assigned to any genus because of its incompleteness.
Elaphrosaurine ran low to the ground on two legs and had a slender body, long neck, stubby arms, and a possibly toothless skull.
This dinosaur probably had a plant-based diet and did not hunt prey. Evidence suggests that elaphrosaurs started life eating a range of foods, including possibly tiny monotremes, insects and fruits, but shed their teeth as they aged, to be replaced by a horny beak.
This discovery suggests that elaphrosaurs were more widespread and lived over a longer period than previously thought.

Acknowledge:
Many thanks to Dr. Peter Voice from Department of Geological and Environmental Sciences, Western Michigan University, for his help to find an information for this article, the draft page review and especially for the text about opalisation process written by him.