Dinosaurs and other prehistoric animals, museums, flint tools on stamps and postmarks of Japan

Contents:
Japan, is an island country in East Asia. Located in the Pacific Ocean, it lies to the east of the Sea of Japan, the East China Sea, China, Korea and Russia, stretching from the Sea of Okhotsk in the north to the East China Sea and Taiwan in the south.
Japan it is often called the "Land of the Rising Sun".
Japan is a stratovolcanic archipelago of 6,852 islands. The four largest are Honshu, Hokkaido, Kyushu and Shikoku, which make up about ninety-seven percent of Japan's land area. The country is divided into 47 prefectures in eight regions. The population of 126 million is the world's tenth largest. The Greater Tokyo Area, which includes Tokyo and several surrounding prefectures, is the world's largest metropolitan area with over 35 million residents and the world's largest urban agglomeration economy. [R1]

The story of the postage stamps and postal history of Japan begins with official government posts, which had existed for some time prior to 1630, when they were reformed. In 1870, Baron Maeshima visited London to learn the workings of the British postal system, then founded Japan’s modern postal system in 1871. The first stamps were issued in April 1871, in a set of four covering the different postal rates; the intricate two-color design consisted of a pair of dragons facing towards the center, where the characters of value were printed in black. [R2]

Japan uses their own, traditional, calendar that is based on the length of time that the emperor reigns. Each time a new emperor begins to rule, a new counting of the years starts and the period acquires a new name. For example: 9.7.2 can be July 2nd, 1997 or July 2nd, 1934.
The first number is the year number since the new emperor began to rule, followed by the month and day.

Dates on all commemorative postmarks of Japan are of their traditional calendar. In case of international letters, additional postmark with international date placed on the cover. See examples on the right - two covers sent from the same post office on the same day. One sent to an address in Japan, the other to Germany. The cover to Germany has an additional postmark with international date, even thought it was not required, as all stamps were already cancelled by commemorative postmark. The second stamp on the cover to Japan is cancelled by regular postmark with Japanese date.


Official stamps of Japan related to Paleontology: fossils, dinosaurs and other prehistoric animals

[P] prefecture stamps.
From 1989 to 2007, prefecture stamps were also issued. Although valid for postage throughout the country, the designs are specific to the prefecture and are only sold in the prefecture's postal region. Starting in 2008, prefectural issues were available for sale nationwide. Moreover, the calligraphic style of the characters for "Japan Post" on each stamp were changed to reflect the style used in non-prefecture issues for most stamps. 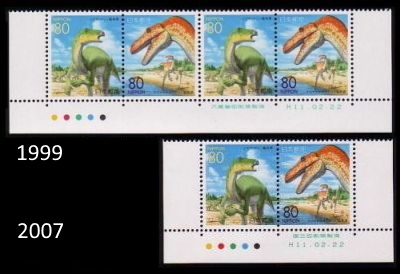 [1] Reprint of dinosaur stamps from 1999, not listed in stamp catalogs. There are several differences that can be observed at the bottom of these mini-sheets:

[2] Dinosaur Fukuiraptor depicted on one stamp from the mini-sheet of Fukui prefecture stamps. Fukuiraptor was a medium-sized carnivore of the Early Cretaceous (Barremian) that lived in what is now Japan.


[3] Two Mongolian dinosaurs shown on "50th anniversary of the establishment of Japan - Mongolia diplomatic relations" Mini-Sheet of Japan.
The dinosaur on the stamp is Saurolophus and a Sauropod on the margin.

Other stamps of Japan to consider: flint tools


Shells of the land snail species Mandarina luhuana from the Bonin islands of Japan are depicted on one of the stamps (in the second row, on right).
This extinct species lived during the Early Holocene. Some shells reported from Japan are dated to 1500 years old (based on carbon dating), while at another location, their age was estimated to be between 5000 and 13000 years old (using electron spin remanence dating.
The second set of ages are definitely old enough to be considered fossil material. [R11]


Some personalized stamps of Japan with dinosaurs and their fossils

[SP2] The Fukui Prefectural Dinosaur Museum is the largest museum of dinosaurs in Japan, displaying materials related to dinosaurs. [R4]
Some of depicted dinosaurs are: Camarasaurus, Tarbosaurus, Fukuiraptor, Fukuisaurus.
Fukuiraptor and Fukuisaurus are "native" Japanese dinosaurs.

Commemorative postmarks of Japan related to Paleontology: dinosaurs, prehistoric animals and its fossils

Many of the postmarks shown below are so called "Landscape" postmarks. Their design show most important landscape marks of the region: historical buildings, Buddha statues, some touristic attractions, as a ski resort for example, as well as some fossils and reconstructions of prehistoric animals who roamed the region in the past.
These postmarks available at specific post offices and are in use for very long periods of time. Some postmarks are in use for several decades, as a postmark with fossil of Desmostylus from Mizunami Bureau in Gifu Province, which was introduced in 1987 and available until now (2019).

Legend is here
Note: Images of some old postmarks are taken from old philatelic magazines - marked as [OS]. All real Japanese commemorative postmarks are red in color..

Notes:
[C1] Desmostylus is an extinct genus of herbivorous mammal of the family Desmostylidae living from 28.4 mya to 7.250 Mya. Desmostylus was a large, hippopotamus-like creature about 1.8 metres long which weighed about 200 kilograms. Most likely fully aquatic, Desmostylus is thought to have lived in shallow water in coastal regions. Many fossils of Desmostylus have been found at various locations in Japan. [R7] 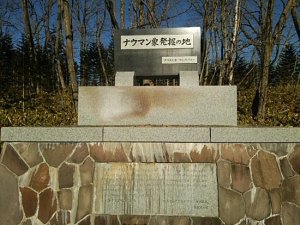 [C2] Naumann's elephant (Palaeoloxodon naumanni) is an extinct species belonging to the genus Palaeoloxodon, most closely related to the African Forest Elephant, that lived in Southern Japan in the late Pleistocene about 500,000 to 15,000 years ago. It is named after Heinrich Edmund Naumann who discovered the first fossils at Yokosuka, Kanagawa, Japan. The ancestor of Palaeoloxodon naumanni moved from the Eurasian continent to Japan via a land bridge; it subsequently evolved independently and spread throughout Japan after the land bridge was covered by rising seawaters. Palaeoloxodon naumanni was hunted by the inhabitants of the time.
In 1969, fossilized bones from a Naumann's elephant were discovered by chance during the construction of an agricultural road in Churui. Further archaeological excavations recovered the bones of nearly the entire elephant's skeleton. To commemorate this remarkable discovery, a museum was built, featuring numerous displays about the Naumann's elephant, including a restoration of the full skeleton. [R8]

[C3] The Takikawa sea cow (Hydrodamalis spissa) is an extinct herbivorous marine mammal of the Late Pliocene, which was closely related to the recently extinct Steller's sea cow Hydrodamalis spissa). In 1988, fossils of sea cows were discovered on Hokkaido island. [R9]

[C4] Mine is a city located in Yamaguchi Prefecture, Japan. One of the attractions in the region is Akiyoshidai Quasi-National Park, that served as a Natural History Museum.

[C5] There are 8 post offices in Katsuyama city with commemorative postmarks depicting Fukuiraptor (one of the postmarks looks very cartoonish, therefore it is not listed with the other postmarks above). Fukuiraptor is one of many dinosaurs on exhibit at the Fukui Prefectural Dinosaur Museum, which is located in Katsuyama city. Fukuiraptor ("thief of Fukui") was a medium-sized megaraptoran theropod dinosaur of the Early Cretaceous period. A partial skeleton was discovered at the Kitadani Quarry near Katsuyama in the Fukui prefecture. [R5]

[C6] Issued in several cities across Japan - the same design, but the city name on the bottom is different


[C8] Megalodon is a common name associated with a giant extinct shark that lived approximately 23 to 3.6 million years ago (Early Miocene to Pliocene) and depicted on several stamps around the world. Megalodon is actually a specific name for a species in the genus Carcharocles – Carcharocles megalodon.
There is a genus Megalodon – but this genus has nothing to do with sharks, but instead refers to a type of extinct bivalve molluscs that lived from the Devonian to the Jurassic. [R10]

[C9] In May 8th 2020, new landscape postmark was introduced by Japanese Post.
The postmark of Mifune town (population of 17,000) - Kamimashiki District, Kumamoto Prefecture.
The postmark shows a waterfall and skull of a "Mifune"" dinosaur.
A tooth of a carnivorous dinosaur discovered at the town in 1979.
It became famous as Japan's first carnivorous dinosaur fossil (common name: Mifneryu), perhaps relative of Allosaurus.
Later on many other fossils and footprints of dinosaurs and pterosaurs found at the place.
On April 1998 Mifune Dinosaur Museum was established in the town. [R12]