Dinosaurs, prehistoric animals, Charles Darwin on stamps of Democratic Republic of the Congo (KINSHASA ) and Zaire

Contents:
The Democratic Republic of the Congo, also known as DR Congo, DRC, DROC, Congo-Kinshasa, or simply the Congo is a country located in Central Africa. From 1971 to 1997 it was named Zaire. The DRC borders the Republic of the Congo, the Central African Republic, and South Sudan to the north; Uganda, Rwanda, Burundi and Tanzania to the east; Zambia and Angola to the south; and the Atlantic Ocean to the west. It is the second largest country in Africa by area, with a population of over 79 million.

The Democratic Republic of Congo is extremely rich in natural resources, but political instability, a lack of infrastructure, deep rooted corruption, and centuries of both commercial and colonial extraction and exploitation have limited holistic development. [R1]

The first stamps of the Democratic Republic Congo were issued right after its independence from Belgium, on June 30 1960.
In 1971, the state's name was changed to Zaire. The first stamps of Zaire were issued on 18 December 1971.
In 1997 the country's name reverted to the Democratic Republic of the Congo (DRC). Since then, the country issues its stamps under this name. 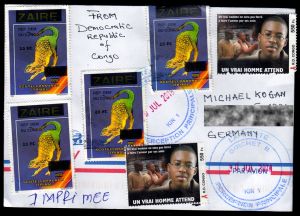 In 1996, Zaire authorized Swiss-based security printing company Impressor SA to produce and distribute stamps on the country's behalf.
Since 2003, Impressor SA started to produce stamps of the Democratic Republic of Congo (DRC) in excessive quantities on topics mostly unrelated to the country.
As there is no evidence that these stamps are sold at post offices within the Democratic Republic of Congo and so were never used for postage, some major stamp catalogs skip this country.


It is very likely the case that these stamps were produced and sold through affiliated dealers, with the goal to raise some currency for the poor country.
However, the cover on the right side prove that at least some of these stamps were sold by the local post offices.
The letter was sent to me in Germany in 2018 by a resident of the country.
Two stamps on the front side, and some more similar stamps on the reverse, with face value of 550 FC issued in 2005, MiNr. 1843, Yvert Nr. 1620, belongs to a set of 6 "Campaign against AIDS".

Due to the facts above these stamps should be avoided from serious collections and philatelic exhibition, therefore they are marked with a gray background as Undesired


Official stamps of Zaire related to Paleontology: dinosaurs and other prehistoric animals

[Z2] Unissued set of stamps. The stamps are distinguished from the similar stamps that were issued in various Mini-Sheets with the white frame.
This set of stamps was never released into circulation and were stored for future use.
In 2000, these stamps were overprinted with a surcharge and the new country name, Democratic Republic of Congo. Those overprinted stamps were released for sale.
The set without the surcharged text is extremely rare.
One of the stamps shows the Triassic dinosaur, Scutellosaurus – which had also been used for a mini-sheet issued the same year.

Stamps on the grey background are Undesired

Notes:
[1] This stamp shows the Triassic dinosaur Scutellosaurus, surcharged stamp from Mini-Sheet of 4 from Zaire 1996.
In 2000, many Zaire stamps were overprinted with a surcharge. Like other African countries, black bars were used to cross out the old country/colony name and face value. The position of the bars and the new face values could be shifted or have been printed multiple times as in the figures below.
In some cases, not enough ink was used to cover up completely the old name or face value.


Distinguished from the original stamps of Zaire, the surcharged Congo-Kinshasa stamps were issued in individual sheets. Unlike the original design, it can be clearly observed on the overprinted Scutellosaurus issues that several changes were made.
The surcharged stamps have a white margin. They also have the year of publication in the lower left corner and the name of the printer, Impressor SA printed on the bottom right corner.