Austria 1989 "75th Commemoration of the Death of Professor Eduard Suess" 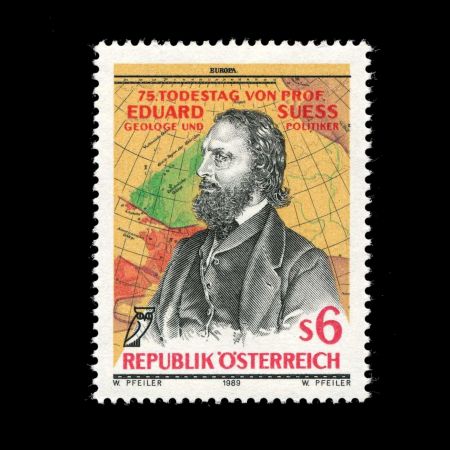 The geologist and politician Eduard Suess was born in London on August 20, 1831. He was full professor of geology at the University of Vienna and at the same time a full member of the Vienna Academy of Sciences. His first book "Der Boden der Stadt Wien" ("The Soil of Vienna"), which dealt with the correlation of geologic conditions and water supply, marked the beginning of his increasing scientific recognition from that time forward. He gradually developed views on the connection between Africa and Europe; eventually he came to the conclusion that the Alps to the north were once at the bottom of an ocean, of which the Mediterranean was a remnant. While not quite correct (mostly because plate tectonics had not yet been discovered - he used the earlier geosyncline theory), this is close enough to the truth that he is credited with postulating the earlier existence of the Tethys Ocean, which he named in 1893. Suess postulated that as sediments filled the ocean basins the sea levels gradually rose, and periodically there were events of rapid ocean bottom subsidence that increased the ocean's capacity and caused the regressions. This became known as the theory of eustasy (eustacy).His other major theory involved glossopteris fern fossils occurring in South America, Africa, and India (as well as Antarctica, though Suess did not know this). His explanation was that the three lands were once connected in a supercontinent, which he named Gondwanaland. Again, this is not quite correct: Suess believed that the oceans flooded the spaces currently between those lands, when in fact the lands drifted apart. Still, it is so similar to what is currently believed that his naming has stuck.