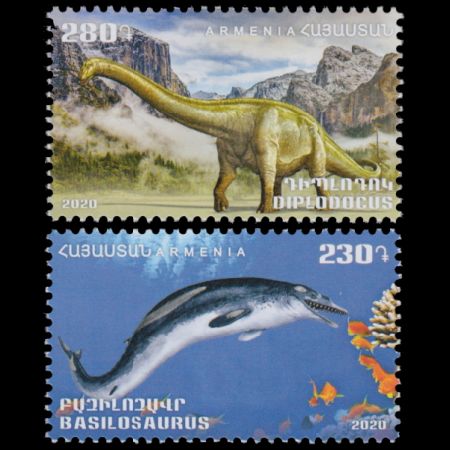 On June 16, 2020, the Post Authority of Armenia issued 4th series in their multi-year set (started in 2017) "Flora and Fauna of the ancient world".
It is a pity that like past stamps in this series, except the stamp of Mammuthus Trogontherii in 2019 , the animals selected have absolutely nothing to do with Armenia.


Basilosaurus (meaning "king lizard", as named in 1834, was originally classified as a lizard), also called Zeuglodon, is a genus of primitive whale from the late Eocene, approximately 41.3 to 33.9 million years ago. 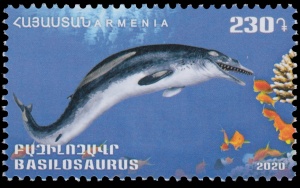 It was one of the largest, animals at this time and was the top predator of its environment, preying on sharks, large fish and other marine mammals. The animal attained a length of about 21 meters, with the skull alone as much as 1.5 meters long.
Even though this prehistoric whale still had hind-limbs, they were not connected to the rest of the skeleton and were too small to assist the animal in swimming.
Basilosaurus was the first completely aquatic group of whales. His ancestors, who had relatively long legs, were kind of amphibious and were able to spend some time on dry land.
Basilosaurus differed from living whales in having triangle-shaped teeth, small hind-limbs, and an elongated body with an extended tail.
Fossils of the prehistoric whale are found in North America, North Africa, Jordan and Pakistan. All locations are pretty far away from Armenia.
In 2016, the first complete skeleton of Basilosaurus, preserved with the remains of its prey, including a Dorudon (a genus of smaller ancient whales) and several species of fish, was uncovered in Wadi El Hitan. Wadi El Hitan in Egypt (means Valley of Whales) is one of the places where many fossils of the animal are found, as commemorated on stamps of Egypt in 2008.

Diplodocus is a genus of gigantic dinosaurs found in North America as fossils from the Late Jurassic Period (161 million to 146 million years ago). 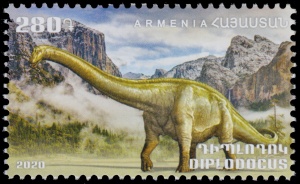 Similar to the Basilosaurus, Diplodocus has nothing to do with Armenia, even though it is depicted living in the modern mountainous landscape of Armenia!

It is also one of the first dinosaurs to appear on philatelic materials.
This dinosaur, with its typical sauropod shape, long neck and tail, and four sturdy legs, with estimated length of 24 meters, was considered the longest known dinosaur for many years after its discovery in 1878. The skull of Diplodocus was unusually small and rather light.

Initially it was assumed that all long-necked dinosaurs, such as Diplodocus and Brachiosaurus were aquatic, because of the position of its nasal openings and due to this reason it was depicted in many earlier reconstructions staying in the water.
Later, Diplodocids were often portrayed with their necks held high up in the air, allowing them to graze from tall trees.
Since the 1970s, the general consensus has the sauropods as firmly terrestrial animals, browsing on trees, ferns, and bushes. Recent research on the morphology of sauropod necks have concluded that the neutral posture of Diplodocus neck was close to horizontal.
Some scientists also suggest that these dinosaurs did not raise their heads much above shoulder level and have used their necks to graze over a broad area, instead of reaching up into trees. They may also have used their necks to reach into dense stands of conifers, or over marshy ground.