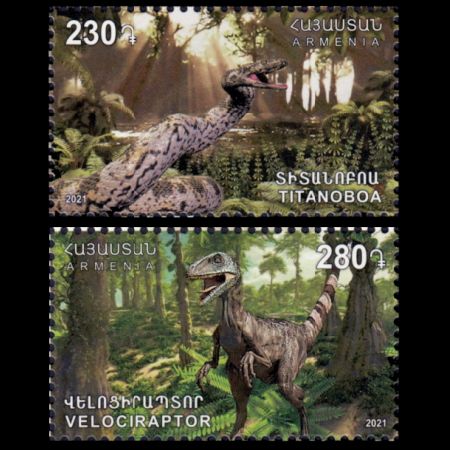 On May 6, 2021, the Post Authority of Armenia issued the 5th series in their multi-year set (started in 2017) "Flora and Fauna of the ancient world".
It is a pity that like past stamps in this series, with the exception of the stamp depicting stamp of Mammuthus trogontherii in 2019, the animals selected have absolutely nothing to do with Armenia.
Fossils of Titanoboa are known from Colombia only. Fossils of Velociraptor are known from central and eastern Asia (China and Mongolia) only.


Titanoboa is an extinct genus of the largest snake that ever lived. Paleontologists have estimated that the body length of the average adult Titanoboa was roughly 13 metres and the average weight about 1,135 kg.


Fossils of Titanoboa (Titanoboa cerrejonesis -the only known species to date) were found in a coal mine in the Cerrejón Formation in northeastern Colombia in 2004 by a team of North American scientists led by Jason Head at the University of Toronto, but were not described until 2009.
The team discovered remains of approximately 30 individuals, include at least one nearly complete specimen with a skull. The majority are adults, but some juveniles have been found too. The giant snake lived during the Middle to Late Paleocene epoch, a few million-year period immediately following the Cretaceous-Paleogene extinction event, around 58 to 60 million years ago.

Titanoboa was the top predator in the world’s first modern tropical rainforest and seems to have been related to anacondas and boas. This snake was the largest predator that we know of on the face of the planet following the extinction of the dinosaurs. The snake’s enormous size is thought to be closely tied to the much warmer climate of the Paleocene.
Titanoboa probably spent much of its time in the water, sharing a similar lifestyle with modern anacondas who spend most of their time in or near the water, where they hide amid vegetation in the shallows and ambush prey. It may have hunted crocodiles, fishes and turtles.


Velociraptor (meaning "swift seizer" in Latin) is a genus of theropod, turkey-sized, dinosaur that lived approximately 75 to 71 million years ago during the latter part of the Cretaceous Period. First discovered in 1923 in the Gobi Desert of Mongolia, fossils of Velociraptor were named and described by the famous American paleontologist Henry Fairfield Osborn in 1924.


Two species are currently recognized: Velociraptor mongoliensis - fossils of this species have been discovered in Mongolia and Velociraptor osmolskae - named in 2008 for skull material from Inner Mongolia, China.

Smaller than other dromaeosaurids (small to medium-sized feathered carnivores that flourished in the Cretaceous Period) like Deinonychus and Achillobator, Velociraptor nevertheless shared many of the same anatomical features.
It was a bipedal, feathered carnivore with a long tail and an enlarged sickle-shaped claw on each hindfoot, which is thought to have been used to tackle and disembowel prey.

A mechanical model of a Velociraptor claw was constructed for the BBC documentary “The Truth About Killer Dinosaurs”. Experiments were done with the claw to understand how it worked. The amazing result was that the claw could not be used to disembowel prey – instead their experiments showed that the razor-sharp claws were used for stabbing, not slashing. The claws were likely used as a hook to prevent the prey animal from escaping. Dr. David Button explained: "If you look at the claw it looks just like the talon of an eagle, which is used to grip prey and pin it down. Velociraptor probably used its sickle-shaped talon in the same way to injure, subdue and grip its prey, before dispatching it with its jaws."
Scientists know that dromaeosaurs like Velociraptor walked with only two toes on the ground. The famous foot claw was held up in the air, which would have helped keep it sharp.
Velociraptor can be distinguished from other dromaeosaurids by its long and low skull, with an upturned snout. It is one of the dinosaur genera most familiar to the general public due to its prominent role in the Jurassic Park motion picture series. Velociraptor was roughly the size of a turkey, considerably smaller than displayed in the movie.
Its estimated size is up to 2.07 meter long, 0.5 meter high at the hip and weighing up to 15 kg.

Velociraptor appears to have been a swift, agile predator of small herbivores, mostly probably it fed on relatively small mammals and reptiles that would have been easy to overpower and kill.
Today, Velociraptor is well known to paleontologists, with over a dozen described fossil skeletons. One particularly famous specimen preserves a Velociraptor locked in combat with a Protoceratops.
Even though the dinosaurs was covered by feathers it was flightless. Its feathers were potentially for display - to help attract mates - and to keep it warm, as well as the dinosaur might have used its feathered arms to cover their nests while brooding.