Contents:
Togo, officially the Togolese Republic, is a country in West Africa bordered by Ghana to the west, Benin to the east and Burkina Faso to the north.
It extends south to the Gulf of Guinea, where its capital Lomé is located.
Togo covers 57,000 square kilometres, making it one of the smallest countries in Africa, with a population of approximately 7.5 million.
Togo gained its independence from France in 1960. [R1]

Togo joined the Universal Postal Union on 21 March 1962.
Togo was one of the first clients of the Inter-Governmental Philatelic Corporation (IGPC). Since 2010, Togo has been a client of Stamperija. Stamperija produces hundreds of stamps covering every popular topic per year on the behalf of Togo. [R2]

Official stamps of Togo related to Paleontology and Paleoanthropology: fossils and reconstruction of prehistoric animals and humans, paleontologists, Charles Darwin


Notes:
[1] Ammonite on margin of the block.

[2] Carcharodontosaurus and Deltadromeus dinosaurs are on margin of Souvenir Sheet (just below the stamp).

[3] Elephas/Mammuthus primigenius shown on margin of Souvenir Sheet (top-right side).

[4] Carnufex carolinensis, shown on stamp from the Souvenir Sheet, is an extinct genus of Crocodylomorph suchian from the Late Triassic of North America.

[5] The first stamp on the mini-sheet shows Bos primigenius (Aurochs).
This species was the ancestor of modern domestic cattle and went extinct in the Holocene. The last individuals died out in 1627. The first stamp on the Mini-Sheet shown Bos primigenius, the ancestors of domestic cattle, extinct in the Holocene, some 300 years ago.

[6] "Flying dinosaurs" is not the correct term to apply to the animals shown on these stamps. The animals pictured are pterosaurs.
Pterosaurs are a group of flying reptiles in the Archosauria. Reptiles in the archosaurs include crocodiles, dinosaurs, and pterosaurs.

Some other stamps of Togo to consider 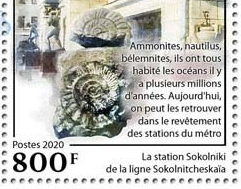 [A1] Fossil ammonites are shown on a stamp from the “85th Anniversary of the Moscow Metro” set (bottom right of the mini-sheet of 4 stamps). There is absolutely no reason for Togo to commemorate the anniversary of a Metro Station in Moscow, except to raise money from collectors.