Fossils, dinosaurs and other prehistoric animals and humans, petrified wood, Charles Darwin on stamps of Mozambique


Contents:
Mozambique, officially the Republic of Mozambique is a country in Southeast Africa with a population of about 25 million people. The capital and largest city is Maputo. The area was explored by Vasco da Gama in 1498 and colonized by Portugal from 1505. After over four centuries of Portuguese rule, Mozambique gained independence in 1975, becoming the People's Republic of Mozambique shortly thereafter. After only two years of independence, the country descended into an intense and protracted civil war lasting from 1977 to 1992. In 1994, Mozambique held its first multiparty elections and has remained a relatively stable presidential republic. Mozambique is one of the poorest and most underdeveloped countries in the world. [R1]

The postal history of Mozambique began with the Portuguese trading posts established at the beginning of the 16th century.

The territory began to use stamps in 1877, with the same design used in other Portuguese territories – a view of the Portuguese Crown.
Until 1998, Mozambique issued approximately 50 stamps per year.
The number of stamps issued began to increase in the 1990s – with 100 stamps in 1999 and more than 200 stamps in 2000. Most of the stamps had no link to the country.
In 2001, the country became a client of Stamperija, who currently produces many hundreds of stamps per year on the behalf of Mozambique.
Almost 700 stamps produced by Stamperija on behalf of Mozambique in 2018, for example. [R2] 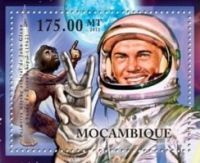 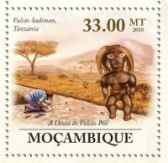 [1] On 30th September 2002, Stamperia issued more than 200 stamps of famous personalities, some of them show dinosaurs and Charles Darwin.

[3] Prehistoric human on the background

[4] "Flying dinosaurs" is not the correct term to apply to the animals shown on these stamps. The animals pictured are pterosaurs.
Pterosaurs are a group of flying reptiles in the Archosauria. Reptiles in the archosaurs include crocodiles, dinosaurs, and pterosaurs.


Notes:
[A1] Coelacanth, Latimeria chalumnae, shown on stamp from 1998 and on one stamp from "Fish" mini-sheet from 2007.
On 20 February 1939, the stunning announcement was made that a Coelacanth (Latimeria) had been caught off the mouth of the Chalumna River near East London (a city in RSA).
At that time, the Coelacanth was thought to be extinct for nearly 70 million years.
The drama commenced on 22 December 1938, when Capt H Goosen, skipper of the trawler Nenrine, brought ashore a peculiar metallic-blue, heavily-scaled fish with fins resembling legs.
Miss Marjorie Courtenay-Latimer, Curator o the East London Museum, was informed of the strange catch, but was unable to identify the fish, which measured 1,5 m in length and weighed 57 kg. "Searching for African Coelacanths" exhibit of Susan Bahnick Jones explain the story of the "living fossil" discovery.