Paleoanthropologists on stamps and other philatelic items.

Henri Edouard Prosper Breuil, often referred to as Abbe Breuil, was a French archaeologist, anthropologist, ethnologist and geologist. He is noted for his studies of cave art in the Somme and Dordogne valleys as well as in Spain, Portugal, Italy, Ireland, China with Teilhard de Chardin, Ethiopia, Somaliland and especially Southern Africa. [R1]
back to Top 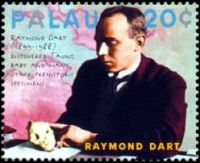 Australian-born South African palaeontologist and anthropologist who in 1924 discovered the first fossil remains of the australopithecenes, early hominids, near Taungs in Botswana. Dart named them Australopithecus africanus, and spent many years trying to prove that they were early humans rather than apes. Austalopithecus africanus was first discovered by Raymond Dart in 1925. He found a beautifully preserved skull of a juvenile, three to four years old. This skull, commonly known as the Taung Child, for Taung South Africa where it was found, is perhaps the best preserved fossil of A. africanus known. Australopithecus africanus has a somewhat dish shaped facial structure with teeth that are relatively large compared to modern humans. While it has larger front teeth compared to the back the emphasis is on back tooth grinding. As a result, a sagital crest is present on males for the attachment of large muscles.This creature is rather lightly built and has a small cranial capacity of about 440 cc on the average. It first appeared approximately 2.5 million years ago and had a rather short 1 million year existence. Many anthropologists believe that A. africanus belongs on the line that leads to Homo. [R2]
back to Top

In 1881,Ales Hrdlicka immigrated with his family to the United States from Humpolec, Bohemia (presently located in the southern part of the Czech republic). After receiving his medical degree in New York in 1892, his interests gradually shifted from the biological basis of abnormal behavior to normal human variation and evolution. In 1903, he joined the staff of the Smithsonian Institution in Washington D.C. and conducted research in physical anthropology there until his retirement in 1942 and death in 1943. Hrdlicka is widely recognized as an early pioneer in the development of American physical anthropology. His work can be traced to much of the current academic activity in physical anthropology at the Smithsonian and elsewhere. [R3]
back to Top 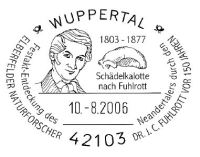 Prof. Dr. Johann Carl Fuhlrott (1803-1877) was an early German paleoanthropologist, who is famous for recognizing the significance of the bones of Neanderthal 1, a Neanderthal specimen discovered by German laborers who were digging for limestone in Neander valley (Neanderthal in German) in August 1856. Originally disregarded, Fuhlrott, to his eternal credit, had the insight to recognize them for what they were: the remains of a previously unknown type of human.
Fuhlrott identified them as human and thought them to be very old. He recognized them to be different from the usual bones of humans and showed them to the Professor of Anatomy at the University of Bonn, Hermann Schaaffhausen. Together they announced the discovery publicly in 1857. In their view the bones represented the remnants of an ancient human race, different from contemporary humans.
Today, Fuhlrott and Schaaffhausen are considered to be the founders of paleoanthropology, and the taxon they discovered is referred to as Homo neanderthalensis in honor of the site where it was first identified. [R5]
back to Top

Louis Seymour Bazett Leakey (7 August 1903 – 1 October 1972) was a Kenyan paleoanthropologist and archaeologist whose work was important in demonstrating that humans evolved in Africa, particularly through discoveries made at Olduvai Gorge with his wife, fellow paleontologist Mary Leakey.
Having established a program of palaeoanthropological inquiry in eastern Africa, he also motivated many future generations to continue this scholarly work. Several members of Leakey's family became prominent scholars themselves.
In the 1950s and 1960s, the Leakey family found more fossils of this type and of related types in the Olduvai Gorge of E Africa, establishing that Australopithecines were hominids, walked erect, made tools, and lived as early as 5.5 million years ago. After further discoveries in the 1980s, they are today classified as Homo sapiens australopithecus. [R6]
back to Top


Mary Leakey (6 February 1913 9 December 1996) - an eminent archaeologist and anthropologist, Leakeys discoveries were so significant that they forced scientists to radically change many long-held views about 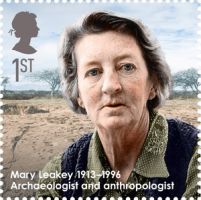 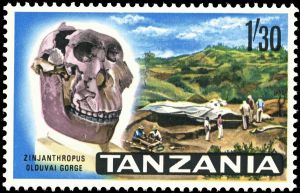 She was the one who discovered the first fossilized Proconsul skull, an extinct ape now believed to be ancestral to humans. She also discovered the robust Zinjanthropus skull at Olduvai Gorge . For much of her career she worked together with her husband, Louis Leakey, in Olduvai Gorge, uncovering the tools and fossils of ancient hominines. She developed a system for classifying the stone tools found at Olduvai. She also discovered the Laetoli footprints. It was here, at the Laetoli site, that she discovered Hominin fossils that were more than 3.75 million-years-old. She also discovered fifteen new species of other animals, and one new genus. In 1960 she became director of excavation at Olduvai and subsequently took it over, building her own staff. After the death of her husband, she became a leading palaeoanthropologist, helping to establish the Leakey tradition in the field. Mary died on 9 December 1996 at the age of 83, a renowned paleoanthropologist, who had not only conducted significant research of her own, but had been invaluable to the research careers of her husband, Louis Leakey, and their sons, Richard, Philip, and Jonathan. [R7]
back to Top


Dragutin Gorjanovic-Kramberger (1856-1936) was a Croatian geologist, paleontologist, and archeologist.

Krapina remains, fossilized remains of at least 24 early Neanderthal adults and children, consisting of skulls, teeth, and other skeletal parts found in a rock shelter near the city of Krapina, northern Croatia, between 1899 and 1905.
The remains date to about 130,000 years ago, and the skulls have strong Neanderthal features such as heavy, sloping foreheads and projecting midfaces. The teeth are exceptionally large, particularly the front teeth, and the limbs exhibit the form and strength characteristic of the Neanderthals and their predecessors.
The fragmentation of the Krapina fossils has led some to suggest cannibalism, perhaps during periods of starvation; lesions on the teeth indicate that starvation was a frequent occurrence. Trampling by animals is another possible cause for the shattered bones.
Krapina Neanderthal Museum was opened near Krapina Neanderthal sites in 1952.

Known Philatelic items:
back to Top