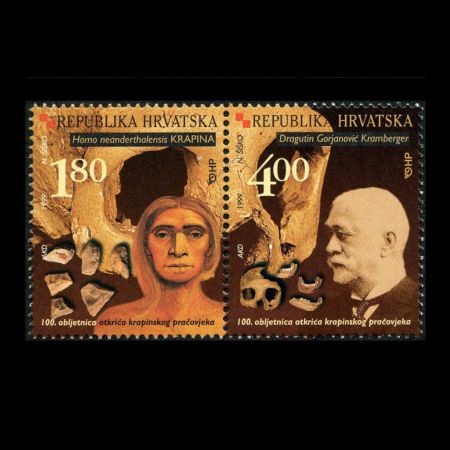 In August 1990 Croatian Post issued two stamps: 1.80 Kn, the recent reconstruction of a female person on the basis of bone remnants of the early man from Krapina (the author Rudolf Laba, academic painter), skull fragments and stone tools 100TH ANNIVERSARY OF THE DISCOVERY OF THE EARLY MAN FROM KRAPINA On August 23, 1899, Dragutin Gorjanovic-Kramberger, the well-known Croatian natural scientist, geologist and palaeontologist, discovered "strange bones" in the excavations of sand on the location called Brieg Hunjakovo in Krapina. The remains that he found were some bones of the primitive man, traces of a fireplace, flint-stone artefacts and numerous bones of antedeluvian animals - all of these findings proving that this pre-historic site originated from an exceptionally great, Pleistocene Age. Immediately following the first excavations of the Krapina site, which lasted up to 1905, after a universal elaboration and research of precious findings, Gorjanovic-Kramberger decided that these palaeontological and archaeological remains originate from the Paleolithic, the Old Stone Age, and that they belong to the Neanderthal man who lived here in the great Last Interglacial Age, or, as we presently know, at the time reaching 130 thousand years back. The collection of the early man from Krapina is the greatest palaeontological collection ever accumulated at some Neanderthal habitat, and this is the source of a great amount of scientific information on pre-historic European people. The collection includes remains of various body fragments, from skull bones to feet bones. Almost nine hundred bones, more or less complete, belonged to tens of different individuals, male or female persons of different ages. Together with the human remains of the early man, the collection also contains remnants of stone artefacts, most often flint scrapers and small knives that could be ascribed to the Mousterian Neanderthal culture. Numerous bones of extinct animals prove that there were many changes in the environment , but they also mean that the Neanderthal man was a skilful hunter and nomad. The Krapina collection of the early man is placed in the Dragutin Gorjanovic-Kramberger's Geological-palaeontological Department of the Croatian Natural Sciences Museum and is definitely the most precious holding of Croatian natural and cultural heritage as well as part of the world heritage. Together with other findings in Central Europe, the collection can prove many regional features of evolution of European pre-historic men within the time range of almost 2000 years. Considering the data obtained from the multitude of patterns, the Neanderthal men from Krapina within this framework represents the pivotal link and bases for the scientific concepts about the men from the geological past.