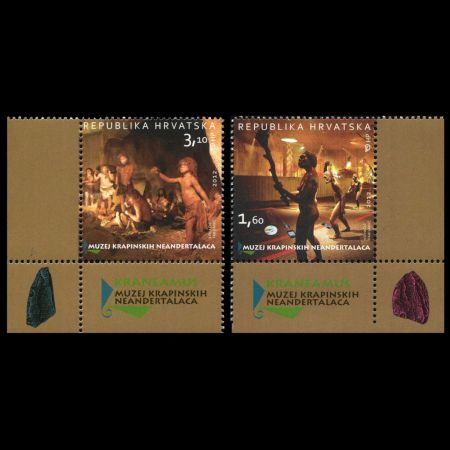 Since its opening, the Museum of the Krapina Neanderthal Man has not ceased attracting an exceptional attention - from field experts equally as from the wide public; already a mere number of over 100 thousand visitors in the first year of its existence suggests the possible conclusion that the conceptual and investment project has fulfilled its scope. Museology practice, i.e. the intention of collecting, preserving and presentation of the remainders of natural and cultural heritage can be performed on different interest levels and from different interpretational aspects that are subject to change in accordance with changes in social, ideological, aesthetic and even economic domain. Each museum enterprise -or more precisely said, the act of musealisation has the goal to archive but also to present and as such is an expression of a particular standard of approach to material and non-material heritage, but also - through its interpretational aspect it is a public act, and thus also a reflection of particular contextual facts, whereby the exhibits are just the objects of cognition.
What does the Museum of the Krapina Neanderthal Man tell us about the context, apart from, for sure, stimulating the cognition about the natural origin of human species? If we want to look for an answer to this question, it should be said that the context in the discussion that follows certainly wont be reduced only to local one. Although Jakov Radovcic and eljko Kovacic (the authors of the concept and entire communication project of the Museum) make part of modern Croatian culture, here we wont dwell upon deducing particularity from the local context reflected in the museum project, since that would, presently, be an almost impossible mission and such evaluation should be left for some future time, when the distance in time has done its work. The purpose of this text is - first of all - to suggest some global, cultural, given factors that in intellectual sense could figure as the context of emergence of this undoubtedly extraordinary project. Intellectual attitude and cognition as one level of theorising about musealisation will be the tool for establishing the possibility for evaluation of an interdisciplinary, scientific and artistic project by which the anthropologic and cultural findings of the Neanderthal men have been transformed into a simple and unique history lesson.
In simple words, the theme of the Museum is evolution - shown through global contextualisation of a local finding. In Krapina, this evolution has experienced a communications revolution as a new contribution to interpretation. If Gorjanovic Kramberger could have ever thought that one day in far future two enthusiasts would offer such a stratified interpretation of his findings in Hunjakovo, the least he probably would have been able to express would be disbelief. At that time in the 19th century when the museums - and especially Natural History Museums - were mostly the rooms of wonders - a kind of visual fascination rather than a scientific laboratory, no one could have dreamed about the multimedia communication level and multimedia interpretation. Actually, the standards of musealisation were dramatically distinct from those today. It was not due only to the development of media, but maybe - first of all, to the general philosophical attitude towards the past, to which just the industrial modernisation gave an important contribution in understanding the century that contained the most history than any other so far. Hence, the fact that in Kramberger time such a presentation was not possible, is not merely technologic but primarily intellectual matter, since only in modern times - recently also marked as post modernism, it has become legitimate for the museum to constitute itself as a public educational medium, and thus even the Neanderthal man - put in interpretational context - has sometihing to say to his modern viewer.
Feda Vukic
Related stamps:
Croatia 1999 "100th anniversary of the discovery of the early man from Krapina"