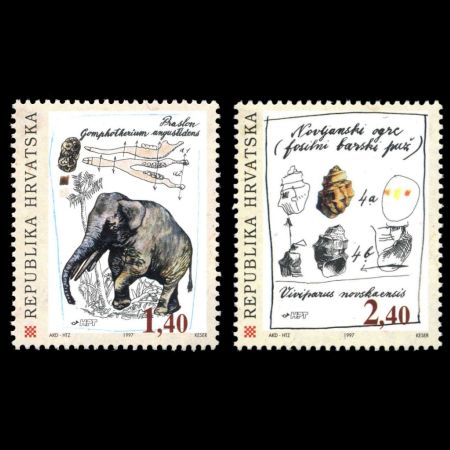 Miners have quite recently, between 1994 and 1996, dug up rather unusual bones of huge mammals from the bentonite clay mine. Palaeontologists have defined these fossils and attributed them to the remnants of long-time extinct species of fossil primordial elephants, the species defined as Prodeinotherium bavaricum and Gomphoterium angustidens. Their age can be assessed at about 18 million years. Viviparus is a species of fresh-water paludina that come from the Cretaceous Age of the geological past (about 100 million years ago). They were most widely spread in the Pliocene Epoch, when they lived in the spacious though shallow fresh-water lakes, which have developed due to the desalinization of the "Panonian Sea". Viviparus novskaensis is an extinct fossil species, most often found in the paludinian strata of the surroundings of the town Novska.