Mongolia 2022 "The Unique Findings Of The Mongolian Dinosaurs" 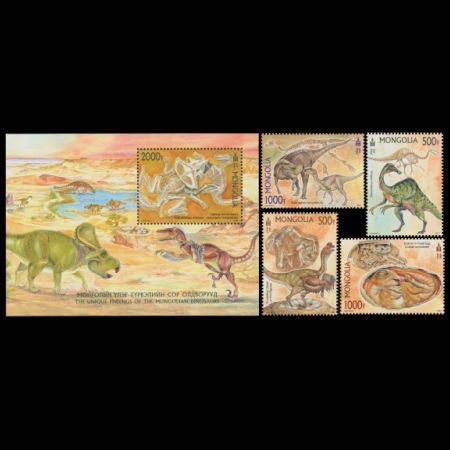 On May 30th 2022, Post Authority of Mongolia issued set of 4 stamps and a Souvenir Sheet "The Unique Findings Of The Mongolian Dinosaurs". These stamps and FDC were sold out in the on-line store of Mongolian Post during the day of issue.
Every stamp shows one of unique fossil found in Mongolia and reconstruction of the animal. The Souvenir-Sheet show entire scene of prehistoric life on the territory of Mongolia, with many dinosaurs on the margin.

The same day the Institute of Paleontology of the Mongolian Academy of Sciences (MAS) hosted the stamps presentation. Director of the Institute Professor, Ph.D. Khishigjav Tsogtbaatar, academician Rinchen Barsbold and Department Head S. Ulziitseren cooperated in creating the stamps by providing professional advice.


Dinosaur stamps presentation in the Institute of Paleontology of the Mongolian Academy of Sciences. Images credit: montsame.mn.

The stamp shows fossils and reconstructions of some world-famous dinosaurs unearthed in Mongolia. All Mongolian Dinosaurs were discovered in the Gobi desert.

The Mongolian Gobi Desert is one of the largest dinosaur fossil reservoir in the world.
The region is especially important as regards dinosaur fossils from the later Cretaceous period, which is the last of main three periods of the dinosaur age, representing the final phase of dinosaur evolution. Paleontologists still continue to discover fossils that prove the current territory of Gobi Desert had a very different climate and environment before 120 to 70 million years ago, during the Cretaceous period.
Over a history of over 100 years of dinosaur research, more than 80 genera of dinosaurs have been found in the Mongolian Gobi Desert and identified in science as individual groups, and over 60 fossil sites of dinosaurs and other vertebrates are being discovered by their spato-temporal distribution (from the earlier ages until late) across the Gobi Desert.

The history of paleontological research in Mongolia began in 1892, when Russian geologist Vladimir Afanasyevich Obruchev found on the border Inner and Outer Mongolia tooth of a Tertiary rhinoceros. Based on this discovery academician Aleksej Alekseevich Borisyak, founder and first director of the Paleontological institute in Moscow, suggested in 1915 that tertiary strata of Mongolia is similar to the strata in Kazakhstan, from where at that time the remains of various prehistoric mammals were known. Therefore, there appeared the possibility of discovering in Mongolia fossil faunas close to Kazakh.

These prognoses motivated the Central Asiatic Expedition of the American Museum of Natural History (AMNH) in the 1920s, leaded by one of the most famous American paleontologists and fossils hunter Mr. Roy Chapman Andrews.
The expedition found fossils of Late Cretaceous vertebrates (Protocerntops, small carnivorous dinosaurs, clutches of dinosaur eggs, mammals) at the Bayan Zag site in Southern Mongolia and Early Cretaceous dinosaurs (Psittncosnurus) and fishes in the Andai Khudag and Öösh sites in the Lakes Valley of Central Mongolia.
The Andrews's expedition also discovered the Palaeocene Gashato site near Bayan Zag and the Oligocene Ardyn Ovoo (= Ergil Ovoo,=Ergiliin Zoo) site in south-eastern Mongolia and the Tatal Gol site in the Lakes Valley, where they discovered many new Paleogene mammals.
The most famous discovery was, however, the discovery of dinosaur eggs, as it was the first discovery of dinosaurs eggs ever.


The dinosaurs on stamps
Citipati [R3]
Citipati (meaning "funeral pyre lord") is a genus of oviraptorid dinosaur that lived in Asia during the Late Cretaceous period, about 75 million to 71 million years ago. The somewhat unusual name comes from the Himalayan Buddhist deities that are the guardians of the funeral pyre.
Fittingly the Citipati are usually portrayed as a pair of dancing skeletons surrounded by a halo of flames.
This dinosaur was among the largest oviraptorids; it is estimated to have been around 2.9 meters in length and to have weighed 75–83 kg.
It is mainly known from the Ukhaa Tolgod locality at the Djadokhta Formation, where the first remains were collected during the 1990s. The genus and type species Citipati osmolskae were named and described in 2001. The specific name is in honour of Mrs. Halszka Osmólska, Polish paleontologist who had specialized in Mongolian dinosaurs, one of the leaders of the Polish–Mongolian Expeditions of the 1960s and 70s, which excavated so many important Gobi Desert dinosaurs.

Citipati is one of the best-known oviraptorids thanks to a number of well-preserved specimens, including individuals found in brooding positions atop nests of eggs, though most of them were initially referred to the related Oviraptor. These nesting specimens have helped to solidify the link between non-avian dinosaurs and birds.
In 1993 joint the Mongolian Academy of Sciences and American Museum of Natural History paleontological expedition discovered locality Ukhaa Tolgod the highly fossiliferous Djadokhta Formation, Gobi Desert. The site become one of the most important Late Cretaceous dinosaur localities in the world.


The dune sand at Ukhaa Tolgod contrain some clay that absorb water instead of draining quickly as is true of most sandy soils. As the sand dunes absorbed more and more water, they eventually went past a critical point, becoming unstable and collapsing into a sandy, liquid river. This sand river was what entombed the animals at Ukhaa Tolgod and preserved them in very good conditions during million of years.

One of the first important discoveries made by the expedition on the site was a small fossilized oviraptorid embryo, labelled as specimen IGM 100/971 (see below). At the time this was the first theropod dinosaur embryos known.
The oviraptorid embryo is composed of a nearly complete skeleton and was found in a badly weathered semi-circular nest, which also included two perinate (hatchlings or embryos close to hatching) skulls less than 5 cm (50 mm) of an unknown dromaeosaurid taxon. One of these skulls was reported to preserve portions of an eggshell.


Another important discovery of the expedition was a large (emu-sized) adult oviraptorid specimen. This new specimen was labelled under the specimen number IGM 100/979 (see on the right) and includes a partial skeleton comprising some ribs and partial limbs but lacking the skull, neck and tail.
The eggs are similar in size, shape, and ornamentation to another egg from this locality in which an oviraptorid embryo is preserved (see above), suggesting that the nest is of the same species as the adult skeleton overlying it and was parented by the adult.
The skeleton is positioned over the center of the nest, with both hind limbs tightly folded and the feet and lower legs almost parallel each other.
The lack of disturbance to the nest and skeleton indicate that the specimen is preserved in the position in which the adult died.
At least 15 eggs are preserved, each one is about 16 centimetres long and 6-7 centimetres wide. The eggs arranged in pairs in the circular pattern.
It has been found that oviraptorid dinosaurs, similar to crocodiles, had two functional oviducts, therefore it is reasonable to assume that two legs were laid at the same time, placed side by side.
Its posture is the same as that commonly taken only by birds among tetrapods that brood their nest, and its close proximity to the eggs indicates that the nest was not covered, indicating that the behaviour of sitting on open nests in this posture evolved before the most recent common ancestor of modern birds.
The nesting position of Citipati also supports the hypothesis that it and other oviraptorids had feathered forelimbs.
The specimen shortly became famous and was nicknamed as "Big Mama" by The New York Times press. There are, however, no indication on the sex of the dinosaur. By some modern birds, both males and females usually take turns sitting on the eggs, therefore this fossil could have been "Big Papa" too.


Deinocheirus mirificus [R4]
Deinocheirus is a genus of large ornithomimosaur that lived during the Late Cretaceous around 70 million years ago. Though it was a bulky animal, it had many hollow bones which saved weight. The arms were among the largest of any bipedal dinosaur at 2.4 meters long, with large, blunt claws on its three-fingered hands (see on the right).
The legs were relatively short, and bore blunt claws. Its vertebrae had tall neural spines that formed a "sail" along its back. Most of the vertebrae and some other bones were highly pneumatised by invading air sacs.
The tail ended in pygostyle-like vertebrae, which indicate the presence of a fan of feathers. The skull was 1.024 meter long, with a wide bill and a deep lower jaw, similar to those of hadrosaurs.
Deinocheirus is thought to have been omnivorous, as its skull shape indicates a diet of plants, fish scales were found in association with one specimen and gastroliths were also present in the stomach region of the specimen. The large claws may have been used for digging and gathering plants.

The first known fossil remains of Deinocheirus, a pair of large arms, shoulder girdles, and a few other bones, were discovered by Polish palaeontologist Zofia Kielan-Jaworowska, from the Polish-Mongolian Paleontological expedition (1963-1965), on July 9, 1965, at the Altan Ula III site in the Nemegt Basin of the Gobi Desert.
In 1970, this specimen became the holotype of the only species within the genus, Deinocheirus mirificus; the genus name is Greek for "horrible hand".
No further remains were discovered for almost fifty years, and its nature remained a mystery.
Two more complete specimens were described in 2014, which shed light on many aspects of the animal. Parts of these new specimens had been looted from Mongolia some years before, but were repatriated in 2014.
In 2021, the skeleton of Deinocheirus mirificus was printed on a margin of "100 years of modern science" Souvenier Sheet of Mongolia.

Between 1993 and 2004, the Mongolian Palaeontological Center and the Japanese Hayashibara Museum of Natural Sciences excavated sites at Bayshin Tsav.
In 2019, the type species Gobihadros mongoliensis was named and described by a group of international paleontologists.
The generic name combines references to the Gobi Desert and the Hadrosauroidea. The specific name refers to the provenance from Mongolia.

The Fighting Dinosaurs [R6]
The Fighting Dinosaurs is a famous and scientifically important fossil specimen (shown on the stamp of the Souvenir-Sheet) that hails from the Late Cretaceous Djadokhta Formation of Mongolia.
It preserves a Protoceratops andrewsi and Velociraptor mongoliensis trapped in combat and provides direct evidence of predatory behavior in non-avian dinosaurs.
Apparently locked in combat, these two fighting dinosaurs were remarkably preserved in this action pose some 80 million years ago.

The specimen was discovered in 1971 by Polish-Mongolian paleontological expeditions in the Gobi desert and has caused much debate as to how both animals came to be preserved together with relative completeness.
Multiple hypotheses have been proposed, including a drowning scenario, burial by either dune collapse or sandstorm, or alternatively they were not buried simultaneously.


Another dinosaur to mention is Ankylosaur, who is shown on the backround of the Souvenir-Sheet and a cachet of one of the FDC. The Ankylosaurus is most likely is Tarchia tumanovae [R7]
Tarchia (meaning "brainy one") is a genus of herbivorous ankylosaurid dinosaur from the late Cretaceous of Mongolia.


Ankylosaurid dinosaurs, one group of Ankylosauria, are quadrupedal, herbivorous and have a heavily ornamented skull and parasagittal rows of osteoderms covering the dorsolateral surfaces of the body.

In 1970, a Polish-Mongolian expedition discovered an ankylosaurian skull near Khulsan. In 1977, Teresa Maryańska named and described the type species Tarchia kielanae.
The generic name is derived from Mongolian tarkhi, "brain" and Latin ~ia, in reference to a brain size presumed larger than that of the related form Saichania.
The specific name honours Professor Zofia Kielan-Jaworowska, the leader of the expedition.
Tarchia is the geologically youngest of all known Asian ankylosaurid dinosaurs and is the longest known Asian ankylosaur, with an estimated body length of 8 meters. The rocks in which Tarchia fossils were found likely represent eolian dunes and interdune environments, with small intermittent lakes and seasonal streams. Hence, we know that Tarchia was a desert animal. On the other hand, well-watered forest would have been present. Tarchia would have been preyed upon by Tarbosaurus.