Contents:
Gibraltar is a British Overseas Territory located on the southern end of the Iberian Peninsula. It has an area of 6.7 km2 and shares its northern border with Spain. The Rock of Gibraltar is the major landmark of the region. At its foot is a densely populated city, home to over 30,000 people.
The sovereignty of Gibraltar is a major point of contention in Anglo-Spanish relations as Spain asserts a claim to the territory. Gibraltarians overwhelmingly rejected proposals for Spanish sovereignty in a 1967 referendum and again in 2002. Under the Gibraltar constitution of 2006, Gibraltar governs its own affairs, though some powers, such as defence and foreign relations, remain the responsibility of the Government of the United Kingdom. [R1]

On the 1st January 1886 the Colonial Government of Gibraltar assumed control of its Postal Services. As an interim measure, Bermuda stamp plates were overprinted with 'Gibraltar' using different colors. These were replaced by Gibraltar's own design in December of that same year.
The first commemorative issue was in 1935. Since 1966 subjects of a predominantly local flavor have been chosen through international events are also featured. [R2]


Notes:
[1] Two stamps from the "125th anniversary of discovery of the Gibraltar skull" set contain 3 stamps: skull of Neanderthal woman, a "classical" Neanderthal type and lunchtime on the Rock 50,000 years ago. There are several Neanderthal fossils found at various caves in Gibraltar, including the first skull of a Neanderthal ever found. This fossil of a woman’s skull is depicted on the stamp with face value of 4p, discovered in 1848.

There are at least 5 known stamps of MiNr 299 that have an error – the name of the country was omitted. These stamps are cataloged as MiNr 299f. Copies were reportedly found in presentation packs and were later sold at auction for approximately 7000 euros.
A second error is not documented in the stamp catalogs to date (both errors are not listed in the 2017 Scott Catalog). The golden color was omitted during printing, leaving the country name black in color. This error is known from one FDC so far.

[2] Two stamps from the sheet of 16 shows some scenes from the prehistoric past of Gibraltar.
Megantereon, not to be confused with Smilodon, was a genus of prehistoric saber-toothed cat that lived in North America, Eurasia, and Africa.
In Europe the oldest remains are known from Les Etouaries (France), a site which is now dated to less than 2.5 million years old.
The youngest remains in Europe were found near Untermassfeld in Germany, and were estimated to be 900,000 years old.
Megantereon was built like a large modern jaguar, but somewhat heavier. It may have been the ancestor of Smilodon.
2 million years ago the landscape of Gibraltar was very different from today.
As a result of the ice age, sea level dropped exposed much new land around Gibraltar. This land was colonized by plants and developed a series of habitats including sandy pine woods, marshlands and plains.
There are also some indications that the sea level falls from time to time allowed a faunal exchange between Africa and Europe. [R4]

[3] One of the stamps shows some artifacts of the Gibraltar Museum.
Established in 1930, the Gibraltar Museum’s collection is of international importance and covers a wide range of Gibraltar’s natural history including exhibits on its prehistory, flora and fauna.
One such important artifacts is the skull of Neanderthal.
All three stamps have short descriptive texts on the reverse side of the stamp – as shown in the figure on the right of the stamp.

[4] The 2005 Darwin set was issued in honor of the 200th year since Charles Darwin’s birth.
Four stamps were issued as separate sheets – each stamp had descriptive text on the reverse side that explained the image on the front. A fifth stamp was issued as part of a souvenir sheet – no descriptive text was present on the back.

[5] Gorham's Cave is a natural sea cave in Gibraltar, considered to be one of the last sites inhabited by Neanderthals in Europe. Gorham's Cave gives its name to the Gorham's Cave Complex, which is a combination of four distinct caves of such importance that they are combined into a UNESCO World Heritage Site. Some Neanderthals are depicted on stamp with face value of 80p.

Other official stamps to consider: found place of Neanderthal fossils 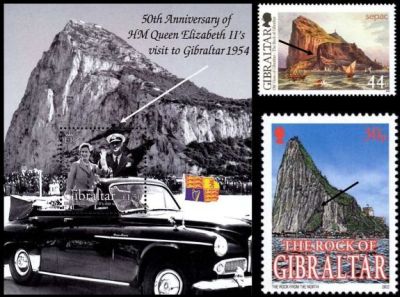 [A1] The Gibraltar Neanderthals first came to light in 1848 during excavations in the course of the construction of a fortification called Forbes' Barrier at the northern end of the Rock of Gibraltar. The skull of a Neanderthal was discovered in Forbes' Quarry by Lieutenant Edmund Flint, though its exact provenance is unknown, and was the subject of a presentation to the Gibraltar Scientific Society by Lieutenant Flint in March 1848. [R3]
The entrance to the cave is shown on three stamps, to date. The arrow point on the entrance to the cave on each stamp on the right side.
The northern end of the Rock of Gibraltar is shown on multiple stamps. New stamps and postmarks are issued frequently showing this most recognizable landmark of Gibraltar. The Rock also can be seen on some stamps of Spain.
Stamps of Gibraltar that shows the Rock: Stamps of Gibraltar that show the Rock are below

The First Day Cancellation of "Views of the Rock" stamps from 2018 , based on a sketch made by the famous Abbé Breuil in 1922 showing the two sites where Neanderthals have been found: Devil’s Tower (1) and Forbe’s Quarry (2).

[A2] The Rock of Gibraltar stamps from 2002 are the first stamps in the world produced with actual rock incorporated in the stamps. Limestone was bored out of the center of the rock, as accessed by the Rock's World War II tunnels.
The limestone was first powdered and then sintered within the image of Gibraltar where there is rock showing. The printing process used was offset lithography together with thermography layer or limestone.

[A3] The first stamps of Gibraltar in the crypto currency, shows the famous Rock.


The 50p stamp and its four-stamp collector block below has been created by local graphics designer Mr. Stephen Perera. Any of these 4 identical QR Codes when scanned with a smartphone/tablet offers the opportunity for first time owners of these collectible blocks to collect free crypto coins which will be freely traded. In order to make this QR code and unique concept a reality a website has been created which links when scanning the QR code to permit first owners of these limited-edition blocks to redeem 200 QRG Cryptocurrency tokens/coins for each block of these stamps, one time only per unique serial number, printed on the actual sheet.


Some personalized stamps related to Paleoanthropology: fossil of Neanderthal


Notes:
[P1] On 26.09.2007 Gibraltar's Post introduced a set of YouStamps®, the set of 5 stamps of the following themes: 'Let's celebrate'; 'With love'; Greetings from Gibraltar'; 'Commitment' and 'New baby' allows everybody to print their own image on the margin.

The "Greeting from Gibraltar" stamps shows the famous Rock from east side and west side on the margin. The Rock is known among Paleoanthropologists because of some Neanderthal fossils found there. 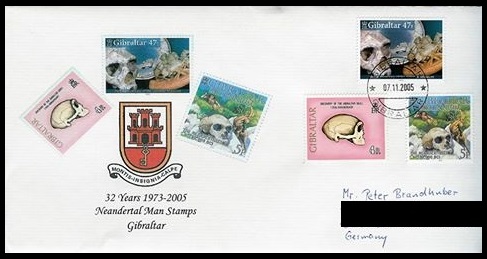 Peter Brandhuber, famous German stamp collector who collects philatelic materials of Anthropology and Human Evolution topic (also run the " Evolution of mankind and Philately" group on facebook), used the opportunity to produce the personalized stamp (see above) with Neanderthal skull found in caves in the Rock of Gibraltar.


Some stamps that appear to be related to paleontology, but are not


Notes:
[O1] This set has a misleading name, as all animal species depicted have living members in other parts of Europe or only recently became extinct.

Some postmarks to consider: places where Neanderthal fossils have been found