Charles Darwin on stamps and postmarks of Falkland Islands


Contents:
The Falkland Islands are an archipelago in the South Atlantic Ocean on the Patagonian Shelf. The principal islands are about 483 kilometers east of South America's southern Patagonian coast, at a latitude of about 52°S. The archipelago, with an area of 12,000 square kilometers, comprises East Falkland, West Falkland and 776 smaller islands. As a British overseas territory, the Falklands have internal self-governance, and the United Kingdom takes responsibility for their defense and foreign affairs. The Islands capital is Stanley on East Falkland. The population (2,932 inhabitants in 2012) primarily consists of native-born Falkland Islanders, the majority of British descent. [R1]

The first stamps, 1d and 6d values featuring the profile of Queen Victoria, were issued 19 June 1878. Unusually for a British colony, the first stamps were not on watermarked paper, but this was rectified in 1883. Additional values of this design appeared from time to time until 1902. In 1929 the first pictorial design appeared, featuring small images of a whale and penguins beneath the profile of George V. This was followed up by the much-admired centennial issue of 1933, a series of 12 stamps featuring local scenes and wildlife evocatively rendered. [R2]
So far the Falkland Islands have not issued any stamps showing dinosaurs, prehistoric animals or fossils, but there are several stamps of Charles Darwin, who visited these islands during his voyage on HMS Beagle. 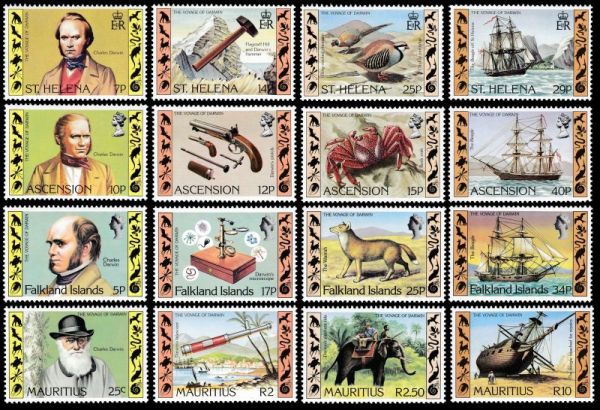 
One of the sets looks a bit different from other three.
Old Charles Darwin on the back of an elephant depicted on stamp of Mauritius, when the other three sets show a young Charles Darwin.

By the way, there are no native population of elephants on Mauritius, but Darwin did actually ride an elephant while he stayed on the island.
The elephant was provided by the Governor of the Island who had received the elephants as a gift from some Indian Mahraja.

[2] Charles Darwin among other great naturalists - stamp with face value of 54p.

Other stamps of Mauritius to consider: HMS Beagle and its captain Fitz Roy

[A2] The Warrah (Falkland Islands wolf), depicted on stamp with face value of 1.01 GBP, was The Falklands only native land mammal.
Its existence in isolation on the Islands fascinated Charles Darwin (Darwin and a warrah is depicted on stamp Falklands island in 1982 and 2009 ) and to this day remains something of an enigma.
Darwin noted the Warrah’s lack of fear of humans and predicted that it would become extinct once settlement was established.
He was right, and the last known Warrah was shot at Shallow Bay on West Falkland in 1876. Only a handful of Warrah specimens exist worldwide and until recently there were no remains held in the Falklands.
However, in 2010, Dale Evans (then 13 years old) discovered bones on his parents’ farm and DNA testing later confirmed these as Warrah.
Carbon-dating has shown that the bones are at least 1,000 years old, making them the oldest known remains of the species. [R4]