Contents:
Saint Helena is a volcanic tropical island in the South Atlantic Ocean, 4,000 kilometres east of Rio de Janeiro and 1,950 kilometres west of the Cunene River, which marks the border between Namibia and Angola in southwestern Africa.
It is part of the British Overseas Territory of Saint Helena, Ascension and Tristan da Cunha.
Saint Helena measures about 16 by 8 kilometres and has a population of about 4,500.
It was named after Saint Helena of Constantinople.
The island, one of the most remote islands in the world, was uninhabited when discovered by the Portuguese in 1502.
It was an important stopover for ships sailing to Europe from Asia and South Africa for centuries. [R1]

The first stamp of St Helena was issued on 1 January 1856. It was a 6d blue imperforate stamp portraying Queen Victoria.
From 1863 to 1880, this stamp was issued in various colours, perforated and overprinted for each value from 1d to 5s.
This design continued to be used until 1884, when a new set of Victorian key types was issued for the colony. So far there are no stamps of prehistoric animals or fossils issued by the country, but several stamps relate to Charles Darwin who visited the island during his famous voyage on HMS Beagle. [R2] 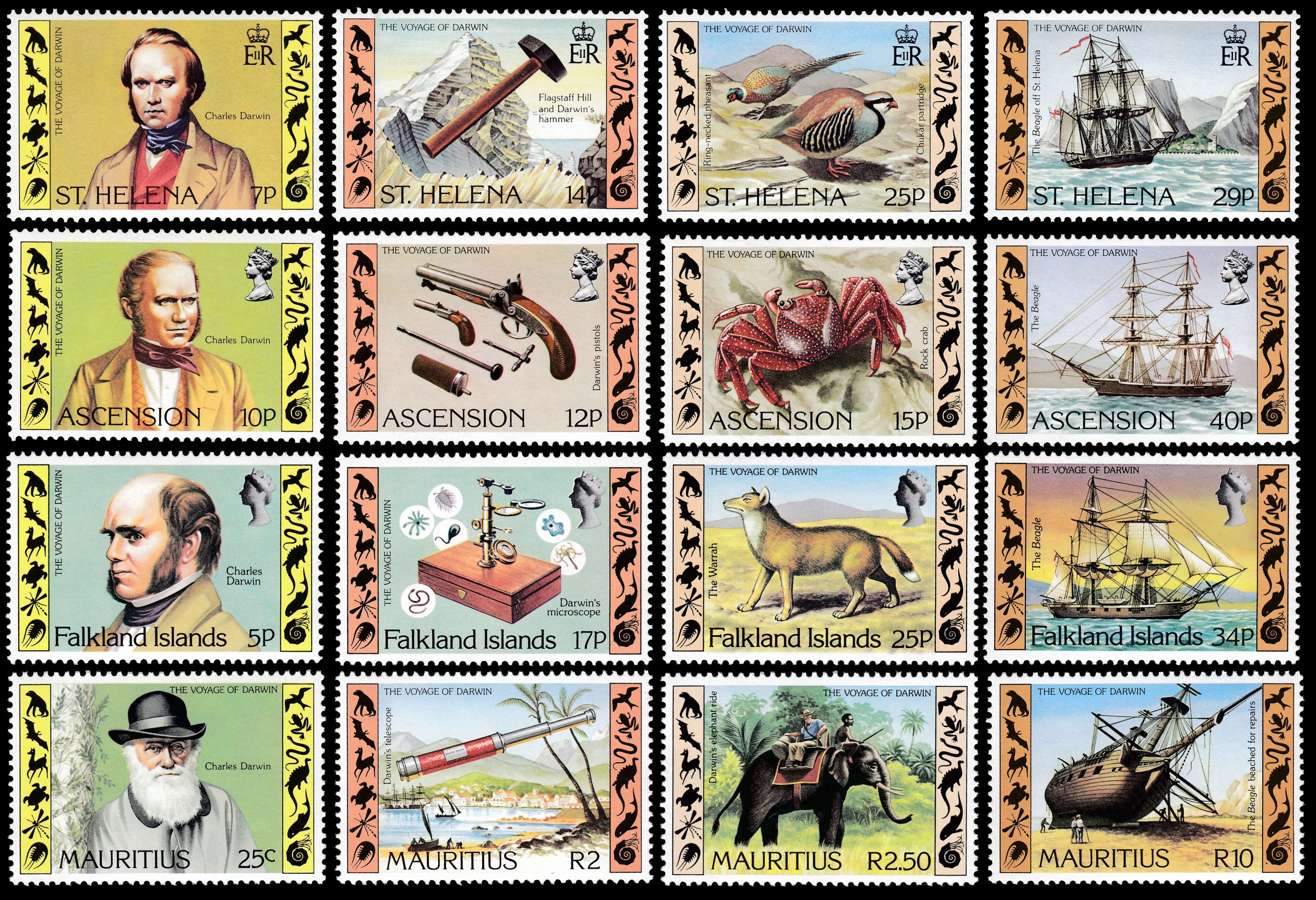 Charles Darwin (1809 -1882) was an English naturalist, geologist and biologist, best known for his contributions to the theory of evolution.
His proposition that all species of life have descended from common ancestors, was published in his most famous book "On the Origin of Species" in 1859. This theory is now widely accepted and considered a fundamental concept in all biological science, including paleontology.

Every set contain four stamps:
[2] Two stamps of the set, with face value of 25p each, depict Charles Darwin.

Other stamps of St. Helena to consider: HMS Beagle and captain Robert FitzRoy

[A1] Captain Robert FitzRoy and H.M.S. "Beagle", on the background, shown on stamp with face value of 3p.


Vice-Admiral Robert FitzRoy RN (5 July 1805 – 30 April 1865) was an English officer of the Royal Navy and a scientist.
He achieved lasting fame as the captain of HMS Beagle during Charles Darwin's famous voyage, FitzRoy's second expedition to Tierra del Fuego and the Southern Cone.
Before they left England, FitzRoy gave Darwin a copy of the first volume of Charles Lyell's Principles of Geology, a book the captain had read that explained terrestrial features as the outcome of outcome of gradual processes taking place over extremely long periods.
FitzRoy took a request from Lyell to record observations on geological features, such as erratic boulders.
FitzRoy and Darwin got on well together and even shared a cabin on the ship. [R3]


HMS Beagle was a Cherokee-class 10-gun brig-sloop of the Royal Navy, one of more than 100 ships of this class.
On the second voyage a young naturalist named Charles Darwin was on board; the pivotal role this round the world voyage played in forming his scientific theories made Beagle one of the most famous ships in history.
Darwin had kept a diary of his experiences, and rewrote this as the book titled Journal and Remarks, published in 1839 as the third volume of the official account of the expedition.
This travelogue and scientific journal was widely popular, and was reprinted many times with various titles, becoming known as The Voyage of the Beagle.
This diary is where Darwin drew most of the ideas for his publications. Darwin attributes his first real training in natural history to his voyage on the Beagle. [R4]

Acknowledgement:
Many thanks to Dr. Peter Voice from Department of Geological and Environmental Sciences, Western Michigan University, for the draft page review and his valuable comments.