Fossils, dinosaurs and other prehistoric animals on stamps and postmarks of Namibia


Contents:
Namibia, formerly known as South-West Africa and German Deutsch-Südwestafrika (GermanySouth-West Africa), officially the Republic of Namibia, is a country in southern Africa with population of 2.1 million people and a stable multi-party parliamentary democracy.
Formerly the German colony of South-West Africa during World War I and administered it as a mandate until after World War II, when it annexed the territory.
Its western border is the Atlantic Ocean; it shares land borders with Zambia and Angola to the north, Botswana to the east and South Africa to the south and east.
In 1966 the Marxist South-West Africa People's Organization (SWAPO) guerrilla group launched a war of independence for the area that became Namibia, but it was not until 1988 that South Africa agreed to end its administration in accordance with a UN peace plan for the entire region. Namibia gained independence from South Africa on 21 March 1990. [R1]

The first postal services in Namibia (then known as South-West Africa) started in 1814 with the deployment of messengers facilitating communication between the early mission stations at Warmbad and Bethanie and later to Keetmanshoop and Gross Barmen.
This service was expanded in 1846, connecting the South-West African mission stations to those in South Africa.
Namibia has issued regular definitive and commemorative stamps since independence.
In 1989, the last stamps of South West Africa were a set of 15 depicting minerals and mining.
Shortly before their issue in 1990, the territory gained independence as Namibia.
As the stamps were new, most of the designs were kept with only the name changed. [R2] 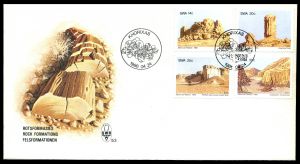 South West Africa issued no stamps related to Paleontological or Paleoanthropological science.
The only philatelic item worth mentioning is the FDC for the set “Rock Formations of South West Africa”.
Four stamps of the set shows some geologic formation of the country.
Owing to South-West Africa's semi-arid to arid climate, this territory is endowed with excellent exposures of rock formations. Many of them have unusual and sometimes striking forms. To the geologist their variety is an important source of information that can be used to unravel the complex geological history of this country.
Illustration on the commemorative (FDC) cover shows a trunk of petrified wood.
"The broken-up remains of petrified tree trunks are found in the Petrified Forest west of Khorixas in Damaraland. These fossil trees, which are at least 200 million years old, provide a rare record of primeval life forms that existed when Africa and South America were still linked up in a large single continent."


Notes:
[1] The Ediacaran biota is an enigmatic assemblage of organisms that lived during the Ediacaran Period at the end of the Precambrian.
This biota has been described from locations worldwide including from the Ediacara Hills of Australia, the Mistaken Point fauna of Newfoundland, the White Sea fauna of Russia and other localities such as Namibia and Death Valley in the United States.
Many of the fossils in this assemblage consist of enigmatic tubular and frond-shaped, mostly sessile organisms of uncertain taxonomic affinity. Many of these enigmatic organisms are shown on the Namibian set.
Other organisms in this biota are thought to be related to modern animals – the Australian 2005 set of the same theme shows examples of Tribrachidium (related to modern echinoderms like star fish), Spriggina (an early flatworm, and Kimberella (an early mollusk). [R3]
Australia and Namibia are unique in that they are the only countries so far to have honored Ediacaran organisms on stamps.