Sweden 2016 "Animals and plants from the Palace of Nature" 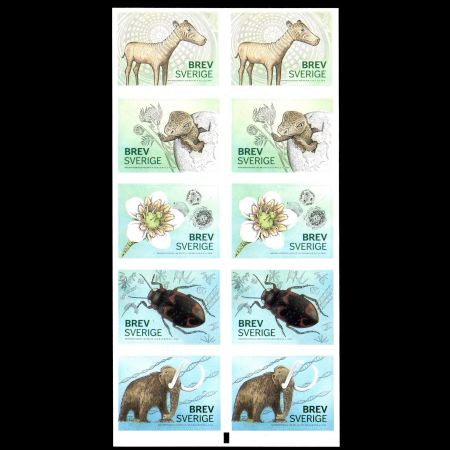 On January 14, 2016 Post Authority of Sweden issued a set of 5 stamps: Animals and plants from the Palace of Nature". Stamps issued in a booklet of 10. The Swedish Museum of Natural History celebrate its centennial in the building that is sometimes called the Palace of Nature. It is home to the outcome of the curiosity and thirst for knowledge demonstrated by men and women throughout the years.

The decision to construct the building that would house the Swedish Museum of Natural History in Frescati (Inspired by his trip to Italy in the 1780s, King Gustaf III named several areas in northern Stockholm after places in Italy) in northern Stockholm was made in 1901. The idea was that Frescati would become a center of science, and the museum a jewel in the crown of the Royal Swedish Academy. The museum and several other buildings were constructed over the period 1907–1916 based on drawings by architect Axel Anderberg, who also designed the Royal Swedish Academy’s building. The museum’s main building was built to be a monument and has its roots in the Baroque period as well as powerful, geometric Art Nouveau. The facades were dressed in dark red brick. The wings that extend from the main building were initially home to the museum’s departments at that time, zoology, paleontology and geology. The botanical department was given a separate building. In its early days, the museum did not have electric lighting and the buildings were therefore equipped with large, tall windows to allow daylight to shine on the exhibitions. Over the years, the Swedish Museum of Natural History has been expanded via underground chambers to store its extensive collections. Cosmonova, the museum’s combined planetarium and domed movie theater, was opened in 1992 in a separate building connected to the main building.
The museum is Sweden’s largest, and it contains more than ten million fossils, animals, plants, fungi and minerals. The stamp motifs depict a representative sample from the collections.