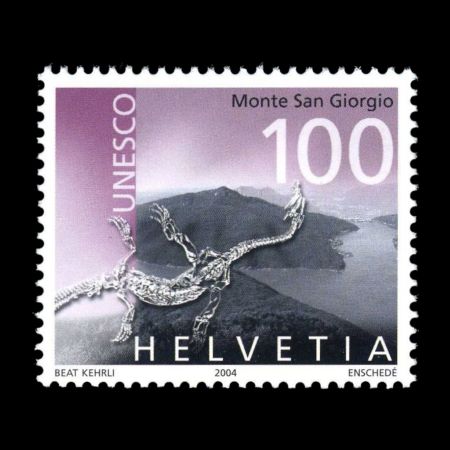 This pyramid-shaped, wooded mountain between the southern arms of Lake Lugano is the best fossil record of marine life from the Triassic Period (230-245 million years ago), when a lagoon covered the area, the area had a tropical climate and a sea full of coral, fish, (long-necked) reptiles and turtle-like creatures. The fossils of these animals were found well preserved in what had been a sea basin.
The long history of study of the site, and the disciplined management of the resource have created a well documented and catalogued body of specimens of exceptional quality - fish, ammonites, crustaceans but also reptiles, insects and plants. Monte San Giorgio provides the principal point of reference, relevant to future discoveries of marine Triassic remains throughout the world.
When mines were dug at Monte San Giorgio in the 2nd half of the 19th century, to extract oil from butuminous shale, the fossils were discovered. Over 10.000 specimens have been found. They include large skeletons of vertrebrae up to 6 metres long. The quality of preservation is very high and a number of 'first discoveries' of species have been made here.
The site can be compared to Ischigualasto / Talampaya (same period, but not marine) and Dorset and East Devon Coast (partly same period, but not the same quality/quantity). Ideally, the site should be extended into Italy, as many important findings were discovered there.
The fossils are displayed in museums in Zuerich and Lugano, and in the local area (Meride, Besano, Induna Olona).

Note: Some time this stamp is sold on some internet auctions and shops together with another set "Unesco World Heritage: Switzerland" from 2003, MiNr: 1846-1850